IZAKAYA! (Nombe Is My Hombre)

Sorry, my Spanish is a little bit rusty and I don't know what I was trying to say, but I used a Spanish-English translator to translate whatever I just said and the result was: "Hello boys, my cat you want fresh milk!"

Anyways, I tried out a relatively new restaurant on Mission and 21st called Nombe. Even though I just wowed you with my Spanish speaking skills, this restaurant does not serve cuisine from a Spanish speaking country. The word nombe just sounds like Spanish, but according to their website, the word refers to "someone who likes to drink heartily" in Japanese. I gladly accepted that as an open invitation to do sake snooters out of our waiter's bellybutton til I was forcefully removed (by the scruff of my neck) from the restaurant by the SFPD.

Nombe is an Izakaya style joint, which means the plates are smaller and the dishes are like Japanese tapas. When I was living in LA, one of my favorite restaurants was an Izakaya restaurant called Furaibo and my loins ache for their eggplant/beef tongue/soft shell crab/everything every damn day. I've been hurtin for an Izakaya squirtin for a while, so I was eager to ride Nombe up and down like a teeter totter, as Turf Talk would say. 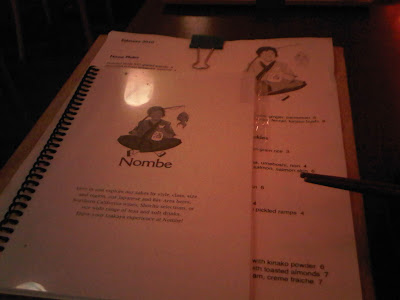 I'm trying to watch my figure, so I just licked the menu in place of an aperitif. Surely, there had to be sake residue on it somewhere. 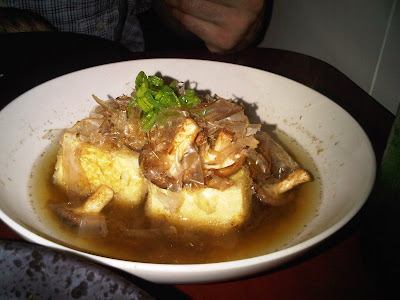 I LOVED the agedashi tofu with the shiitake sprinkles on it. It reminded me a lot of the eggplant dish I used to get at Furaibo because they were both floating in some kind of a porky stew. PORKY STEW, WHAT IT DO!!! 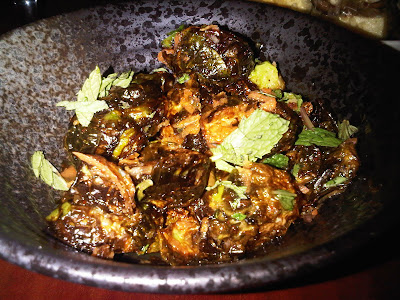 The brussel sprouts with mint, carrot, and togarashi. The flavor was intense and it confused me but what was not confusing was the fact that I loved it. Love is blind. It also made me wince a little because it had a little bit of a tang that I couldn't identify. I'm guessing that was the togarashi? Have no clue what that is, too lazy to Google it, but it concerns me that it has the word "rash" in it. Whatever, 5 STARS! 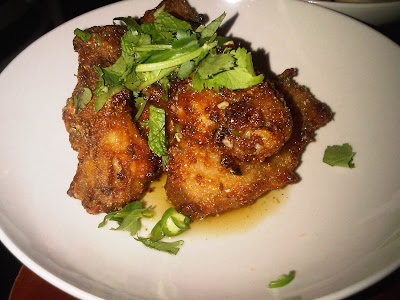 HITTTTTTTTERS! Honey and chili sauce wangz moved me to tears. Or I got grease in my eyes? ;p 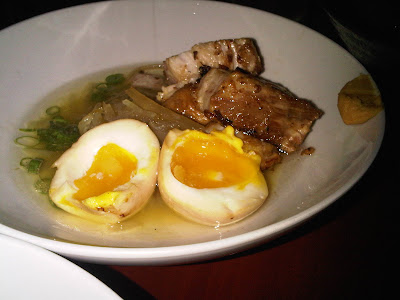 Naturally, the polk berry (pork belly) stole the show because duh, it's fatty and gorgeous. It was atop a bed of stewed onion, some other Japanese shit, and eggs...RICH, right? That really don't confront me none though cause I took it over my knee and had my merry way with it. 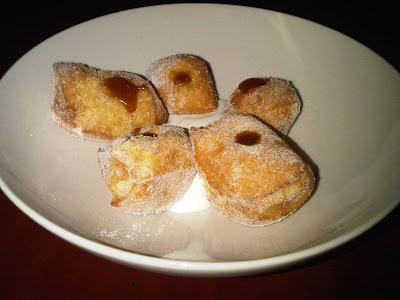 BEIGNETS with orange jam and creme fraiche. Not very Japanese, I guess this place is a little fusioney but again, not a problem because what kind of an asshole discriminates against beignets?

Everything I had at Nombe was gloriously tasty and I cannot decide which dish was the best because they all blew me away in their own individual ways. I also would like to compliment them on the miniature urinal they have on the wall of the ladies room that they turned into a flower vase. It took my breath away.

I have some random items I'd like to share because I have a shit ton of photos on my phone that can't go unshared because I like to make people jealous of what's in my gut. 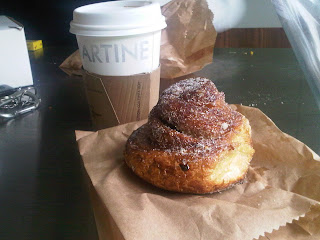 The infamous morning bun from Tartine. I was expecting it to be overrated but it was pretty damn good. It wasn't a revelation or anything but I certainly did not mind getting shards of morning bun lodged into my gums. That's what she said? No, no...out of context. 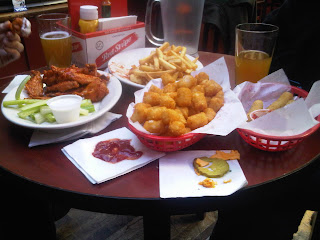 Superbowl Sunday was celebrated properly at Bar None on Union Street. The 10 foot mountain of tater tots was overkill though...UGGGGGH. 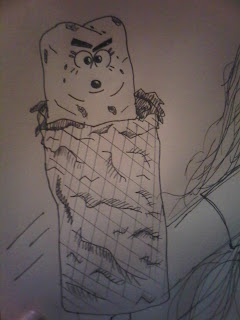 I drew a picture of a disturbed burrito flying into my arms. The rest of the picture sucks but the expression on that burritos face is priceless. 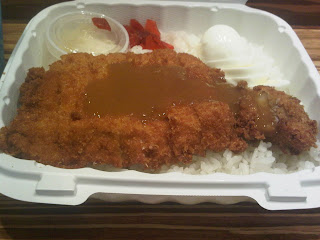 The chicken katsu curry from Muracci's. If you couldn't already tell, I'm trying to do the 7x7's 2010 Big Eat SF: 100 Things To Try Before You Die. Shit was good, but most katsu curries tend to taste the same to me. 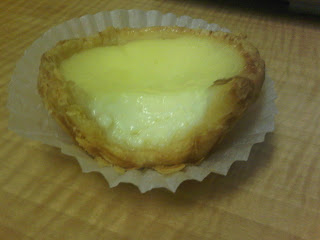 A dan tat or egg custard tart from the Golden Gate Bakery on Grant in Chinatown. This is hands down one of my top 5 favorite desserts in the city. The flakey, buttery crust crumbles so sensuously and the creamy custard taste like clouds. Now I think I'm gonna have to get a box after work tomorrow. 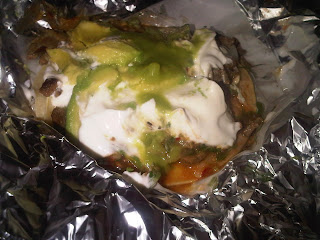 This is a carne asada super taco from Guadalajara's aka GUADS on Mission/Onondaga. This ought to be on the list cause FUCKIN LOOK AT IT. This is from the night me and my friends went here, we only had $5 between the 3 of us and so this taco was all we could afford. We shared it and cried a little bit because we realized that we were a bunch of taco sharing squatters.

ONE MORE THING and dibs on my family for this one, but my roommate (my mom) has been concerned about all these earthquakes going on and so she decided to designate destinations for us to meet at in the event of an emergency. One of which is the Honeybaked Ham store on Divisadero and Geary in San Francisco and the other being a Chinese restaurant called Daimo, located in the Richmond Ranch 99 parking lot. Of ALL the places in the Bay Area, she chooses HONEYBAKED HAM and DAIMO.
Email Post