Yesterday, I was taken aback by a startling e-mail that I received from a fellow named "Casper" from Yelp.com HQ. It contained this message:

We're writing to let you know about our decision to remove your review of Tortilla Coast. Your review was flagged by the Yelp community, and our Support team has determined that it falls outside our Review Guidelines (http://www.yelp.com/faq#great_review) because it lacks a first-hand experience of the business.

We review every situation with detail and take the removal of reviews very seriously.

Removed Review: I have never been here but it gets 5 stars because its called the TORTILLA COAST. 'Nuff said.


.......................uhhhhhh, what may I ask is wrong with giving a FIVE STAR REVIEW to a place you've never been to? It's not my fault it's inconveniently located across the country in WASHINGTON D.C. Trust, if it was in San Francisco, I would be Tortilla Coasting my ass off but it's not and I'll give a place 5 stars for being properly named if I damn well feel like, AIGHT CASPER??

Also, T-Coast better watch out cause they got some haters monitoring and flagging their reviews pretty aggressively. I'd say more threatening things but the T-Coast is located on Capitol Hill, so its possible the Feds are the ones hating on The Coast. I don't want to make any speculations as to why the Feds may be trying to conspire with Yelp against the Tortilla Coast but all I have to say is, have mercy on them because all they're trying to do is serve margaritas and (probably) mediocre tacos to lowly staffers on The Hill. Again, I'm not trying to make any false accusations because I don't want to end up in the FBI Headquarters building, getting cavity searched because I accidentally uncovered some kind of government conspiracy against bootleg Mexican restaurants on the eastcoast. Although, that would mean I get to visit my friend, Steph in D.C. and then I could visit Ben's Chili Bowl :)

On a lighter note, I ate delicious ceviche the other day at La Mar Cebicheria Peruana in San Francisco. It's located along the Embarcadero at Pier 1.5, which is next to the Ferry Building. Me and my homie went to grab drinks and noms around 3 on a Sunday, so we were there in between lunch and dinner hours. We were limited to ordering from the bar area and all we could order was ceviche and causas, which was okay because they were amazing and I didn't have to unbutton my jeans afterward.

*WARNING: These photographs that I look MYSELF are disturbingly arousing.* 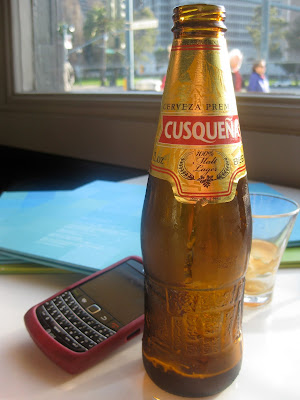 This is a Peruvian beer called Cusquena. It was light, delicious and complimented the sea creatures beautifully because it was like having a beer aquarium in my mouth. 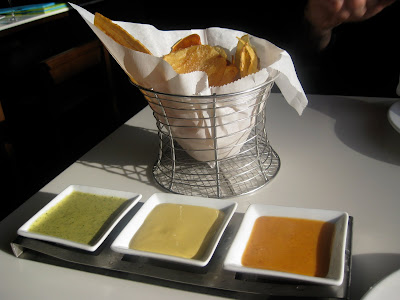 Bombass plantain and potato chips with a trio of salsa-esque dips that made my butt quiver with delight. 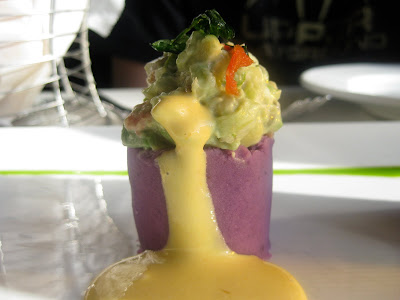 This is the Causa Casera. The top is a mix of artichokes, asparagus, avocado and
tomato confit with basil cilantro oil and the bottom portion is made of purple potato. It looks like play dough but tastes like sexy. 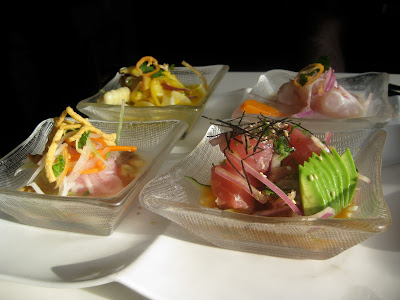 Got the cebiche tasting with 4 different kinds of cebiche. It came with the Mixto (Mahi-mahi, octopus, and calamari), Chifa (Mahi-mahi with Chinese accoutrements), Clasico (halibut), and Nikei (ahi tuna). 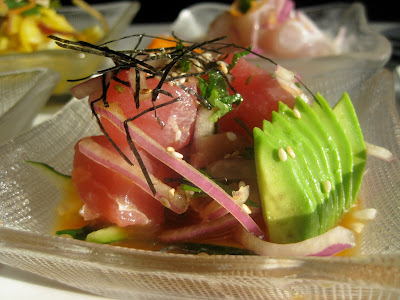 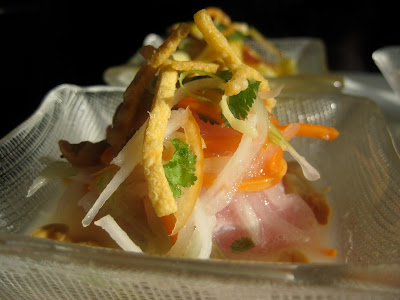 The Chifa was my favorite because they were smart enough to incorporate fried wontons into the cebiche. Fried + Raw Seafood = Nudity.

Naturally, I needed some pie after all that light freshness. Hit up Mission Pie for some gorgeous pies and coffee. They pride themselves on being green/sustainable/organic and all that good stuff, which is admirable and makes me feel slightly less fat, even though I know none of those practices guarantee weight loss. 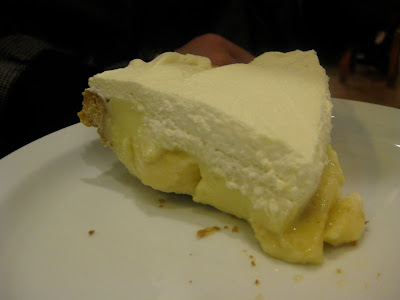 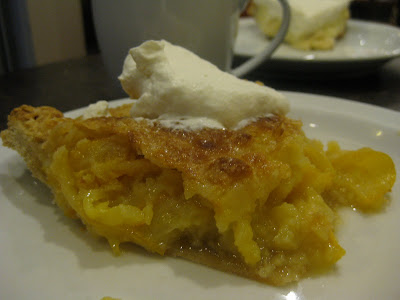 I think the best part of my experience was the charming youth working behind the counter who was shamelessly rapping along to every song on the radio while reluctantly helping customers. Reminded me of a younger me.

On a side note, I hopped up out of bed, turned my swag on, took a look in the mirror and said, "You look like Rick James today." Thank god for hot irons.
Email Post

Brandon West said…
I'm a manager at Tortilla Coast. We got a good laugh from your Yelp review. Let us know when you do get to DC so you can review us for real. I'll buy your first margarita.

Betty said…
I'm a tortilla coast fan AND I can tell you that the restuarant critic for the Washington Post gave that Peruvian restuarant you wrote about five stars!
March 15, 2010 at 6:42 PM

Unknown said…
Your review just tickledmy fancy even when reading it at an ungodly early hour before starting a soul and authenticity sucking day of work. Do you have a blog, website, or anything other writings you can hook me onto?
March 17, 2010 at 4:15 AM