Shit, I forgot I had a blog until I got an e-mail notification telling me they were gonna shut down my domain if I didn't fork over ten bucks. It was a tough decision, but I decided to just renew my domain for the sake of the American public. Heaven knows what they and the rest of the world would do without www.adventuresofafatass.com.

Anyhow, like Ne-Yo and every other basic bitch on the planet that's watched Netflix's sensational new horror film, What The Health, I pledged twenty five cans of red paint to PETA and announced (to my cats) that I would adopt a plant-based diet. I had eaten an egg that very day, which according to the film is the equivalent of smoking a cargo pallet of cigarettes, and my body was being terrorized by a belligerent group of carcinogens. The decision to choose forks over knives was a matter of life and death, so I chose LIFE.

I immediately jumped in my Prius and drove full speed (60 mph) to my local Trader Joe's to find plant-based sustenance. I did a lot of extensive Googling and found that many of their items were vegan friendly, so I filled my shopping cart with thirty of these and went on my merry vegan way.

Shout out to Trader Jose's for making veganism a total breeze and relieving me of the awkward burden of having to interact with fresh produce.

After a couple days of diligent frozen enchilada consumption, I found myself at a crossroads when I attended a happy hour that involved $1 oysters. What The Health failed to mentally prepare me for social situations where I might be surrounded by flesh-eating degenerates (friends), who will cruelly invite me to places slanging discounted crustaceans. How is one supposed to know that a place called Big Catch Seafood House would be filled with tempting shell meat deals?!?!?! 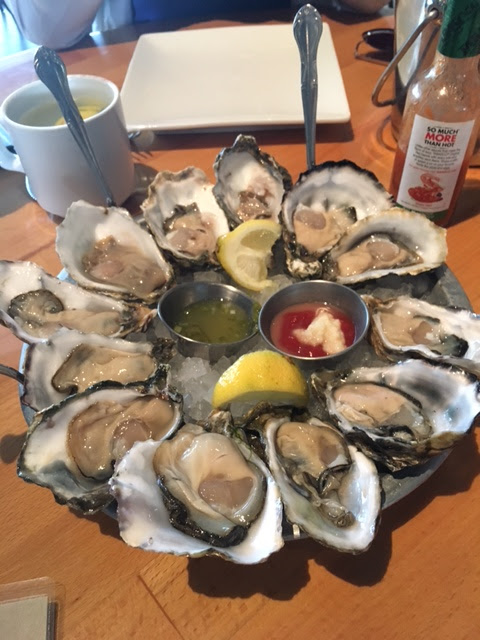 ALAS, I am Asian and cannot say no to a discount, so I limited myself to a dozen. My cultural disposition to eating sea life and saving money ultimately overpowered my vegan spirit. RATS! 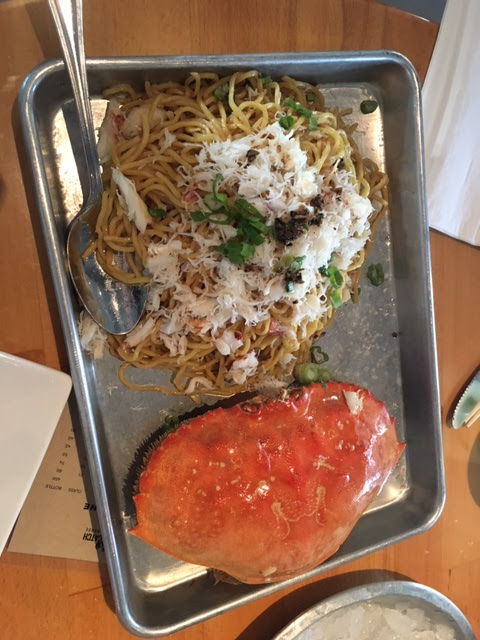 I was placed between a rock and hard place when I noticed the truffle crab noodles on the menu. "Is that vegan?" I asked myself, to which I responded by whispering to myself, "There's only one way to find out." So when the dish arrived on a steel surgical tray with a gutted crab shell, I realized that this may not be vegan-friendly. But it was far too late to return it to the kitchen, because it had already found its way into my mouth. Clearly uni is part of a plant based diet because we are merely borrowing the gonads of a sea urchin to make beautiful pastas like this and everyone knows sea urchins are willing to part with their reproductive organs for the sake of human enjoyment. But the real questions is: are gonads considered eggs? As I now know, eggs = carcinogens = cigarettes and that is no bueno because I am a lot of things and an asthmatic smoker is not one of them. But I am not a marine biologist, so I suppose I will never know how to properly categorize sea urchin gonads. 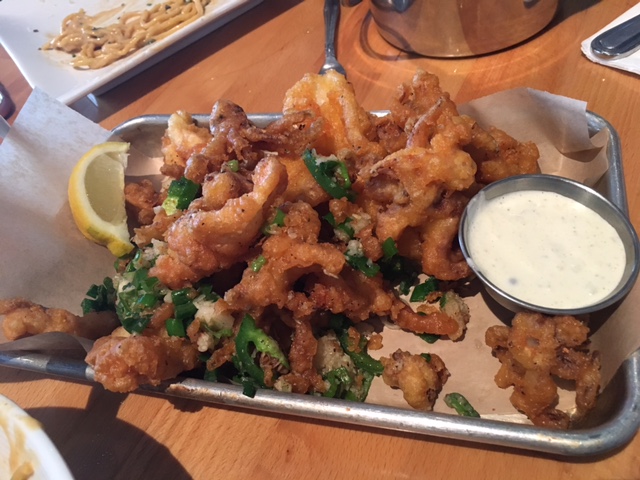 Calamari. At this point, I just stopped asking whether things were compliant with my new diet and was likely too drunk to care because HAPPY HOUR.

After that embarrassing public display of carnivorous indulgence, I retreated back to my freezer and ate three trays of enchiladas as a form of penance to the PETA gods.

A couple days later, I found myself face to face with the same predicament. I had met some friends at Jon & Vinny's, a restaurant that has emerged as Los Angeles' premier meatball and pizza emporium. Surely, they would have some vegan options... 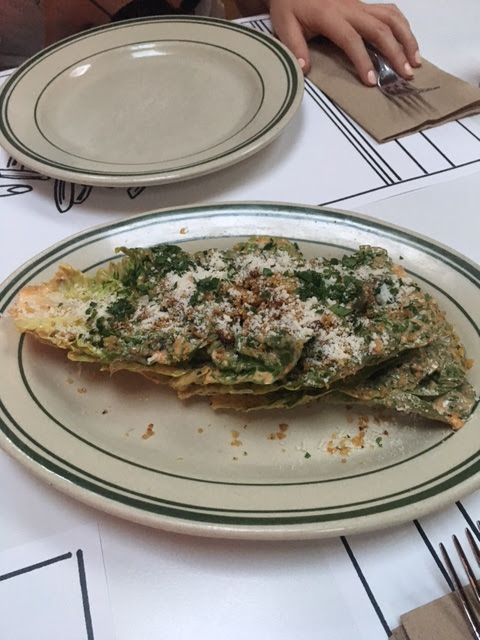 We started out with the little gem salad with chili's and breadcrumbs. PLANT-BASED AF. 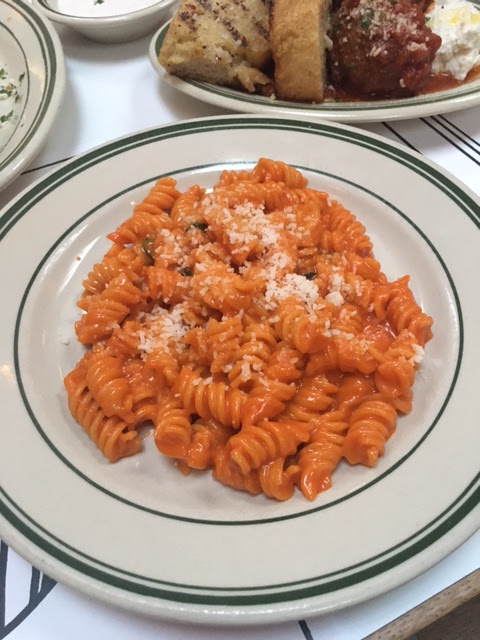 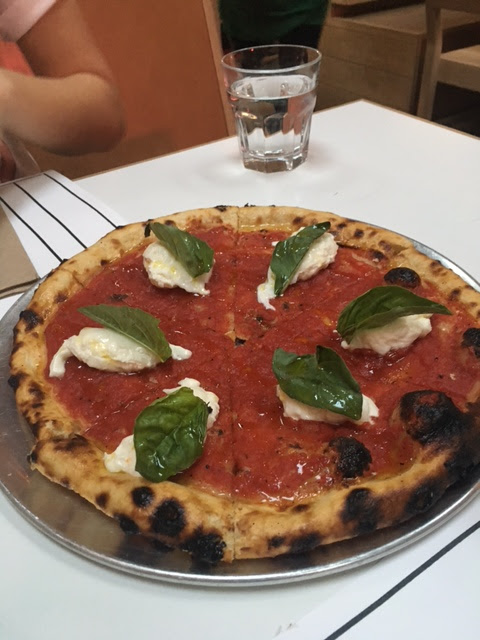 Next we ordered the LA Woman pizza, which was just tomato sauce (vegan), basil (vegan) and large globs of burrata on each slice. Two outta three toppings were vegan? And come on, burrata is the precious nectar extracted from the mozzarella flower - it would be downright disrespectful to not motorboat a glob of burrata. 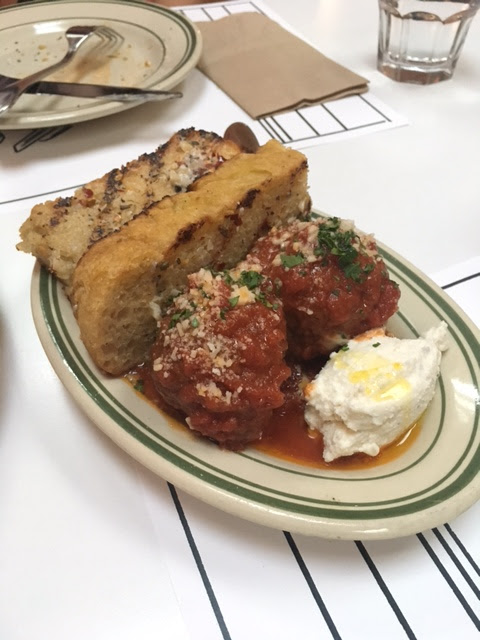 MEATBALLS with a glistening glob with burrata. After I bit into this juicyass meatball, I swore up and down to burn all my TJ's enchiladas to the ground.

Listen, I'm confused. I don't know what to eat anymore - between lectins, Okja, Russell Simmons and the recurring nightmare I keep having where the Taco Bell chihuahua keeps asking me the where the fuck I've been - I am crippled with the fear of dying by way of meat consumption and the fear of missing out on melted cheeses.

Until I'm able to wrap my head around plant-based living, I will continue to consume frozen TJ's enchiladas by the truckload and pretend I am not eating meat when people ask how my diet is going. 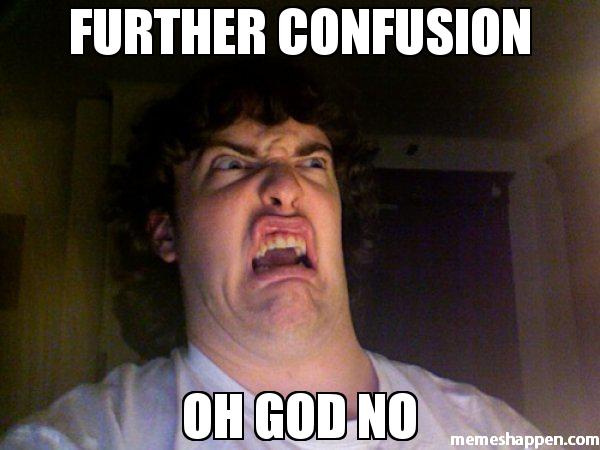