Fists all across the globe have been furiously pumping ever since MTV debuted its greatest and most poignant contribution to American culture, Jersey Shore. These glowing, saline spectacles have captured the hearts of billions worldwide with their eloquence, incomparable style and by making human mutation look endearing. More notably, physicists have been stunned by the entire casts unnatural abilities to distort space/time in gravitational fields with their daring use of hair gel and Bump-Its.

Personally, I was impressed by their expertise in the art of RAGING and what really caught my attention was cast member, Ronnie's alcoholic concoction called, "Ron Ron Juice." Basically, he throws ice, watermelon, cherries, cranberry juice, and vodka into a blender and all hell proceeds to break loose. 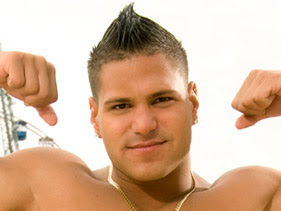 Never mind the muscles, with a face like that, this man is well on his way to becoming a Flex magazine centerfold and the new spokesman for Muscle Milk.

Peep this video where he unleashes the mighty juice upon The Situation and some other salty Guido that he lives with:

Jersey Shore - MTV Shows
I think that if they played this episode of Jersey Shore at the Copenhagen Climate Conference, it probably would have gone a lot smoother.

Anyhow, I decided to try making Ron Ron juice on my own because like Ron Ron himself, I too like to consider myself a cocktail connoisseur. I had to tweak the recipe a little bit because I am not as classy as the Jersey Shore kids because I do not have access to a blender or fresh fruits, so I had to improvise. Thus, here is my recipe for "Ghettoass Ron Ron Juice":

So, I headed to my favorite 711 on Taraval Street in San Francisco or the "Murdah Block" as me and my friends like to call it and I got the party started over there. 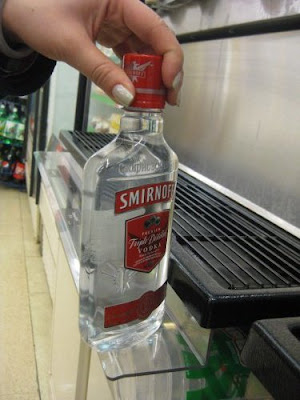 First, I copped one of these bad boys from the liquor store across the street and then discretely snuck it into 711. I grabbed two 28 oz Slurpee cups and split the contents of the Smirnoff between the two Slurpee cups. (Both were not for me, my homie Jizzo agreed to do this with me.) 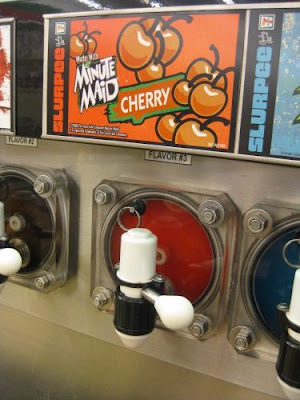 Then I filled 2/3's of the cup with Minute Maid Cherry Slurpee. 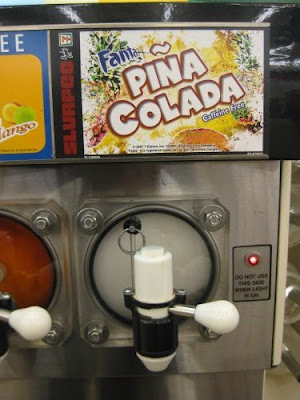 Added some Pina Colada Slurpee into the mix for some Westcoast flavor. 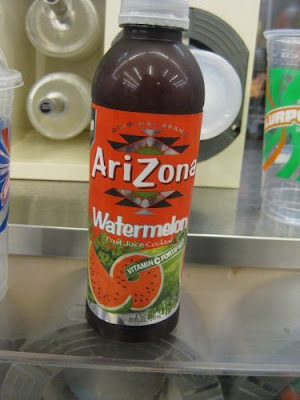 Added some Arizona watermelon juice to substitute for the watermelon chunks that I didn't have because 1) I'm ballin on a budget and 2) it's December and watermelon is not in season.

I skipped the cranberry juice entirely because I forgot it, whatever...add it if you like. 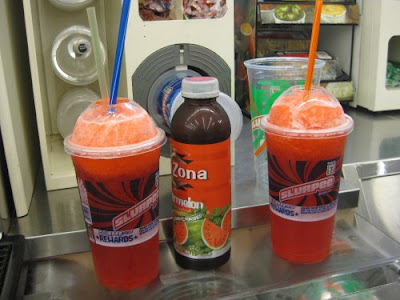 Garnished the drink with double straws, slicked back my hair, and did some fist pumps to top everything off.

Next, Jizzo and I headed to the local playground in the 40 degree weather, drank our Ron Ron there, and proceeded to get frostbite. I don't remember too much after that except meeting our friends up at a bar, barfing, and then ordering a personal pizza. Got a text the next day from Jizzo asking me why she had Ron Ron barf splattered on her boots. Thus, I am helping Jizzo sue Ron Ron himself because I believe he is responsible for the mess on her boots.
Email Post