I've been putting this off for quite some time now and I think it's time that I paid homage to one of the greatest chicken wing spots the world will ever know, Kyochon. They are famous for their fried chicken, particularly their garlic-soy original flavored chicken which is in my opinion, one of the most addicting things you could put in your mouth. They have sat plates piled high with Kyochon wings in front of me and the next thing I know, my fingers and face are drenched in soy-garlic glaze and am then slung over someone's shoulder and carried out. They are delicious, but DANGEROUS...in a good way.

The location that I frequented when I lived in Los Angeles was the one located in the heart of Koreatown on 6th and Berendo Street. I recall my first experience there being magical, but not as impressive as the other times I went, probably because I had to share with a larger group of people. Not my style. Also, we ordered different types of flavors such as the spicy wings and the grilled wings, which are alternatives to the original garlic-soy. Although they too are flavorful and delicious, I just cannot handle the amount of spice in these wings. The grilled wings, which are supposed to be a healthier alternative to the fried wings are just straight up hotter than all hell. Its like they seasoned these with crusties from the devil's ass crack and don't tell you how goddamn hot they are because they like to see people weep and burst into flames. Anyhow, I've learned to stick to the OG flavor and order in larger than life amounts because I like to challenge people to wing eating contests.

*PLEASE EXCUSE THE RIDICULOUSNESS OF MY PHOTOS. I AM USING A MAC AND HAVE NO CLUE AS TO WHAT THE HELL I AM DOING. ITS A MIRACLE THAT THERE ARE EVEN PICTURES ON THIS POST. GOD BLESS. 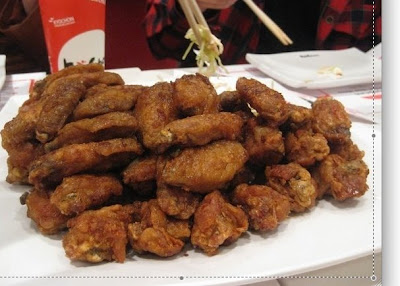 I usually order about 70 of these glorious, golden nuggets to start off with because I'm pimpin' like that. Check out that sexy glimmer that only fried foods have. If these were suspended from the sky, it would illuminate the world in a way that natural sunlight never could. 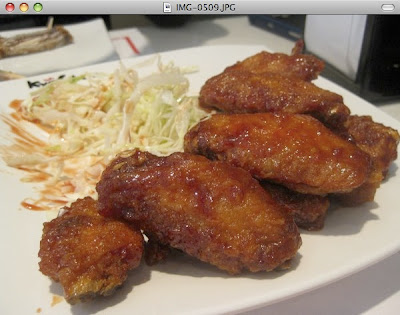 The SPICY WINGS. Heavier on the sauce, way hotter than the original, and OUT OF CONTROL! Well not as bad as the grilled wings. I tried to take a picture of those and my camera spontaneously combusted. Kyochon refuses to reimburse me for my camera by the way. 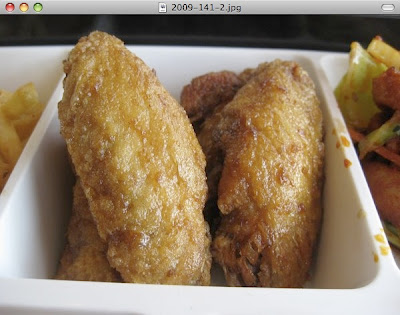 Up close and personal shot of a dynamic duo of winglets that came in a bento box. The bento boxes are good if you want to switch it up and eat more than just wings. They come with various nom noms such as bulgogi and bulgogi fried rice, there are different combinations to choose from. I always try to substitute everything for wings so that I get a bento box full of wings and end up getting kicked out. 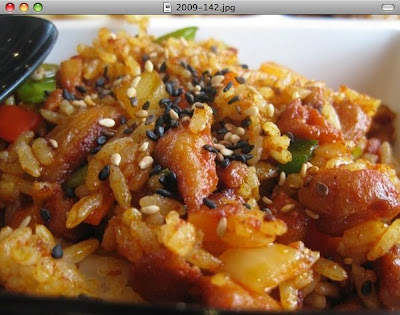 This is the bulgogi fried rice. Ever so beautiful. We made a baby, but I can't show that to you. 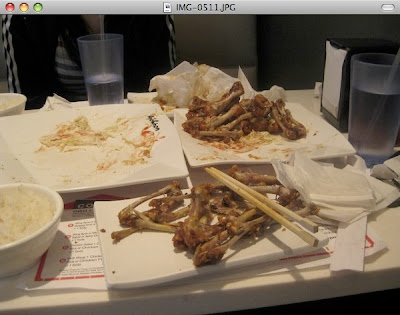 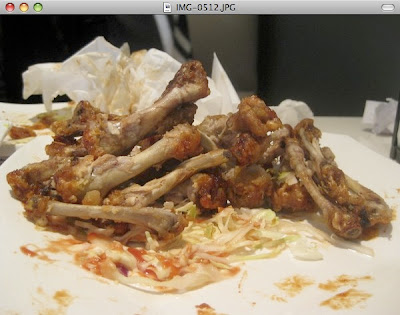 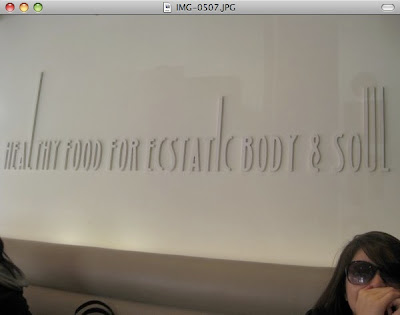 I have fond memories of this place because after I discovered it, I brought everyone I knew here and methodically shoved chicken wings down all their throats until they called me "daddy." Here's a few of those memories:

-So I dragged a co-worker here after a long, hard day of drinking and challenged him to a wing eating contest. We ordered 30 wings but of course, they are saints at Kyochon and they ended up giving us way more. I ended up defeating him 21-19 and we were STILL hungry but too lazy to order more wings. Anyhow, we are no longer on speaking terms because I whooped him so hard and that's totally okay with me.

- Went here with the same guy, we ordered the deadly grilled wings...he burst into flames. Clearly an amateur.

- Brought my roommate here for the first time. Told her we needed to order a minimum of 30 and so we did just that.

Needless to say, this guy underestimated the consumption power of one and a half asian girls. Story of my life...
Email Post