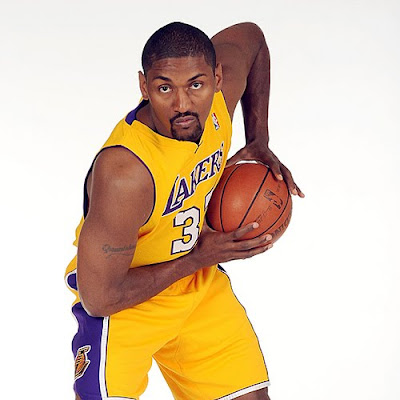 There are times when I want to kick Ron Artest in the face and then there are times I want to cradle him in my arms and bottle-feed him Hennessy at halftime in the back of my Impala. I believe he blew me completely away with his Game 7 post-game interview when he thanked his hood, his psychiatrist, and proceeded to promote his rap single, "Champions" on live television. Precisely the move I would have made had I just won the NBA Finals.

I did a little Wikipedia research on him because I had a feeling it would be highly entertaining and as expected, I was right. Here is an excerpt from the section called "Controversy":

During his rookie season in Chicago, he was criticized for applying for a job at Circuit City in order to get an employee discount.[30][31] He once attended a practice with the Indiana Pacers in a bath robe.[32] He was suspended for two games in the early 2004–05 season by Pacers coach Rick Carlisle after he allegedly asked for a month off because he was tired from promoting an R&B album for the group Allure on his production label.

SIMPLY MAGNIFICENT. It rivals ODB's Wikipedia page for sure and that is no easy task my friends. I honestly didn't think Ron could impress me more until I found the following videos of Ron Artest enjoying a Filipino dessert called Halo-Halo.

Apparently he has a Filipino son, which means there is a 98% chance that I could be related to his son or anyone else in this video for that matter. Thus, RON ARTEST AND I ARE OFFICIALLY (PROBABLY) COUSINS!

This one is my absolute favorite. He is indiscriminately getting down on a cup of Halo-Halo, surrounded by teenagers, and is playing Monopoly. Mind you, Halo-Halo is not a normal dessert--it's shaved ice, beans, corn, jackfruit, assorted jelly crap, condensed milk and ice cream. To be honest, I can barely stomach all that shit (I am not proud of that) and I am Filipino. So, hats off to you Ron Artest for being such a strong advocate of Filipino treats. 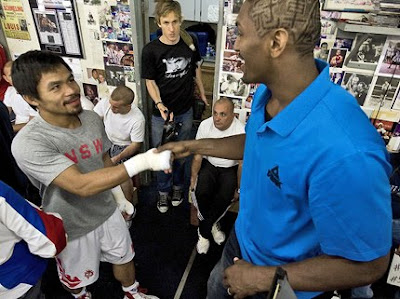 Ron Ron shaking hands with our national treasure, Manny Pacquiao. I feel like supersonic shockwaves were exchanged during this handshake.

Looks like Jordan Farmar's got a lot of catching up to do to get back on my good side.

*Like my new layout?? The old one looked like shit. If you think the old layout looked better, check yourself cause it was not crackin.
Email Post

Viagra Online Without Prescription said…
this is amazing how he extend his hand, just to give a greeting, Awesome, how big is Ron Artest, also he is good player.
August 25, 2010 at 7:08 AM