Up until recently, I did not enjoy Oakland because it seemed as though every time I set foot in Oakland, all hell broke loose. Crackheads would constantly run in front of my car and scream at me. At the Jack in the Box drive-thru, a bum lady hit on me and threw loose change at me. I got my cell phone stolen and a midget ran at full-speed into my face, which made me bleed profusely. And the stories go on and on and on and on (my cipher keeps rollin like a rollin stone). I had no choice but to return to Oakland because 1) I do not learn lessons, 2) I have friends that live there and I am desperate for company, and 3) the FOOD is crackin.

Last Friday, my friends and I decided that we needed to hit up Pizzaiolo in Temescal because we are classy sons-o-bitches. So after work, I grabbed a 40 of Mickey's, jumped in my friend Gabby's curry-scented Corolla, and headed across the bridge to Oakland. 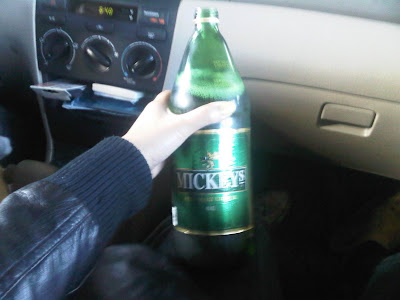 Had to assure the guy at the liquor store that just because I am not in high school, it does not mean I can't enjoy a Mickey's once in a while.

All we knew was that this pizza place was in Temescal on Telegraph Ave and constantly crowded. We spotted a pizza place on a street corner that was infested with hipsters and fixed gears, so we assumed that it must be Pizzaiolo. After waiting for a table and being seated, we realized we were at Lanesplitters Pizza and not Pizzaiolo. Apparently, the five of us lacked the competence to read the huge sign outside that said "Lanesplitters". That's a group of Asian girls for ya. Being that we were ravenous, we decided to split a large pizza and give the place a go because it must have been crowded for a reason. 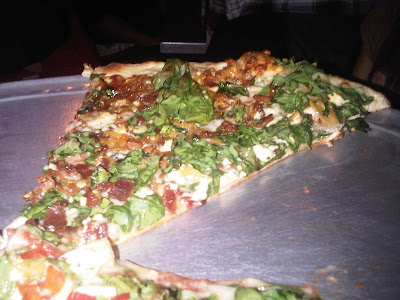 We copped a half "Heartstopper" and half "Splitter", which was fucking enormous. This is a slice of the "Heartstopper", which consisted of bacon, gorgonzola, roasted garlic, and spinach. Whoever thought of this is brilliant and panties off to you, sir.

I also had a glass of a beer called Death and Taxes by the Moonlight Brewing Company. I ordered it for the name alone, but it was delicious considering it was a black beer and I don't drink beer any shade darker than my own piss.

We were still hell-bent on trying Pizzaiolo, so we walked up an entire block to the right place and put our names down on the list. We consulted amongst each other and decided that we should probably just go to Fenton's and get ice cream since we already ate a whole pizza. But the saintly gentleman at the front convinced us to stay by giving us glasses of rose and telling us that they had bees and chicken's in the back. He also mistook us for high school students and asked us if we "just got off of school." 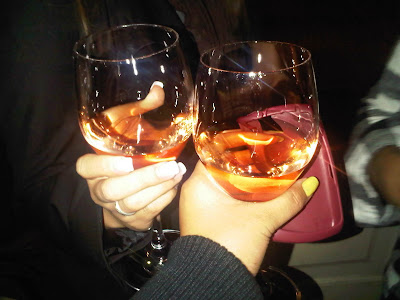 A step up from the Franzia that we usually guzzle straight out of the box. 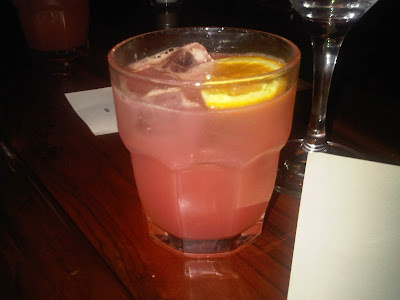 Got a cocktail called the Bungole USA or something along the lines of that. It was good, had a strong ginger flavor, and it was pink. I usually don't drink pink drinks in public because it makes me look vulnerable to rapists but I love them on the low because I possess child-like wonder.

Being that we didn't want to go overboard and had just eaten a hugeass pizza, we decided to get three pizzas. Yeah, WHAT THE FUCK IS WRONG WITH US? 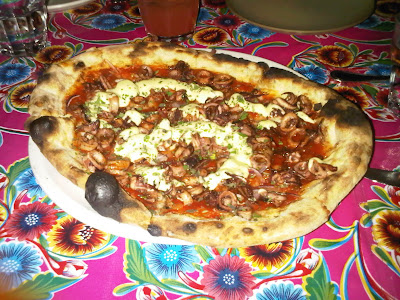 Got two of the Monterey Bay squid, tomato sauce, and aioli pizza's, which was my favorite. Aioli as a pizza topping is a gift from Jesus Christ to fat people. I sacrificed my cat to Jesus when I got home to show my gratitude. 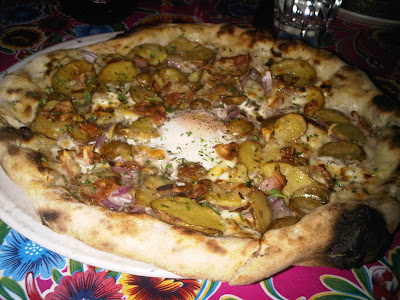 Potato, pancetta, fontina, and rosemary. We added an egg to the pizza because we are educated, sophisticated, and worldly young hoodrats that shop at Whole Foods and pretend to listen to NPR. 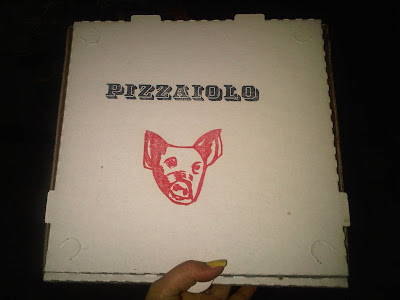 So this is not a pizza competition because both places offer completely different pies and atmospheres. If you want a laid-back place with excellent New York-style thin crust and an extensive beer selection, go with Lanesplitters. Just beware of the wait, generous portions, and hipster asscracks. If you want somewhere a touch more dignified, specialty cocktails and a wine list, an outdoor patio, and less traditional toppings, hit up Pizzaiolo. Both places generally made me feel like this: 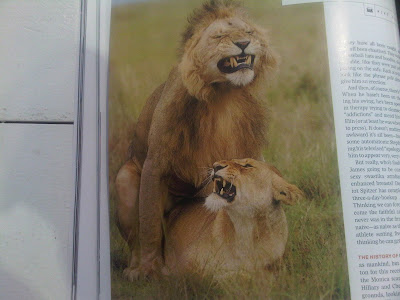 Viagra Online Without Prescription said…
Oh I love pizza, and this is one of the most tasty that I ever saw, now you get me hungry, with this exquisite and delicious pizza.
August 25, 2010 at 7:12 AM