Two very significant burgers have entered my life at the most inconvenient point in time: PRE-VEGAS DIET TIME. As I stressed in my last post, there is a maximum amount of back fat that you're allowed to carry on your body whilst in Vegas or you will be immediately exiled upon arrival. I'm pretty positive that muffin-topping out the top of a tube dress is grounds for rejection by clubs, your friends, and will result in some kind of fine or arrest for public obscenity. I will also probably be victimizing every buffet, bar, and Del Taco/Fat Burger up and down the Strip for 4 days straight, so imagine the magnitude of that sort of calorie intake. On the bright side, God himself created Spanx for the metabolically challenged and I am hoping that wearing iron clad undergarments will diffuse the "pregnant look" I've been accidentally sporting.

Okay, enough about that and onto the BURGERS. The first burger that I have been bumping uglies with on the regular is from Pearl's Deluxe Burgers on Post Street in San Francisco. It just so happens to be ridiculously close to my work place, which means the scent of beefy murder is constantly wafting through the air and into my nasal passages. According to all the signs and stuff posted outside of the restaurant, its won all sorts of awards like Best Burger by SF Weekly, has Michael Mina's seal of approval, and apparently people like them on Yelp. I'm thinking of making decals with my face on it that say, "I'D HIT" and handing them out to my favorite restaurants so they can display them in the windows...you know, so that people know that these are distinguished and highly regarded establishments. Anyhow, Pearl's offers a variety of all-natural, grass fed burger meats at ridiculously low prices (a Deluxe burger will be around $6 and a Kobe beef burger is around $10). You can choose between a regular Deluxe burger made from Neiman's Ranch beef, a Kobe beef burger, chicken, turkey, veggie or buffalo. Predictably, I haven't tried any of the last four varieties but I'm semi-interested in the buffalo burger. I personally cannot identify much of a difference between the regular Neimans Ranch burger and the Kobe beef burger, so I kind of just go back and forth between the two because I usually just swallow them whole. 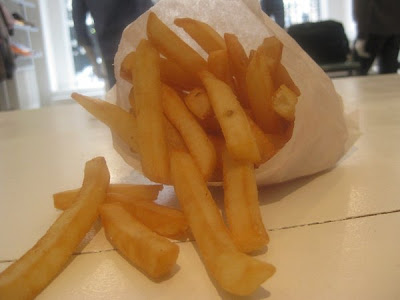 The fries are pretty on point, crunchy and delicately salted...like my hair when I don't put leave in conditioner in it. 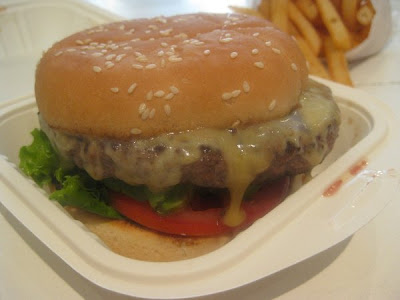 This is a Deluxe burger with jack cheese and AVOCADO. I try to keep the toppings and crap pretty minimal because it lets the beef really shine. 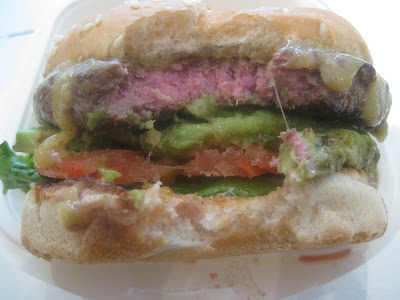 There's nothing more magnificent than the pink glow of beef, engulfed in a blanket of melted cheese and avocado. Aside from karaoke, I can think of nothing that brings me more joy. The juices I extracted from this burger with my teeth are now regarded as the Nectar of the Gods. (I sent the juices to the Vatican and they officiated it, don't trip. I speak no blasphemy.)

And now for the Mission Burger. The Mission Burger is a new offering from the fine folks over at Mission Street Food's. It is located inside the Duc Loi Supermarket on Mission and 18th Street in San Francisco and is open everyday except Thursday from around noon to 3 or whenever the burgers run out. Duc Loi donates $1 from the sale of each burger to the San Francisco Food Bank, so you are actually being saintly for eating a burger. According to the Mission Street Foods website, the burger contains 1/3 lb of aged Harris Ranch brisket, short rib and chuck, granulated and seared in beef fat. Served with Monterey jack, caramelized onion and caper aioli on an Acme bun.

Being that I am lazy and ill-informed, I knew of this burgers existence but never got around to asserting any energy into seeking the burger myself and didn't understand how they were operating this burger mission. As luck would have it, my homies at work were kind enough to grab me one while they made the trek from the Financial District to the Mission for lunch. So...they first couple bites were mind blowing, the meat with juicy and tender, the aioli sauce added a garlicky richness, and the caramelized onions complimented everything quite erotically. I soon started to realize that my entire face and hands were encased in what looked like Vaseline and could no longer open my eyes because the burger sent me into a greasy stupor. I finished the burger, but I felt like the burger finished me. 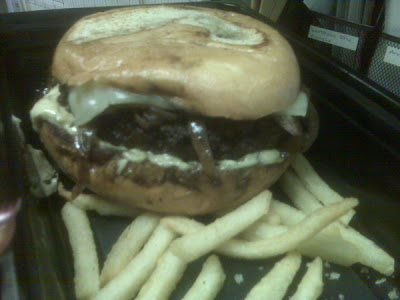 This is the crappy picture I took with my blackberry. It hardly does it justice, but you can see the amount of grease excreting from this arterial assassin.

Its delicious, but eating an entire burger that is this rich probably cut my life expectancy by at least a decade. You might want to split this with no less than 8 other people or if you're planning on committing suicide anytime soon, eat two. I heard the vegan burger they serve is excellent but I'm morally opposed to to choosing vegan options over carnivorous ones.

ALSO, if my blog looks funny to you, its cause its in transition. The address will officially be http://www.adventuresofafatass.com in a couple days, so bear with me. It can still be accessed through http://www.gluttonousboner.blogspot.com, so don't trip. I don't know shit about computers so it might be a while before I get it right.
Email Post
Labels: Mission Burger Pearl's Deluxe Burgers San Francisco

jessica said…
u have the best food blog ive ever read, ever..and i go to a lotta food blogs considering ima fatty/foodie. you're hilarious. i live in the bay area too so that makes it even better.
September 26, 2009 at 9:37 PM