They Will Call Me Skinny Cakes Malone

As I embark on my 40th and most intense diet of this year, I have to bid farewell to my exquisite belly. I am going to VEGAS! in November for my birthday and must lose as much weight as humanly possible before that time. My friend, Jizzo and I are competing against each other to see who can lose the most weight before then. Loser buys the other person dinner and when I defeat her fat ass (Girl, I'm just talkin shit...you know I don't think you're fat. And I mean that. No homo. <3) I will be ordering 90 oz rib-eyes, poppin' bottles of Dom, and river dancing Michael Flatley-style with some strippers at the Spearmint Rhino...all whilst being skinnier than everyone else in VEGAS! After all, it is disrespectful to show up to VEGAS! looking like a fat person who does not dance for money.

So as I'm sitting here plotting ways to sabotage her diet (i.e. sending her Honeybaked hams, Omaha steaks, canceling her gym membership...etc.), I'm also saying goodbye to all the wonderful things I've shoved down my throat over the past few weeks. Here are a few of my latest and greatest conquests...

I am still convinced that Guadalajara's on Mission and Onondaga is the best taqueria in San Francisco but I heard that La Taqueria and Taqueria Cancun were pretty crucial too. So I decided to take matters into my own hands and settle this feud myself by eating burritos at both places. After visiting both places, I have decided that Guadalajara's reigns supreme and shits on both places in terms of burritos. If anyone disagrees, I will fight you. And you do not wanna see my arsenal because I own weapons that are so far beyond your realm of possibilities, you will not know whether to shit your pants and surrender or have me deported. ANYHOW...peep game. 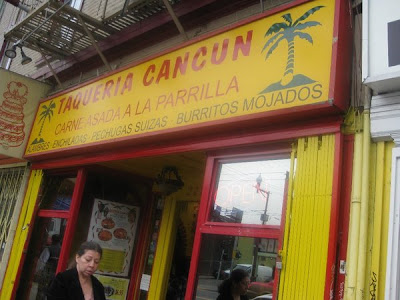 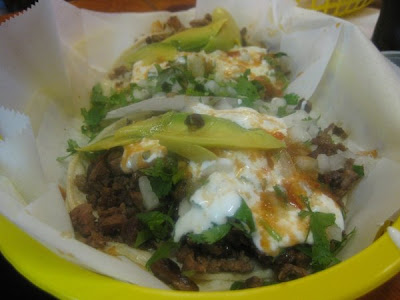 Some carne asada tacos. I didn't eat these but my friend said they were good. They're pretty similar to the Guad's tacos. UGGGGHHH...my diet hurts. 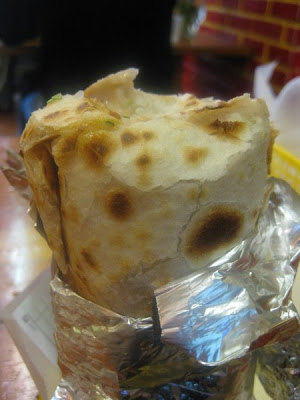 Okay so I ordered the usual Super Carne Asada Burrito with extra sour cream and they gave me CARNITAS instead. I mean it was tasty and not bad, but I'm really not trying to eat pork when I'm set on STEAK, FEEL ME? It was just really upsetting and I don't even really wanna talk about it but here we are, bringing up painful memories of a HORRIBLE MISTAKE. Or shall I say MISTEAK...what a fucked up word. So me and Cancun aren't really on speaking terms right now ;X 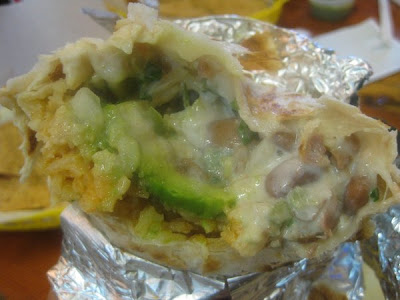 It looks all dreamy and cloudy like a hoodrat studio picture. Ya'll know what I'm talking about. You know you remember gathering 20 of your closest home girls in high school, corn rowed each other's hair, put on matching Jordan's, and went to the mall and took 1,000 wallet sized pictures. Or perhaps that was just me and my friends. 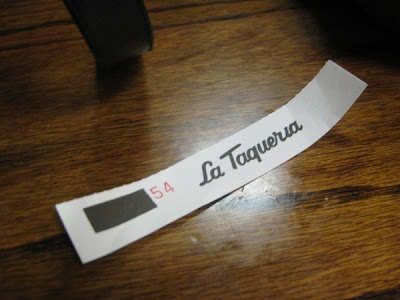 LA TAQUERIA! When I was in line, the old lady behind me asked me why I was taking pictures of everything and I cried, "IT'S ALL SO BEAUTIFUL!" And we cheered and laughed and high-fived. Apparently, this embarrassed my brother. 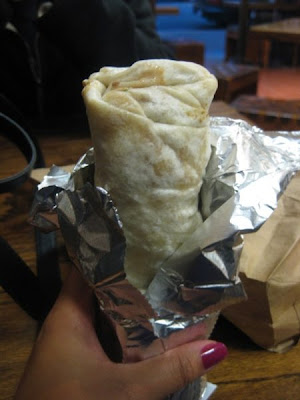 Now I don't know why these people gave me a burrito so SMALL. I know sometimes I get mistaken for a teenager because of my boyish good looks, but I am a GROWN WOMAN. I do NOT eat baby food, except for on special occasions. But THIS was not one of those occasions, I wanted a missile full of BEEF, not a beef pencil for midgets.

After consulting/confronting many La Taqueria enthusiasts, I learned that I did everything wrong because they're known for their tacos and not their burritos. I could see how that would be because their burritos are microscopic and responsible for worldwide famine. So...to be fair, I need to give both places a second chance. AFTER VEGAS. (Jizzo, don't think you're gonna catch me slippin cause it ain't gonna happen...NOT NEVA!)

Next place I humped til the cops came to collect me is called The Front Porch in the Bernal Height's district of San Francisco. My food genius friend, Jenn (HAYYYY!) put me onto this place and when she says to go somewhere, I fuckin do it cause she really knows whats up food-wise in the city. Front Porch serves Southern-style comfort food and the place is homey, serves plenty of frieds, and I want to have its babies. For practical reasons. Weird how I always want to have babies with inanimate objects like restaurants. Only in a perfect world... 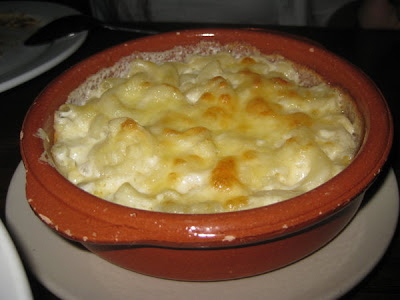 This is the MAC AND CHEESE. At first I thought it was a little bland, but it's creaminess creeps up on you and hits you like a cheese bullet, directly in the groin. Simply splendid. 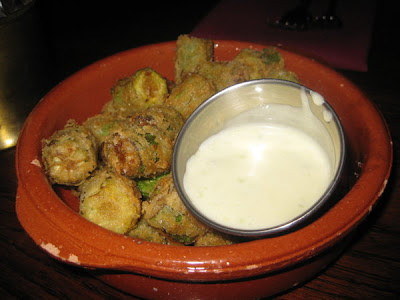 FRIED OKRA WITH JALAPENO AIOLI. Well, suck me sideways...this was AMAZING. MOVE OVER ONION RINGS...the fried okra parade is in town! And it's fixin to kill you. I wanna lather my face in the jalapeno aioli by the way. 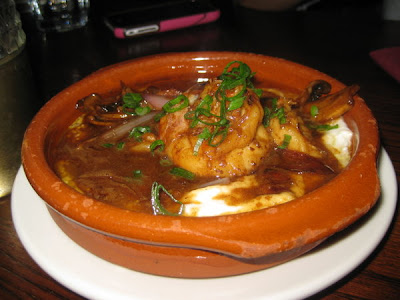 The SHRIMP AND GRITS was the most butt-clenchingly delightful dish in the world. I spend a lot of time recounting the first bite I had of the grits. They were cheesy, buttery, and next thing I knew, I didn't have any clothes on, my friends left and had instantly de-friended me on Facebook. Good grits just have that effect on young, impressionable girls such as myself. 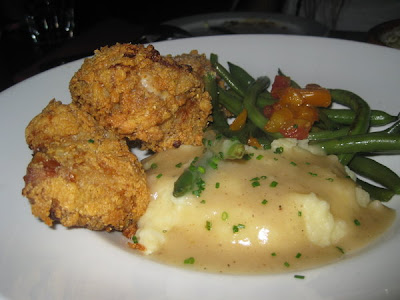 LE FRIED CHICKEN! You can order these in bulk and they come out in a bucket, but since my friends and I are sensible young ladies, we only ordered a few pieces. Needless to say, we regretted it because we were still hungry :( It's hard having that unfortunate disease with a long, confusing name where you eat constantly and your hunger never subsides.

NEXT STOP ON THE SEXY TRAIN...HUMPHREY SLOCOMBE! Or as I like to call, HUMPME SLOWDOE! Cause that's precisely what it does to your palate. 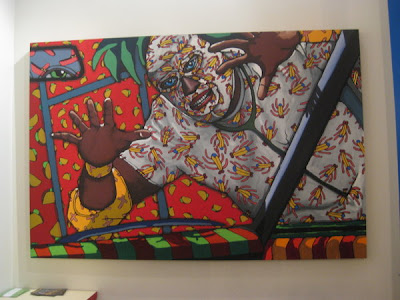 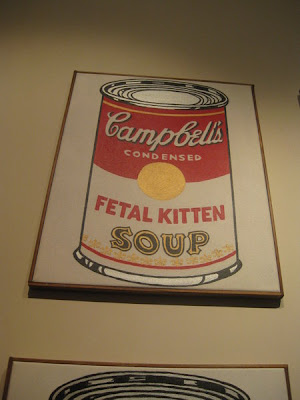 The artwork on the walls are my favorite. 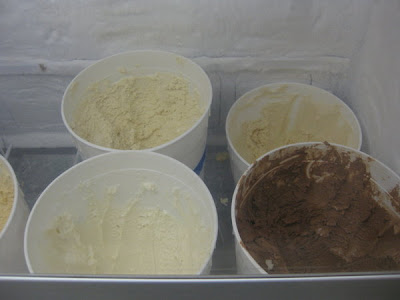 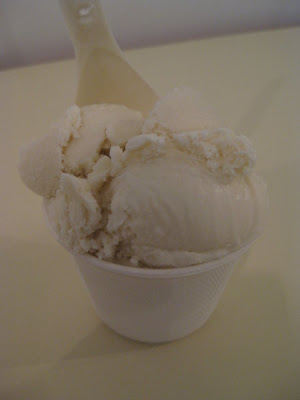 I came for the 21st Amendment watermelon wheat beer ice cream and I also had the white miso peach. I LIKE IT A LOH!

And finally, my visit to TARTINE. Another gem of an establishment in the Mission. 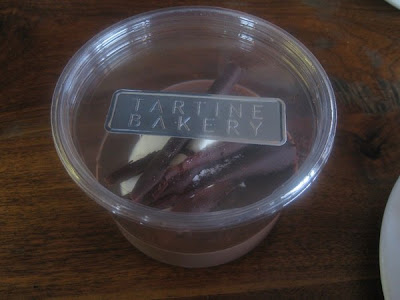 My cousin had the chocolate pudding. RICH GOODNESS. 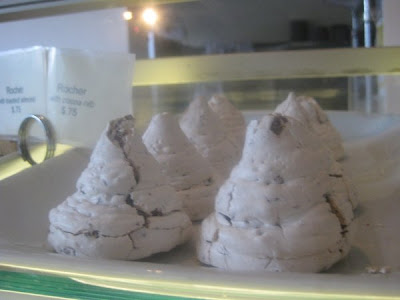 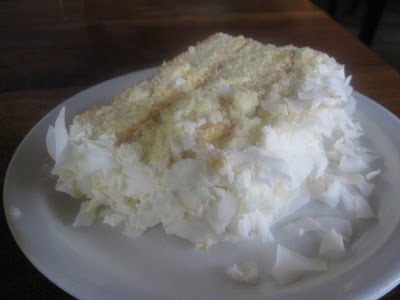 I had the coconut cake with passion fruit Bavarian cream filling. I was on a coconut cake hype and I couldn't resist the heavenly coconut shavings blanketing these sexy cakes. We got down. 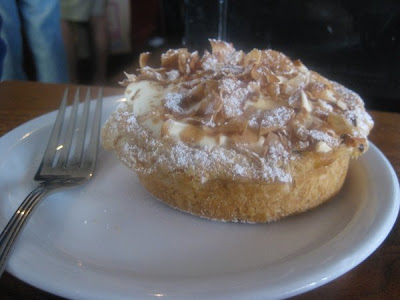 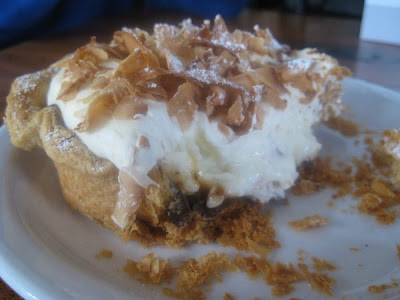 THIS WAS THE WINNER. The coconut tart with a delicate layer of chocolate and caramel on the crust. I would unholy things for another one of these RIGHT NOW.

Haha I just made scrambled eggs for myself and they came out brown. I am such a chef.
Email Post

The Renaissance said…
holy shit, yes, you are crazy...because El Farolito on 24th and Mission reigns motherfucking supreme. And did you do this whole post in 1 day? woah...
September 8, 2009 at 11:48 AM