So the other night, my cousin and I were out in Berkeley to get some late night BOBA action in. For one and a half Asian twenty-something year olds, guzzling boba at the local Quickly on a Friday night is the equivalent of doing body shots of Patron at a club for most other people. So we ended up at Sweethearts on Durant and got two boba milk teas for $3! For those of you who cannot add, that is a steal.

So right around the corner from Sweethearts is probably one of the best donut shops around, King Pin Donuts! Around 11 or 12, they have donuts fresh out the fryer cooling on racks by the window and it smells like the Pillsbury Doughboy's hotass fart. You cannot help but walk in, order nine dozen donuts, annihilate them, and do celebratory windmills til you break every bone in your body. Although this time I did not order nine dozen donuts, but I did order one cinnamon twist and did the windmill thing til the homeless people outside demanded I be removed. 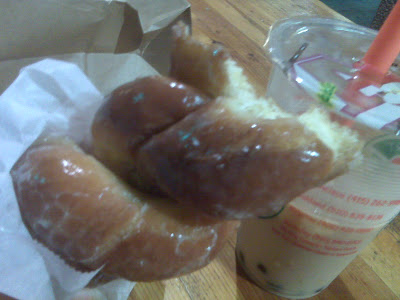 I only had my Blackberry on hand and no real camera so please excuse the wackness of these photos. But this is the boba and the elusive cinnamon twist. It was crunchy on the outside (in a fresh, good way) and warm and fluffy on the inside. I could not believe the gloriousness that was in my mouth... 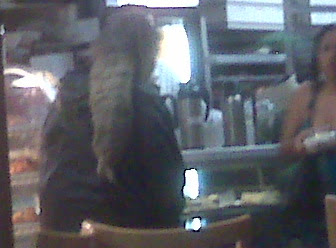 Believe it or not, this is NOT a badger tail. It is actually the world's largest and probably oldest dreadlock. After further investigation, I also found out that the woman donning this thing was in fact Whoopi Goldbergs crack baby.
Email Post

Caleb said…
I found your food blog going through a few links. Glad I ran into it. Didn’t know that the food blog/recipe community was so big online. I love your posts!

Susan said…
Hi – I like your blog, and wondered if you’d be interested in sharing your opinion on a new project I’m working on. Well, more than a project. We’ve recently started a new company in Silicon Valley (having started a few successful ones before) addressing the local space.

If you or anyone you know with expertise in (blog topic) would be interested in providing early feedback – we are definitely listening.

The site is www.placepop.com, The concept is that writing reviews on Yelp is too cumbersome for most people, and too limited in the # of cities it covers. But that if we can make sharing places – any place anywhere in the world – a lot easier, a lot more people could participate. And that would help us all discover more great places.

We’ve just released the site, it’s an experiment and – well, any opinion would be accepted (you can email me thoughts, or post them anonymously on the feedback link).

Thanks, and great blog.