Alcohol is a fickle substance that can lower your standards to the point where you do inexplicable things like driving under the influence or getting a hummer from a tranny. Everyone's had their "What the fuck was I thinking?" moments after doing one keg stand too many and I had the displeasure of experiencing one of these moments this past weekend.

So I was flying back up to the Bay this past weekend but ended up getting stuck at the Burbank airport for like 2 hours because my flight was delayed. My brother and I ended up just having a few beers at the bar inside the terminal and just hanging out there. We finally got onto a flight and I had worked up a good buzz by the time I had gotten onto the plane. At this point, my appetite was raging out of control and I had grown sick of the leftover Cuban food that I was toting around with me as a snacklet. I became deliriously desperate for something new to snack on and was on the verge of chewing my own flesh off of my arm. Finally, the stewardess handed me a small bag of peanuts and I tore that shit open like there was no tomorrow. I devoured every goddamn morsel and each morsel delivered more pleasure than the last. Typically, peanuts by themselves make me want to barf but for some reason, that shit tasted like prime rib to me. I think I annoyed the man to my left who probably caught a hot wind of peanut debris during my rendezvous with the peanut bag. I even tried to discretely photograph my peanut bag for blogging purposes, which I'm sure confused the man next to me even more. 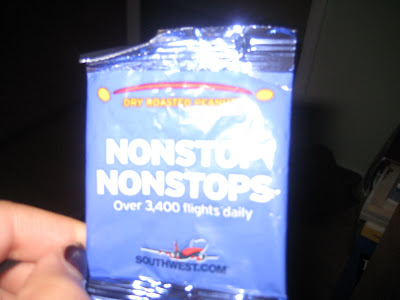 Now that I'm sober and looking back at this experience, I'm feeling really confused and slightly disgusted with myself. In my sober state, I really cannot comprehend my attraction to peanuts and why I found them to be so satisfying. They really do make me want to barf.
Email Post

Anonymous said…
I, too did the same thing a few weeks ago - same airline. I detest peanuts, but after being stuck in air traffic (for nine hours) - for what would of been a three hour car ride, I was cheap, and ready for anything!
June 4, 2008 at 4:01 PM