Eating My Way Through The Blues Trail: New Orleans

I've just come back from a week-long road trip through the South and am in desperate need of a vegetable and a pore cleansing face mask. I haven't encountered a vegetable that wasn't slow cooked in hamhock juice for a week and my face is very upset with me for using it as a canvas for grease splatter.

Our plan was to drive up The Blues Trail from New Orleans to Memphis, but we ran made a few pit stops and ran into a few hiccups along the way - but that's what happens when you hit the open road. This was my boyfriend and I's first time visiting the South, but based on all of the Food Channel, Travel Channel and Cooking Channel watching that we do, we felt like we were entering sacred grounds that we'd already traveled mentally via Guy Fieri's Camaro.

We arrived in New Orleans on a Saturday night and our first stop was Lüke in the French Quarter. They had glowing reviews on Yelp and it was less than a quarter of a mile from our hotel, so we figured we would slosh our way over there. 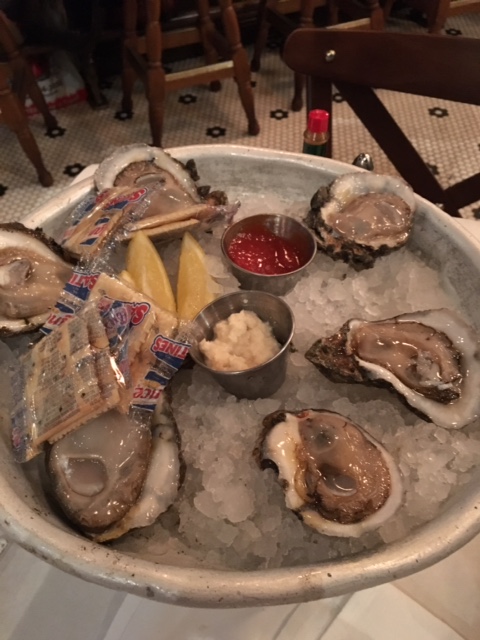 First off, the P&J oysters were some of the freshest tasting oysters in life. I'm not sure why they showered the platter with saltines, but I interpreted it as their way of saying "psst..stick these in your purse" and I was more than happy to oblige. 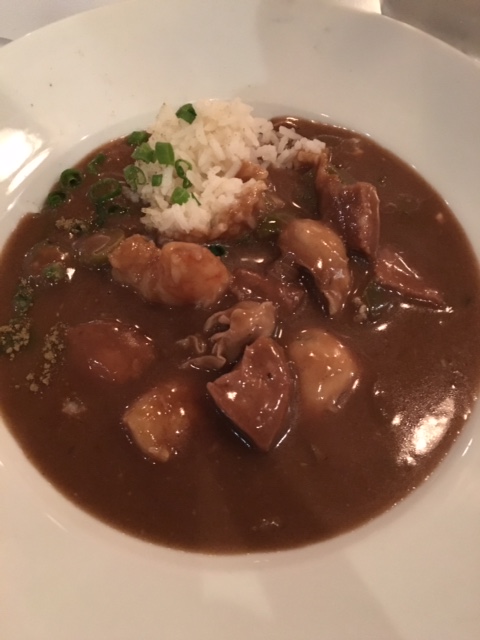 This may come as a shock to many of you, but I haven't had many encounters with gumbo. It was very exciting to finally have gumbo in New Orleans and this surely was the shit. 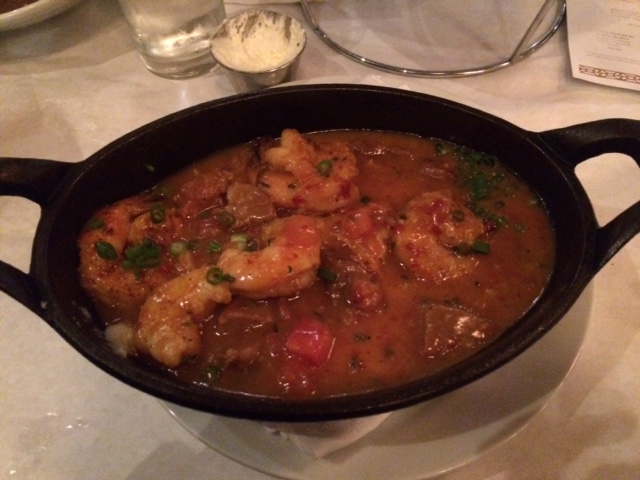 The Jumbo Louisiana Shrimp en Cocotte aka THE SHRIMP AND GRITS were hands down the best  I've ever had. They were roasted jalapeno cheese grits with andouille and green onion sausages. First off, gulf shrimp are far plumper, juicier and sweeter than any shrimp I've had out here and there was a blanket of cheese on the grits that made my eyes roll back in their sockets permanently.

You cannot go to New Orleans and not go to Bourbon Street. Yes, it's touristy and yes, all of your Uber drivers will advise you not to go there, but it is absolutely magical. And gross. But fuck it - you must go at least once in your life. It's as if the Bastille district in Paris knocked up Reno out of wedlock and Reno gave birth in a swamp. 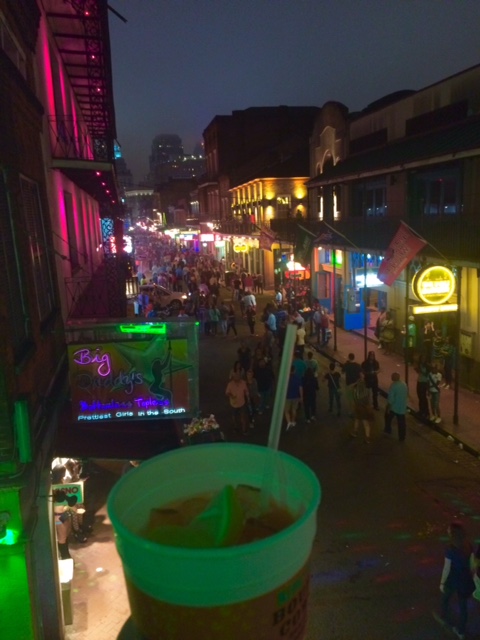 Here's me enjoying a breathtaking view of countless titty bars and miscreants who have sold their souls to Drew Brees, while sipping on a mysterious cocktail most likely made of moonshine and crocodile placenta. I'd never felt so drunk alive.

Our intentions were to find a nice jazz bar where we could just chill out and have a couple drinks. 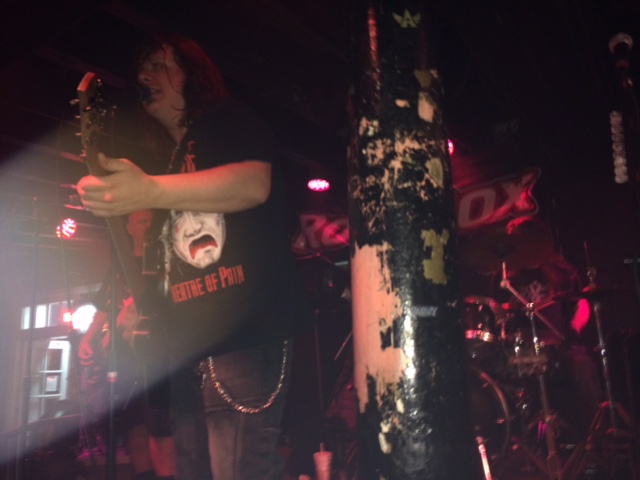 Instead, we found this Metallica cover band that shattered my brain into a million tiny pieces. I believe this is where we took test tube shots of Fireball and head banged all night. I didn't even know that I knew the words to "Enter Sandman", but apparently I do and almost lost my voice. 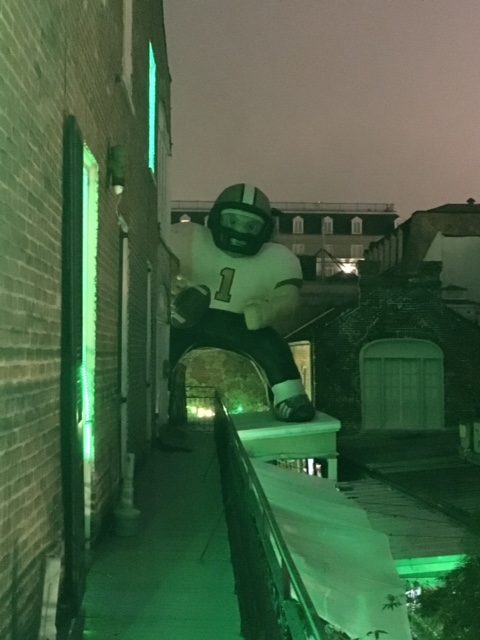 I almost fell off a balcony at some bar because this menacingly large Saints blow up doll startled the shit out of me. I'm assuming this blow up doll is the Grand Marshall of the Mardi Gras parade this year and not just an oddly placed, oversized inflatable gargoyle. 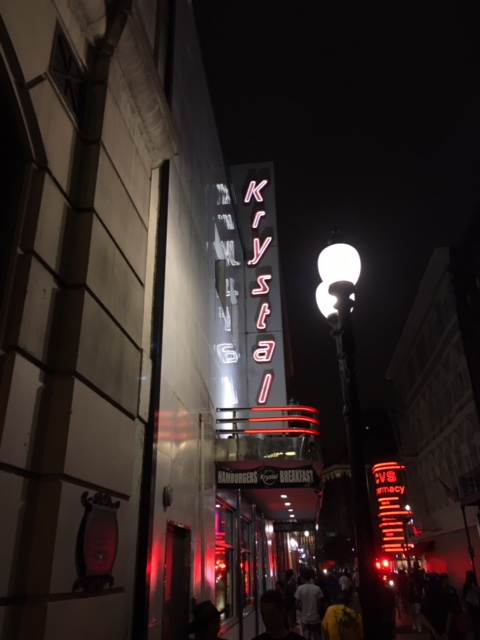 The most important building on Bourbon Street is this Krystal burger, which is essentially the White Castle of the South. I swore to myself that I would make it here one day and boy did I make it rain on them hoes. 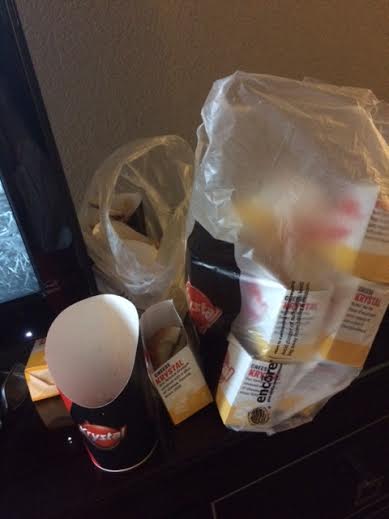 I woke up the next morning to find that I had ordered a family meal with a side of chicken wings? 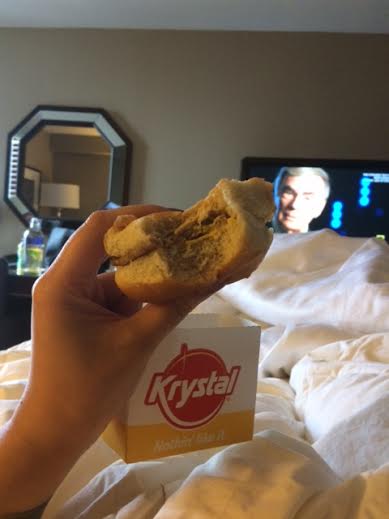 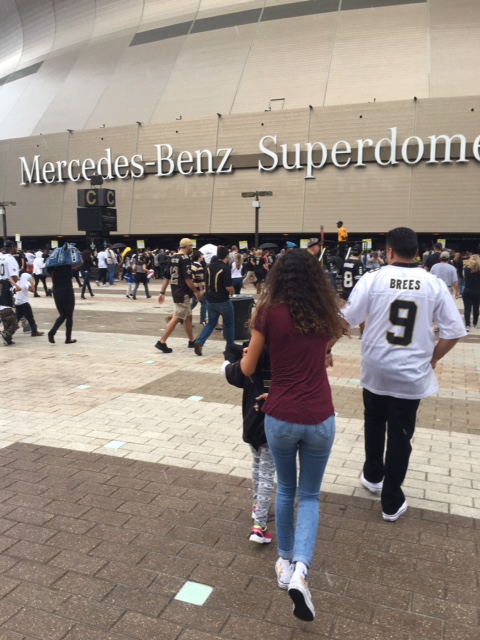 We miraculously made it to the legendary SUPERDOME to watch the Saints take on the Jaguars. I heard rumors of exotic snacks here and I just love anywhere I'm allowed to spontaneously yell in public. 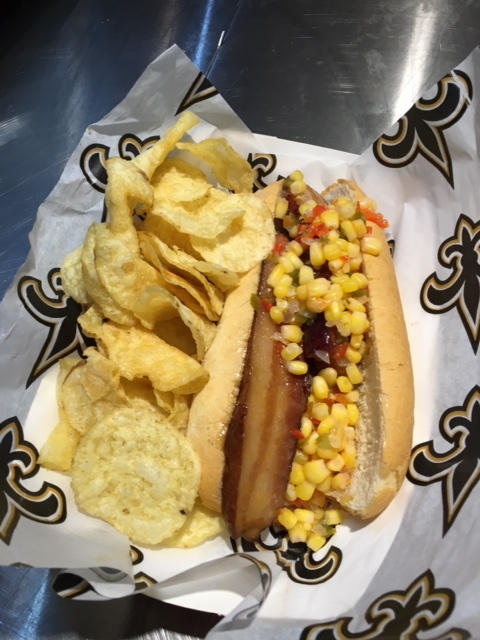 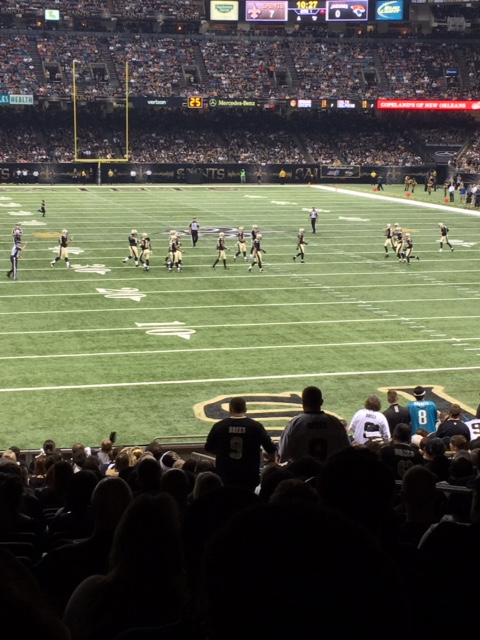 I generally don't give a rats ass about the Saints (please don't kill me), but I was definitely bandwagoning sitting in that crowd. The Saints fans are some of the liveliest and most spirited sports fans I've ever encountered. I don't think I've ever seen a crowd do the wave for that long and probably dislocated both of my shoulders participating in the wave for 45 minutes straight. 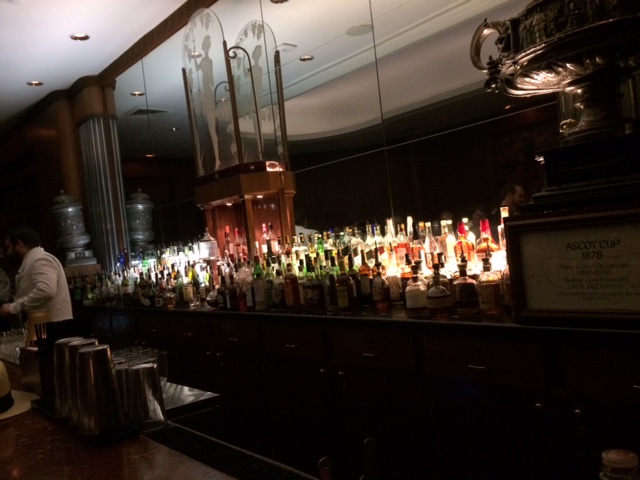 We went to the historical Sazerac Bar at The Roosevelt Hotel because I vaguely recalled seeing it on Best Bars in America once. 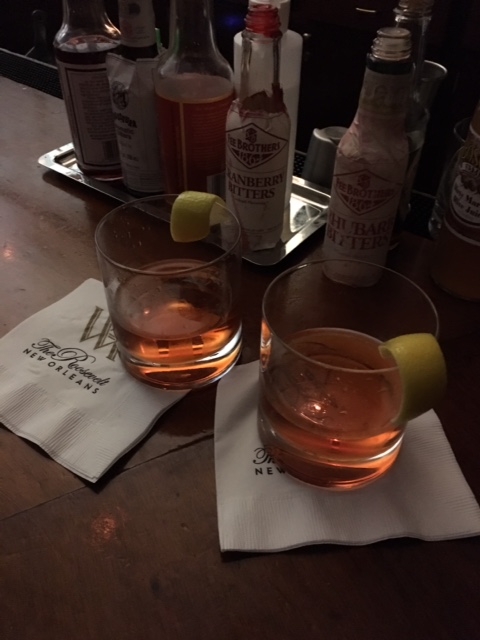 I mistakenly declared that this was the birthplace of the Sazerac to my boyfriend and have yet to correct myself - not sure I can burst his bubble. Aside from me being totally misinformed, these were damn good Sazeracs.

We needed some po'boys, so we headed to Killer Po'Boys located in the back of the Erin Rose bar off of Bourbon. 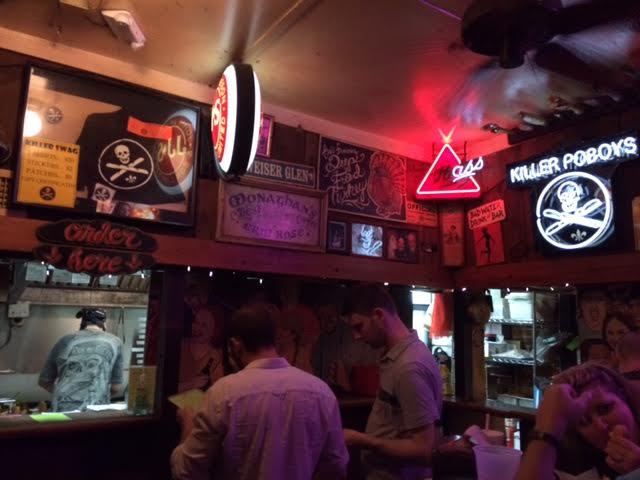 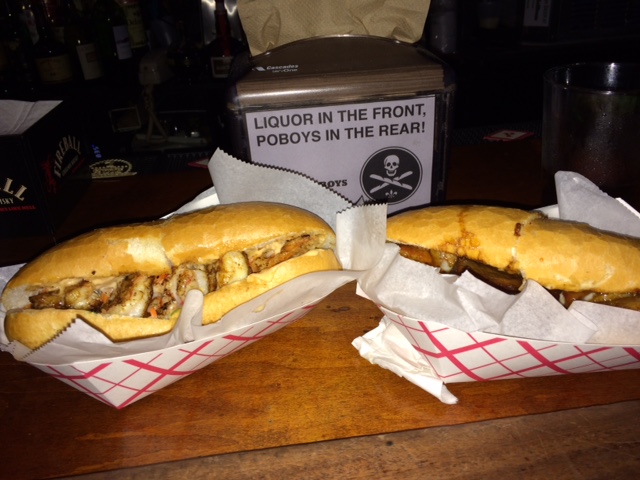 These were fuckin' ridiculous. The one on the left with the fat shrimps hanging out was clearly the shrimp po'boy and the one on the right is the pork belly po'boy. Yes, I had two in one day. I cannot stress how important and delicious the shrimps in this region are. AND LOOK AT THAT BREAD!!

After eating these, I could no longer look Bourbon street in the eye because I was sure that it was killing me, so we took the advice of the locals and went to Frenchman street. It is where people with self-respect and dignity go to listen to world class jazz bands. We only lasted so long here before someone in my party vomited. I took that as my cue to get some beignets by myself. 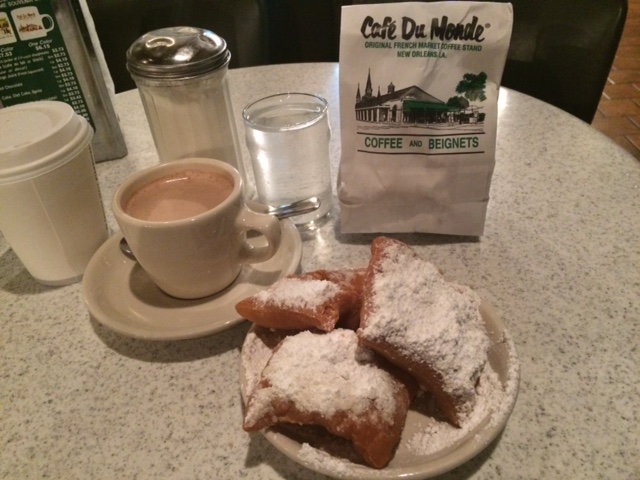 Visited the world famous Cafe Du Monde where I enjoyed stack of beignets topped with a mountain of sugar alongside a hot chocolate. Needless to say, I didn't sleep a wink that night because I consumed enough sugar to power a preschool.

The next day, my boyfriend was feeling under the weather so I bought him a bunch of liquids and Pepto Bismol and told him I was gonna pick up some fried chicken right quick. So I hopped in an Uber over to Treme to Willie Mae's Scotch House. 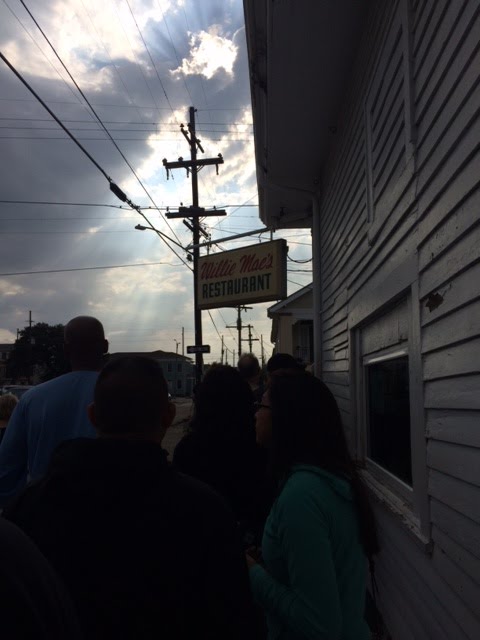 If you're gonna wait in line for an hour by yourself for fried chicken, DO IT HERE. 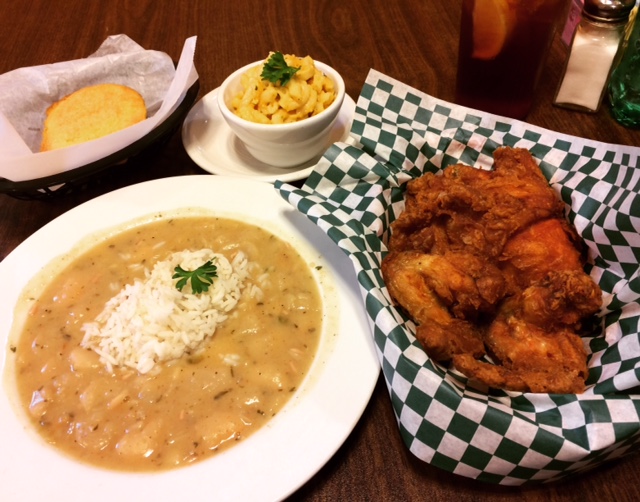 I was led to my table for one and ordered an order of "America's Best Fried Chicken", butter beans and rice, mac and cheese and corn bread. I was nervous with excitement to eat this and almost cried when they started playing Michael McDonald (my favorite singer) before I bit into this chicken. 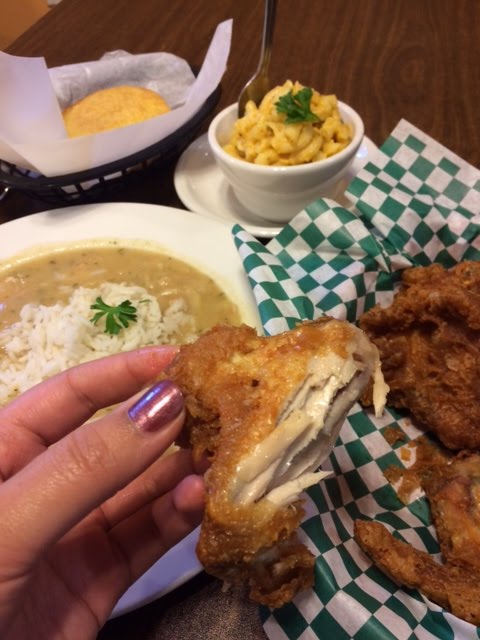 I have never seen chicken just fall off the bone. Like I literally peeled off the skin and it just popped out and rolled onto the table. It was miraculous. (Please excuse my hands - I realize they belong on a man and not a female.)

This meal commenced my journey through the Great Southern Fried Chicken Trail, which is what I renamed our trip because we ate that much fried chicken. I have to say Willie Mae's was my favorite based on juiciness and the balance of seasoning. And the sides were bomb as fuck too.

After a lengthy nap, we headed back out to Bourbon street because we clearly don't care about our physical or mental health.

Since I am obsessed with the book A Confederacy of Dunces, I couldn't help but accost a hot dog vendor for a frankfurter. The gentleman manning the cart bore no resemblance to Ignatius C. Reilly, but was kind enough to talk to us for a while and when I confessed my love for Ignatius he told me that there was an actual statue of him around the corner. 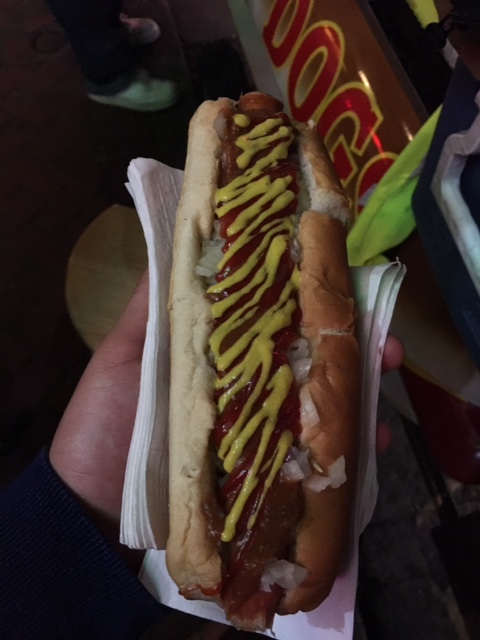 This really was a phenomenal chili dog. 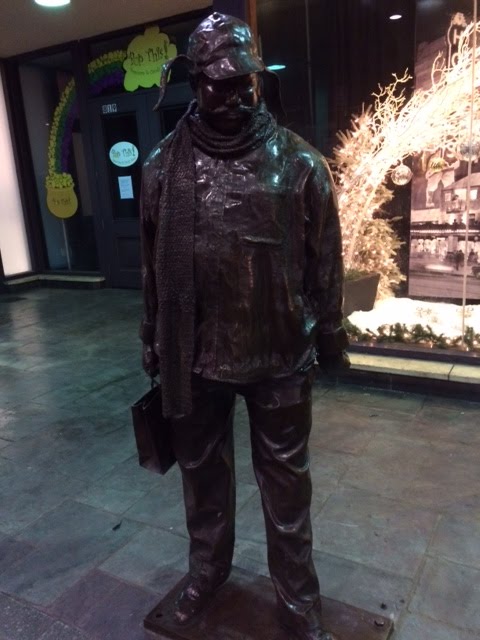 The Ignatius C. Reilly statue is much thinner than I imagined. I hope when people make a statue of me one day, they will have the decency to make me waif-like and sexy like they did with this statue.

And that was the end of my first encounter with New Orleans. Expect me back soon because there's no way in hell I'm done eating there and I don't believe I even put a dent in seeing all the sights.  Hopefully on my next visit I can pry my ignant ass away from Bourbon Street and experience more of the city.

Stay tuned for my next post cause I'll be covering the next few stops on our road trip through the Blues Trail/Fried Chicken Trail.