This is why you're fat/NASTY SOUP ALERT!!

So everyone and their moms have been sending me the link to, http://www.thisiswhyyourefat.com. Its been real interesting because for one, I literally saw all of my wildest dreams come true before my eyes and second, I think around 15 people inadvertently (or intentionally) called me fat in one week. It really is a prolific blog, full of depth and gives insight into the inspiring minds of America's finest culinary engineers. If you haven't already checked it out, I suggest you do because it'll give you an opportunity to immerse yourself in some culture. You probably need it if you're reading my bullshit.

Anyhow, I realized that I've had some mild "This is why you're fat," moments over the past few months. Most recently, being today... 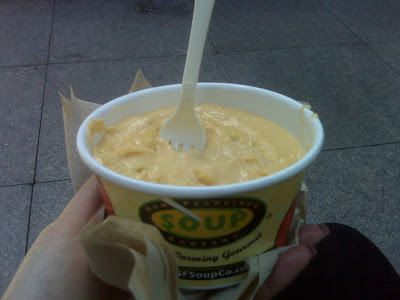 So on my lunch break, I wanted soup so I hit up The San Francisco Soup Company. Their tomato bisque is alright, so I was going to have that...until I saw macaroni and cheese on the menu. Well, turns out it wasn't actual macaroni and cheese, it was soup (no shit). 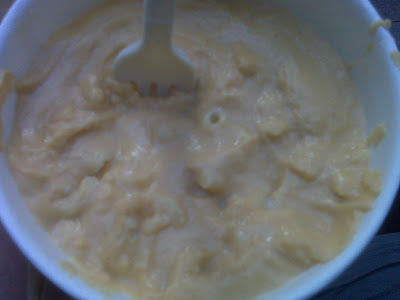 Its like nacho cheese soup, only thicker and with about 5 macaroni noodles lost in there somewhere. It was so fuckin gross, I couldn't even look at it. I took this photo with my blackberry, so imagine if I had taken it with an actual camera...people would be barfing all over their screens. Honestly, if this turns you on in any sort of way, you are sick and Chris Hansen should probably have a visit with you. Don't even try to run, the cops are in your front yard.

My other moment was brought on by none other than my own father. Filipinos have a dish called "bistek," which consists of beef, onions, and sometimes potatoes that are sauteed together with soy sauce and garlic. I came home one day and found that my dad made this... 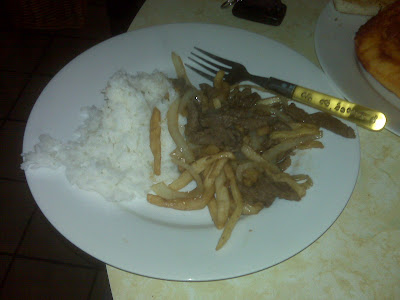 It's bistek with MCDONALDS FRIES in it. I knew they were McDonald's fries because I saw McDonald's bags full of fries sitting on our kitchen counter. My father and I then had the following conversation:
Me: WHY THE HELL DID YOU BUY MCDONALDS? (He has high cholesterol, heart problems etc.)
Dad: I'm making something with the fries. You'll see...
Me: Then why the hell are there two cheeseburgers in here??
Dad: Because they told me I have to buy them so that the fries are cheaper. (He did not buy meals, there were no drinks. Clearly lying.)
Me: Wow, I've never heard of that deal before. What McDonald's was this?
*Dad walks away*

An hour later, he tells me lunch is ready and I come out to McObese-stek. Naturally, I yelled at him and told him to never make it again. But I'm not gonna lie, SHIT WAS GOOD. The man is a bit of genius and clearly, the apple doesn't fall very far from the tree. I know I sound like a P.O. but someones gotta do it or else he'd be snacking on bricks of spam lathered in mayonnaise.
Email Post