I've run out of excuses for not blogging and frankly, I'm sick of people begging me to write on here. It's getting pathetic, so I thought that I'd finally just give the people what they want. So here I am, in all my elephantine glory...DRINK IT IN, SLUTS. (I have mocha almond fudge ice cream dripping down my chin as I type this with my green beer stained fingers.)

So, while I was on sabbatical from the blogging world, I moved from Los Angeles to San Francisco and then I went to the Philippines for roughly 6 weeks. Thus, I have become alarmingly overweight due to:

1) My new roommates like to cook a lot and share their food with me for free. They even let me come to Costco with them and buy me fun things like Dino Nuggets and Spinach Dip. These people are also more commonly referred to as my parents, but in social settings they are my roommates.

2) There are four food groups in the Philippines: meats, rice, condiments, and fried things. Apparently, not very many people believe in the magic of vegetables or at least that was my asses impression. I'm not gonna front though, I had the most glorious time eating amazing Filipino food everyday. So allow me to share some sexyass photos with you... 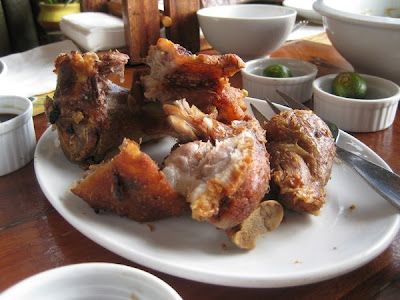 I believe this is Lechon Kawali, which is pan roasted pork. Its actually only about 10% pork meat, 20% skin, and 70% fat. Which is ironic because those are the exact proportions of what my body is comprised of. 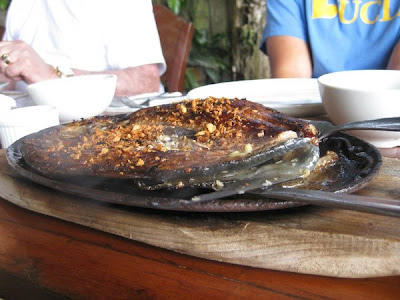 BANGUS aka Milk Fish is the most popular fish served in the Philippines and this particular one is a sizzling bangus. What was also sizzling was my crotch. 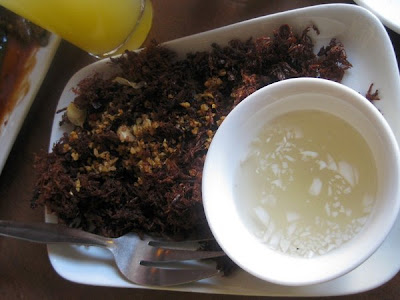 ADOBO SHREDS! So adobo is anything cooked in a garlic/vinegar/soy sauce and THIS is probably pork adobo that was fried and shredded, served alongside some vinegar. Perhaps you would have to be Filipino to be aroused by this, but I am most definitely having trouble containing myself right now. Like, to the point where I can't stand because I'm wearing basketball shorts. 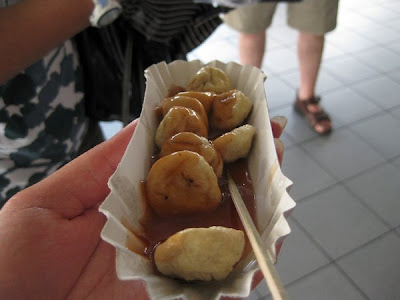 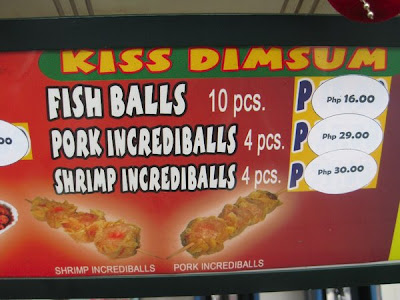 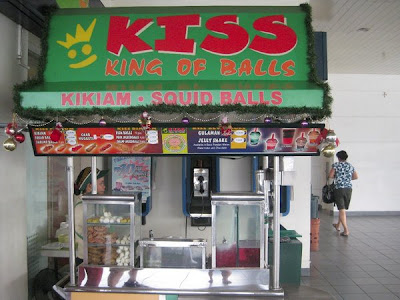 If there is one thing that I love more than Caucasian dancing, it would have to be fobby signage. And of all the fobby signage that I've come across in my lifetime, I would have to say that the KING OF BALLS cart at this rest stop in the Philippines really takes the cake. They have INCREDIBALLS on the menu for christ sakes. I think the chick at the cart wanted to kick my ass because I took about 1 billion photos from every imagineable angle and this was after I spent an hour yelling/crying/laughing/convulsing in front of the cart. The fishballs were decadent little doughy fried balls of whats supposed to be fish and I MURDERED those shits without even chewing. 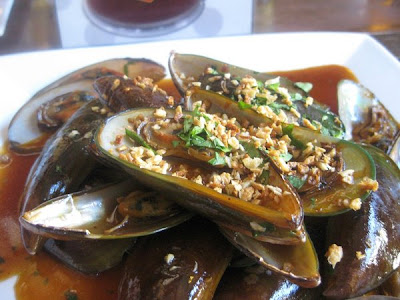 A platter of cunt mussels for your viewing pleasure. 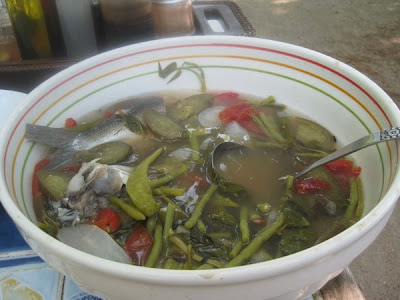 SINIGANG! I was served this practically everyday but never really got sick of it. Its a tangy tamarind based soup with various nom noms thrown in like shrimp, fish, or pork with veggies. I fucks wid it. 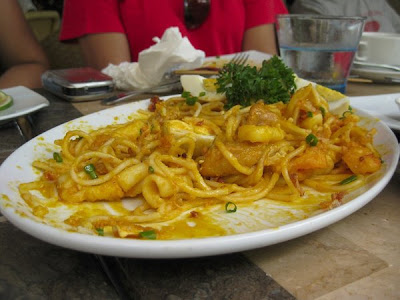 PANCIT MALABON or PALABOK. I think they're the same thing? All I know is that its delicious and sexy and orange. So it doesn't matter that I don't EXACTLY what it is...ain't like it got me pregnant, feel me? 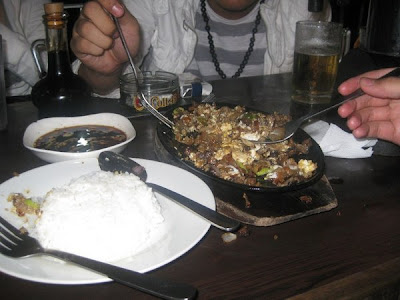 SISIG!! This is a hot, sizzling platter of PIG FACE. Again, doesn't sound very attractive but its astonishingly tasty, especially when you're drunk. The best part about going out in the Philippines is that they serve food at all hours even at bars and shit. So every time I drank, it was either pass out on a plate of this or calamari. 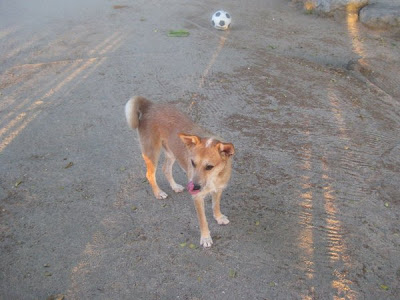 This is Charles, I adobo'd his ass. JUST KIDDING...I'm totally kidding. Please don't kill me. 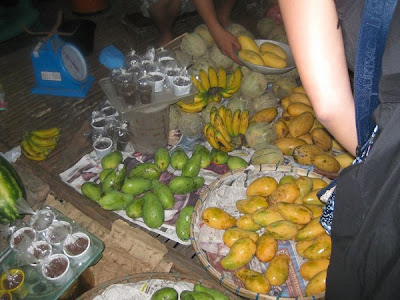 The sexy golden nuggets on the bottom right are Philippine mangoes, which are superior to any other type of mango in every conceivable way. They are sweet and tender, much like my ass cheeks in the springtime. 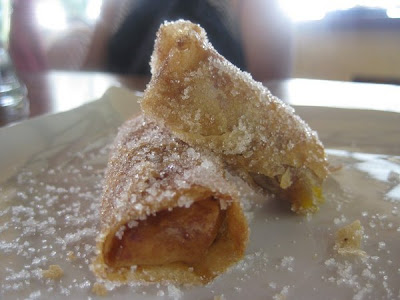 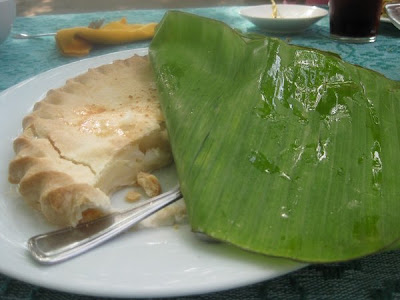 DESSERTS! The first is a boner inducing photo of TURON aka a banana deep fried in a crispy wrapper sort of thing. SO BOMB. The second photo is of Buko Pie or coconut pie...look it at, coyly staring you down from beneath a banana leaf. 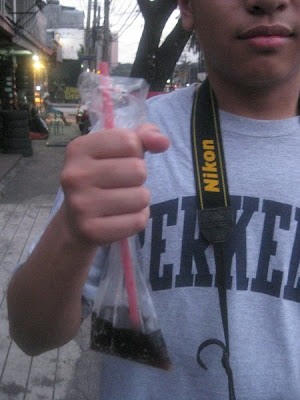 So my brother went to buy a soda from a corner store in Manila and when he came back, he came back with this. It's coke in a plastic bag with a straw, and we've been having trouble getting him to drink out of cups, glasses, bottles, etc. ever since. 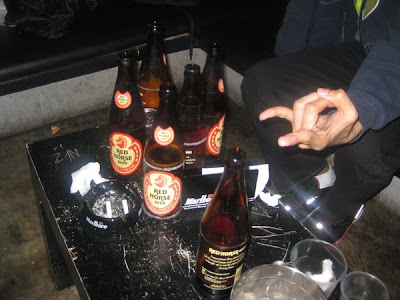 Now this here is called RED HORSE, its probably the most significant and exquisite part of Philippine culture. This is the San Miguel companies top of the line beer and is known for separating the weak from the abnormally strong. The bottle doesn't reveal the alcohol content, it just says "extra strong." I looked it up and it says the ones sold in the U.S. are around 7% alcohol, which is supposedly less than the ones sold in the Philippines. My family called me "jologs" for loving this beer. "Jologs" is Filipino slang for "passe" or "ghetto." Apparently, girls aren't supposed to drink Red Horse?

I'll leave you all with some photographs that pretty much sum up the essence of the Philippines... 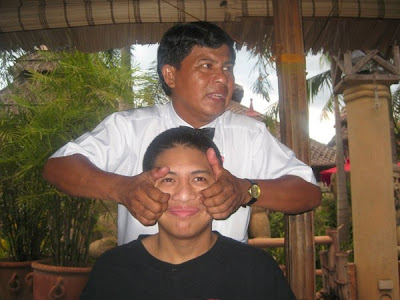 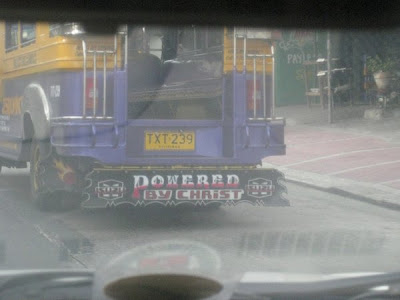