"Quiero tener relaciones sexuales con Cuba" means "I want to have sexual relations with Cuba" according to my friends at FreeTranslation.com. This is true, I do want to have sexual relations with Cuba or their cuisine at least. Cuba has so many great things to offer such as our national pride and joy, Guantanamo Bay, our buddy Fidel Castro, world class cigars, an assortment of sexy baseball players whose names I don't know, and deliciously prepared meats. Also, I've been consuming a lot of uninspiring food lately and the only meals that have moved me lately have been from Cuban places. With that being said, I AIN'T MAD AT CUBA.

The first spot that I've discovered is a place in Silverlake called El Cochinito located on Sunset Blvd. It's located in a rather unattractive plaza and its exterior isn't the most inviting or impressive but ya know what, that don't confront me none. It has a real mom and pop type of atmosphere with its minimal and modest set up and its delightfully foreign employees. I was also very pleased with the fact that it wasn't infested with hipsters unlike most of the food establishments in the Silverlake area. I assume its because those retarded vegan gringos greatest fears are eating meat and getting fat. Anyhow, that's another issue that I'll reserve for a less joyous entry...SO, El Cochinito is my new favorite place to eat when I'm at work because: 1) ROAST PORK, 2) PLATANOS, and 3) I can get my eyebrows done at the place next door while I wait for my food. The menu features traditional Cuban fare such as Lechon Asado, Bistek Salteado, Cubano Sandwiches, and bombass CHICKEN thats served with excellent sides such as yucca, plantains, tostones, and black beans & rice. The portions are of epic proportions and the prices are pretty reasonable for the amount of food that they give you. SO ON WITH THE PORN... 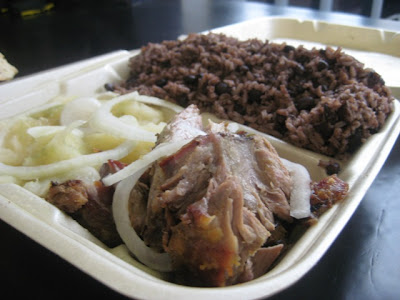 This is the LECHON ASADO aka ROAST PORK...I love swine prepared in just about any form but nothing gets me hurtin' fo' a squirtin' faster than that roasted pork. The skin on the roast pork makes my loins rage in the most violent manner imaginable...I just wanna cover my body in it Silence of the Lambs style. Anyhow, it came with black beans, rice, onions, and a hot, arousing pile of yucca. 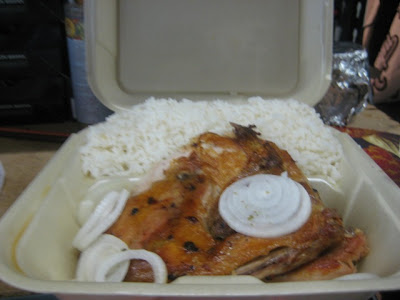 This is the POLLO ASADO aka ROASTED CHICKEN. It was pretty damn good, but I'm not gonna lie...the garlic chicken from Versailles is better. 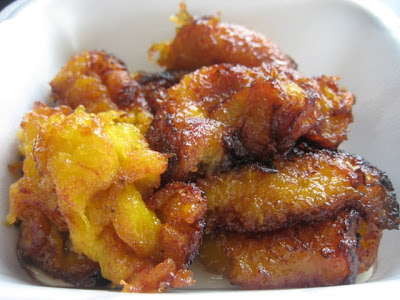 PLATANOS or plantains as gringos such as myself like to call them. I could eat these all day everyday with anything...chicken nuggets, meatloaf, Fruity Pebbles, chow fun, collard greens...ANY DAMN THaNG! You don't even wanna know all the illegal things I'd do with plantains. 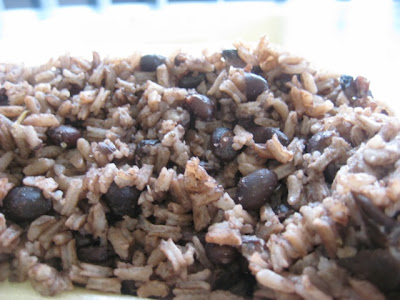 I opted to have my rice and beans mixed together because it saves me the trouble of trying to furiously stuff everything in my mouth all at once. Efficiency is very important when you're eating a meal with so many different components. 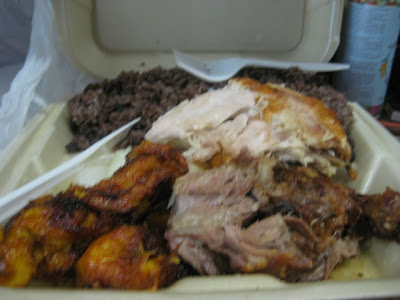 The end product: beans & rice, chicken, pork, yucca, and plantains together on one plate harmoniously laid side by side, ready for a violently ruthless execution. I did it because I loved them.

In conclusion, El Cochinito is super OFFICIAL and I'd definitely smash that ho to pieces on a regular basis.

The next spot is a place very near and dear to my heart called Porto's. Porto's Bakery is a legendary institution that people from all over Southern California flock to for very good reason. They have approximately one billion different pastries to choose from, all of which are stellar in their own right and deserve to be preserved for future civilizations to sample, praise, and worship. You think that I am being dramatic and are probably doubting my palate at this point, but you are wrong because I don't joke when it comes to food and neither does my sophisticated palate.

SO...Porto's not only has amazing pastries, cakes, cookies, and all that sugary jazz but they also have Cuban sandwiches such as the Medianoche, Lechon, and Bistec as well as meat pies and my personal favorite, the potato ball. Since everything is so damn good, this place is always extremely crowded, so you should plan on spending at least 10 minutes waiting in line behind the most anxious looking crowd of people you will ever see in your life. This place is only about 8 or 9 blocks from my place but I don't come here as often as I'd like because the experience tends to aggravate me and gives me anxiety because theres so many people and so much to choose from. I usually give myself a hernia standing in line, trying to not press my fat, greasy face against the display cases. 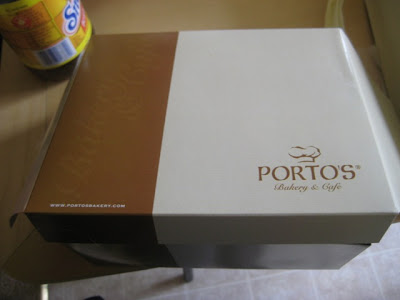 Once you open one of these boxes, you will automatically gain 15 lbs just looking at whatevers in it. According to my calculations... 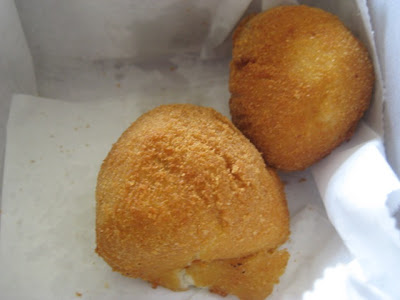 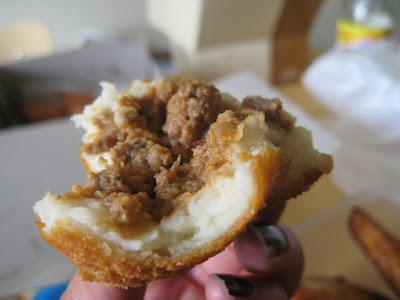 POTATO BALLS! The first time I ate one of these, I said grace and promised Jesus all sorts of things that I didn't mean to promise. Its basically a fried ball of mashed potatoes filled with seasoned ground beef. I would gladly house these balls in my mouth any day. 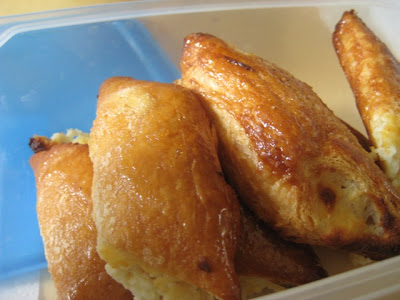 These are the infamous CHEESE ROLLS. Layers of glazed, flaky pastry filled with a thin, sweet layer of cream cheese filling. It is not uncommon to receive a box of these as gifts because people fiend for these suckers like nothing I've seen before...except for crack. Suspect? Highly.

So heres a list of shit from Porto's that you MUST try in your lifetime or else your entire life will have been a complete waste.

So yes, once again you're welcome for the valuable life advice.
Email Post

Deborah Dowd said…
I have to say I love your blog!Fatasses in LA clearly have it better than dieters here in Hampton Roads!Keep on rockin'!
August 9, 2008 at 3:45 PM

Anonymous said…
omg I love, love, love Portos cheese rolls. I'm from NY and every time I visit LA, I come home with a couple of boxes of Portos. mMmmmm!
November 8, 2008 at 12:42 PM