One of my favorite people in the world, Vicki recently had her bachelorette party in Cabo San Lucas and I had the pleasure of attending this magical Mexican rager. I am still trying to figure out a way to regenerate all of the brain cells I lost that weekend, but her wedding is coming up soon and I will likely lose them again anyways. SUCH IS RIFE.

Upon being released from customs, I was greeted by a tribe of sexy ladies who were freely swigging from a bottle of Jameson next to the baggage claim at the airport. As fate would have it, these happened to be the same ladies I would be bacheloretting with for the weekend and my excitement/fear for everyone's safety was at a level ORANGE. 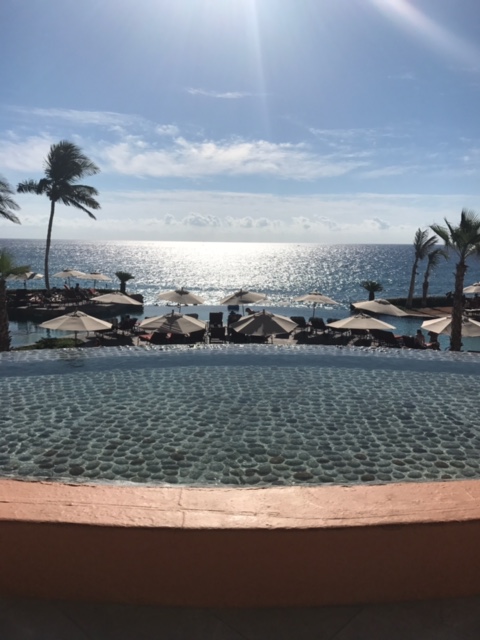 We stayed at the Sheraton Grand Los Cabos Hacienda del Mar and it was NICE AS FUCK. I jacked a bunch of these photos from the weekend shared file because all of mine were blurry photos of the inside of my purse. 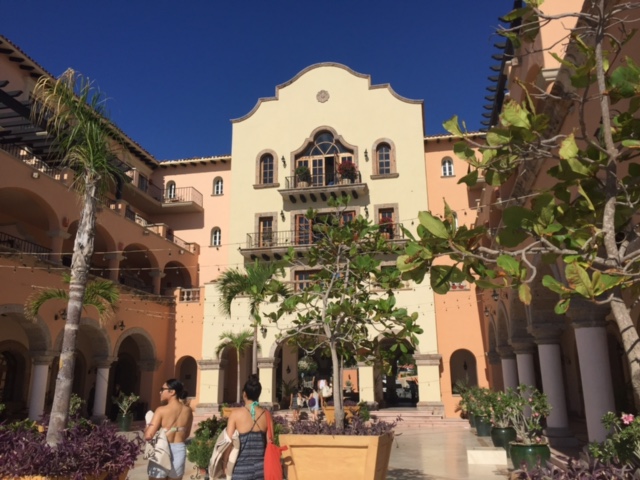 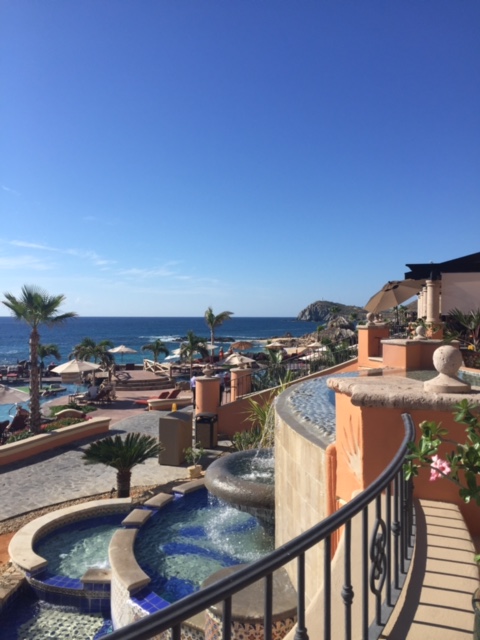 CAN YOU BELIEVE THEY LET ME IN HERE!? That's the beauty of traveling within a large group, there's less of a chance that people will notice how ratch you are. If I were to walk up in there dolo, they would have been like "KICK ROCKS, DUSTY HOBO." 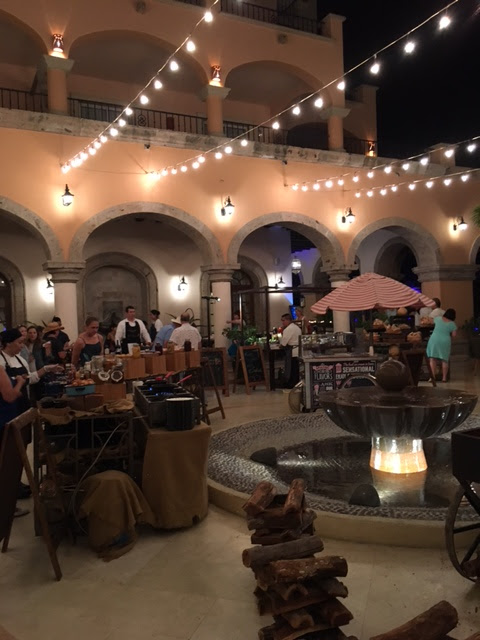 For dinner, they had this gorgeous buffet going on in the courtyard of the resort and we went all the way in. There was a seafood station where they grilled squidlings and such on a massive hot comal. There was also an ice cream cart that we gutted and it was amazing. 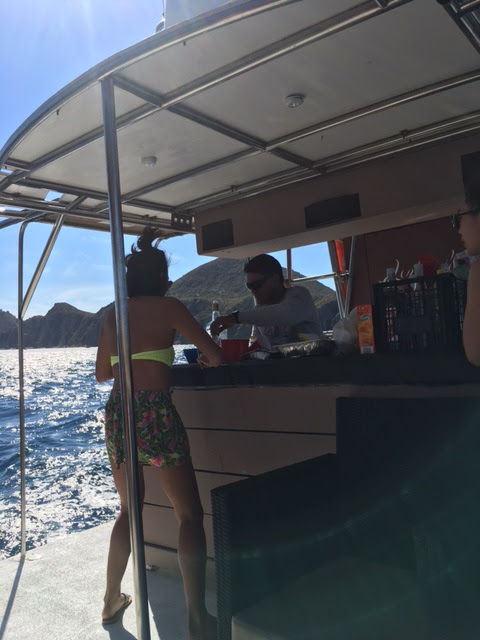 The next day, we rode this lovely boat out to sea and it came equipped with a bar, a captain and a skipper (both of which assumed the bartender role). Now THAT is what I call service. 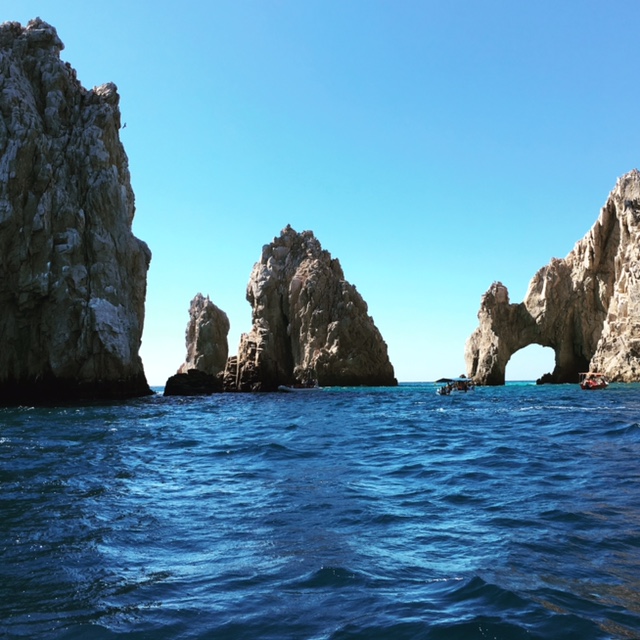 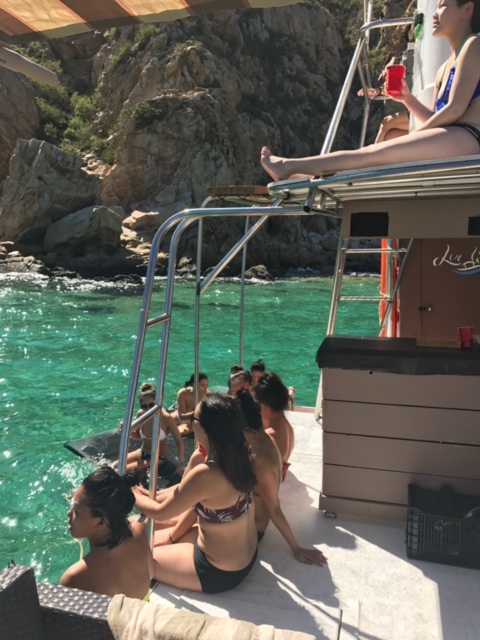 This is us not giving a fuck. 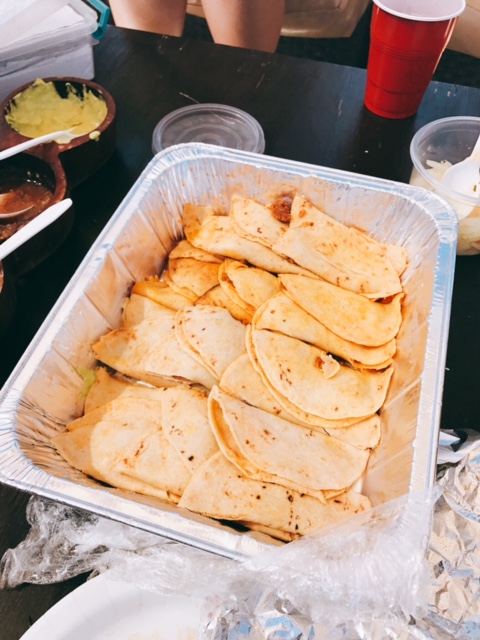 The highlight of the boat ride was when the skipper pulled out this gorgeous tray of homemade tacos filled with potatoes and pork (I think). My mouth had never met a realer tortilla... 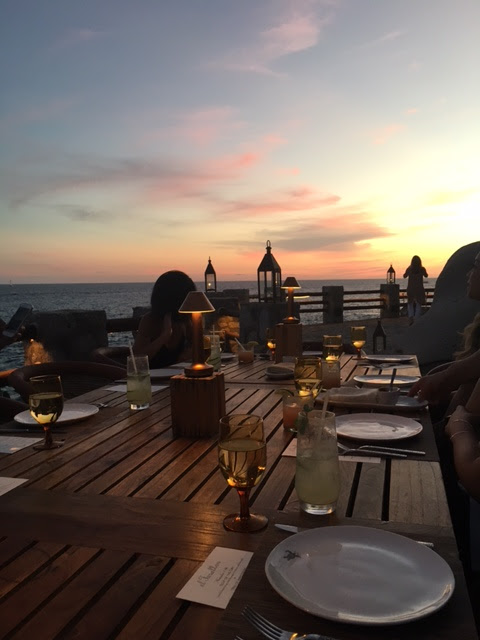 For dinner, we headed to this outdoor cliffside restaurant called El Farallon located inside The Resort at Pedregal. This twelve woman dinner date was easily the most romantic date I've ever been on. 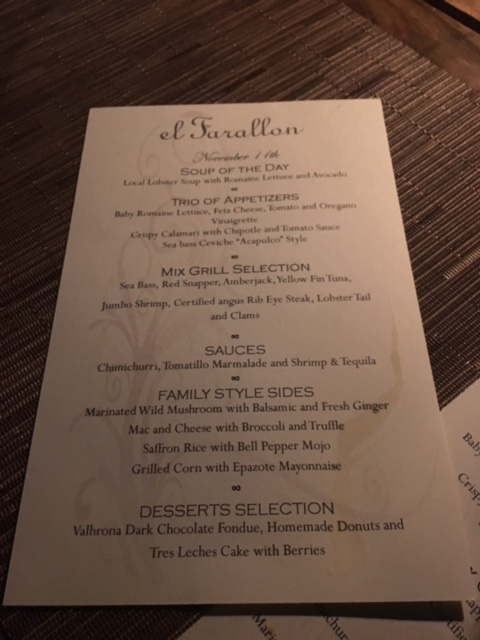 The menu was less of a menu to make selections from and more of a statement that said, "YOU ARE GOING TO EAT EVERYTHING ON THIS PAGE WHETHER YOU LIKE IT OR NOT!" To which I responded, "THAT DON'T CONFRONT ME NONE." 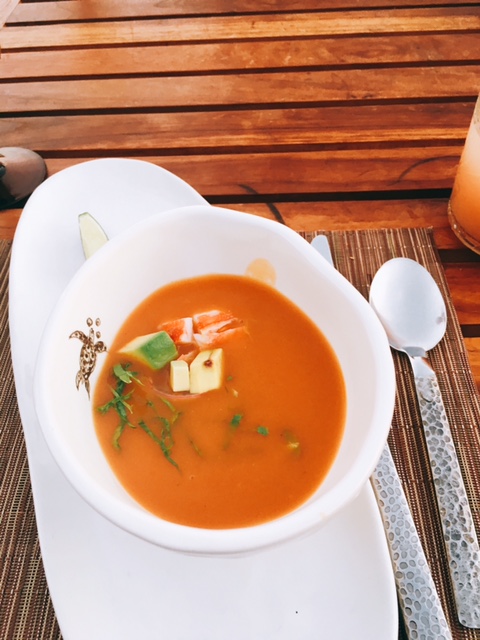 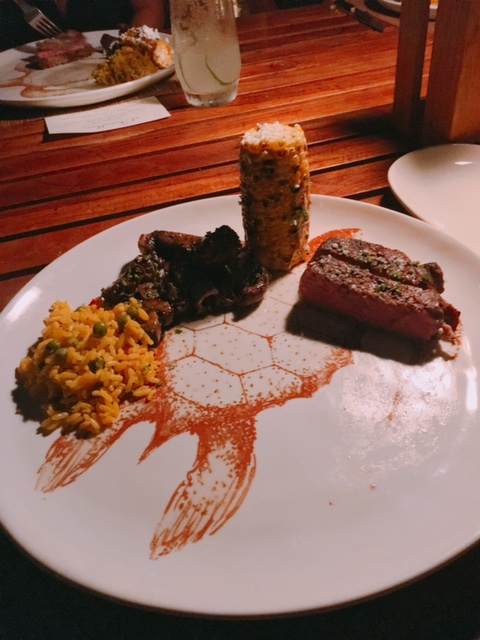 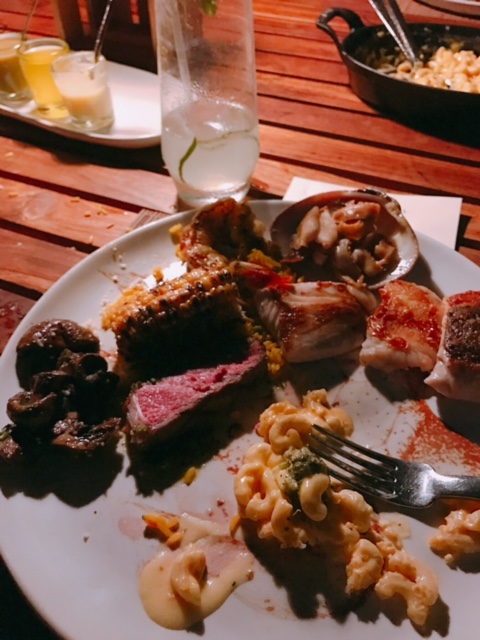 I was honestly too busy panting and moaning to take proper photos after the pozole because the waiters tirelessly served us course after course of straight panty droppers for at least two hours, so I had to steal these shots from the shared file. Again, being showered with ribeye, crustaceans and truffle mac for hours has been the highlight of my love life thus far.

We gathered the strength to hit up the clubs and bars in the downtown area with the help of several gallons of tequila and probably Jameson. I am not mad at the nightlife in Cabo. After three nights of steady raging in the downtown area, Vicki was unanimously elected as the new mayor of Cabo and she didn't even run for office. Magical things happen when you Danza Kuduro so hard. 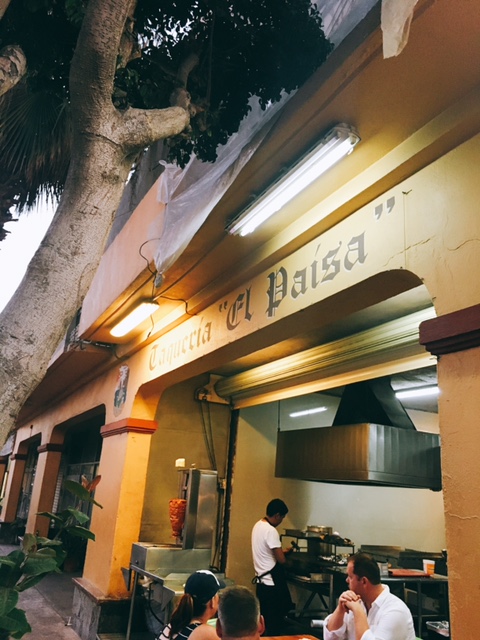 We drunkenly stumbled into this place after a night out and returned like three more times throughout the trip because the TACOS ARE STRAIGHT FIRE. 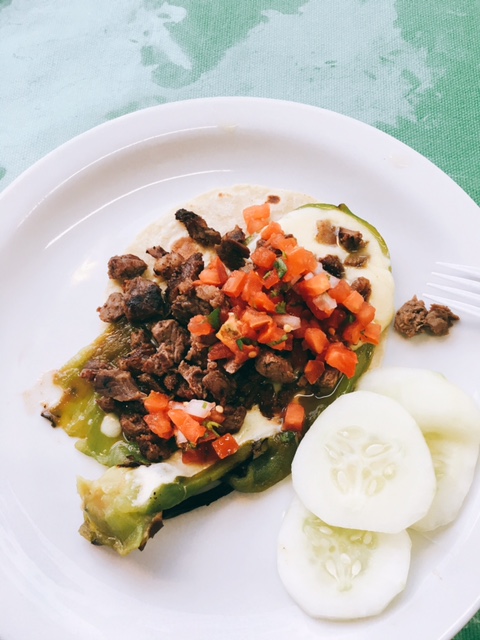 If someone had told me that this is what a taco in Mexico looks like, I would have moved there when I learned to walk. It is a fresh handmade tortilla with a grilled poblano topped with melted cheese and asada SITTING ON ITS FACE. 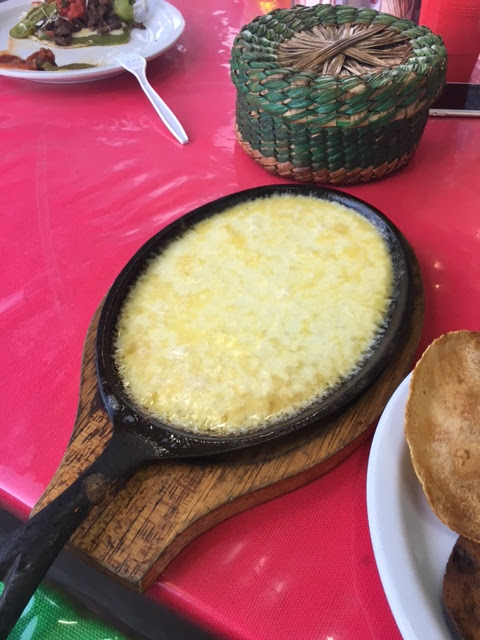 The queso fundido was outta control. I love this for so many reasons and not just because it's a skillet of melted cheese. I eat lots of things because there is melted cheese involved and this just eliminates all the bullshit. This dish says, "CUT THE SHIT AND LET THE CHEESE BE INDEPENDENT. CAUSE SHE CAN DO BAD ALL BY HERSELF." Go 'head, girl.

Copped this chili dusted mango crafted into a rose at the beach. I attacked it pretty ferociously with my teeth, which left a curtain of mango strings hanging from them. Soooo elegant. 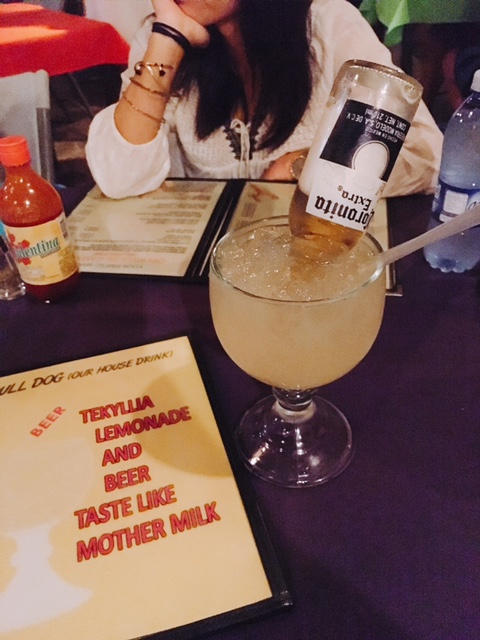 On our last night, we went to Maro's Shrimp House and it is pretty much like Hooters if you were to replace the waitresses with older Mexican men. It was an interactive experience where our waiter did a lot of gyrating, yelling and basically waterboarded us with liquor. This is their signature drink, the Bull Dog a.k.a. a bigass margarita garnished with an overturned bottle of Corona. It taste like mother milk. 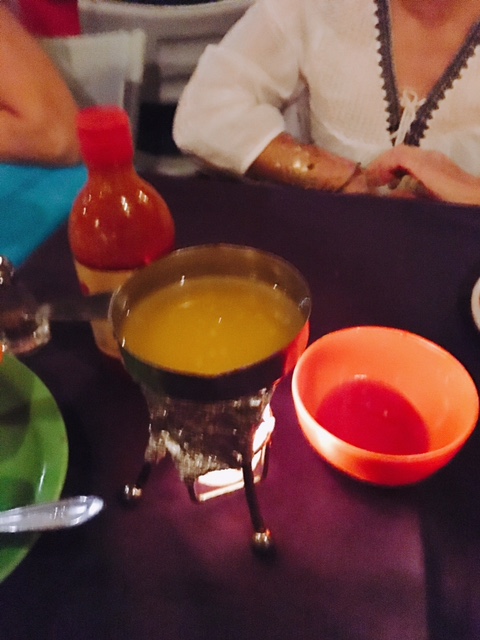 A tiny chalice filled with melted butter is always a good indication that something amazing is about to go down. 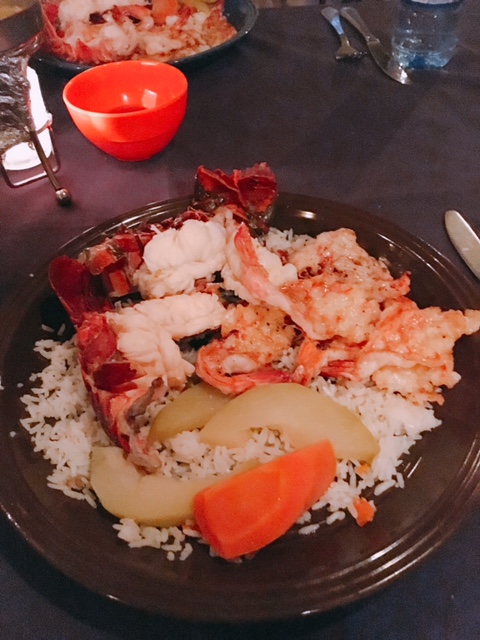 This was so bomb. A big plate of freshass grilled shrimp and a whole lobster tail on rice and veggies. I SHALL RETURN FOR YOU ONE DAY.

Cabo was so dope and the bridal party did an amazing job planning this trip. I don't think we ate one bad thing and I probably experienced a total of five minutes of sobriety in four days, which is exactly how a bachelorette party should be.