How To Survive Shake Shack in LA + Amboy

I have been trying to go to Shake Shack for years. Granted, I put in very minimal effort into actually going, but many close and failed encounters left me feeling desperate and defeated. I once tried to visit the location under the Brooklyn Bridge, but it was still under construction. I tried on at least three separate occasions to make it to the one at JFK, but who the hell gets to their terminal early enough to eat a meal before boarding?  I once went to Miami for 24 hours and asked a car full of friends, "Hey, don't they have a Shake Shack here?" and everyone ignored my question.

FAIL, FAIL, FAIL. Such is life.

So when I found out they were opening their first California location in West Hollywood, I was like "maybe". They opened right on Santa Monica and La Cienega, which is one of the busiest intersections in the Western Hemisphere and the idea of trying to find parking anywhere near there made me consider waiting until they open a location within 5 miles of my house, which will happen approximately never. However, West Hollywood is a 15 minute drive from my office, so I had zero excuses to not go after work, which is precisely what I did. DO YOU SEE WHAT KIND OF MINDFUCKERY PEOPLE HAVE TO DEAL WITH IN ORDER TO GET A NEW AND EXOTIC BURGER IN THESE PARTS!?

My apologies, this is not an indictment against driving/parking in LA - it is a celebration of burgers and dairy treats, so I will act as such. 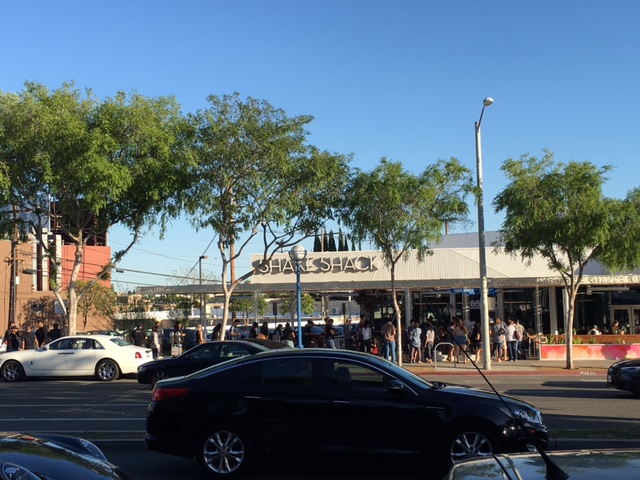 I parked, saw this line and screamed "WHAT THE FUCK!?" from across the street. This was the line on a Thursday at 6pm. When I walked out nearly an hour and a half later, the length of the line had doubled. Bring some sunscreen, a snack or some psychedelic drugs if you plan on waiting in this line. 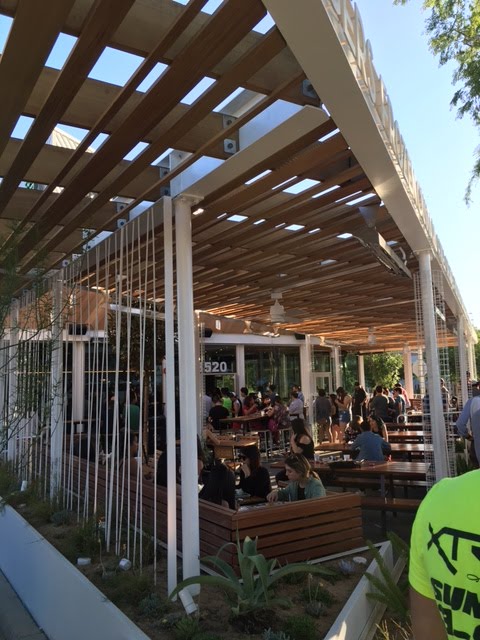 I got in line and started working on my eventual sunburn until my friend, Mona arrived. I appreciated the outdoor patio, because it meant I could indiscreetly eye-fuck other peoples meals while waiting in line, which is something that I find myself doing far too often and have come to accept it as a part of life. 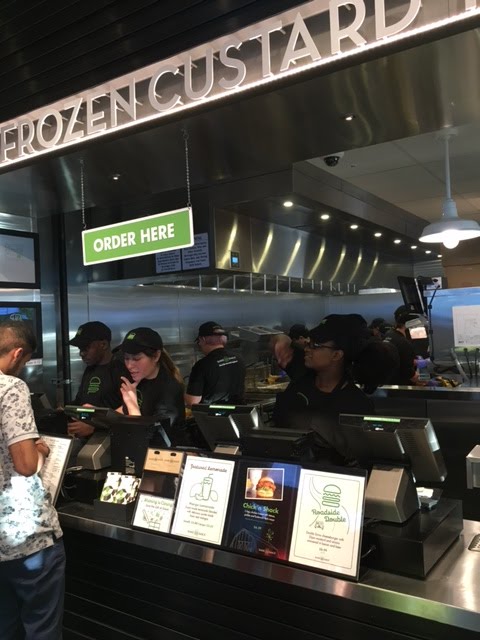 After waiting 30 minutes or so in line, I finally made it inside and ordered half of the menu because that is what any sane person would do after waiting that long in line. 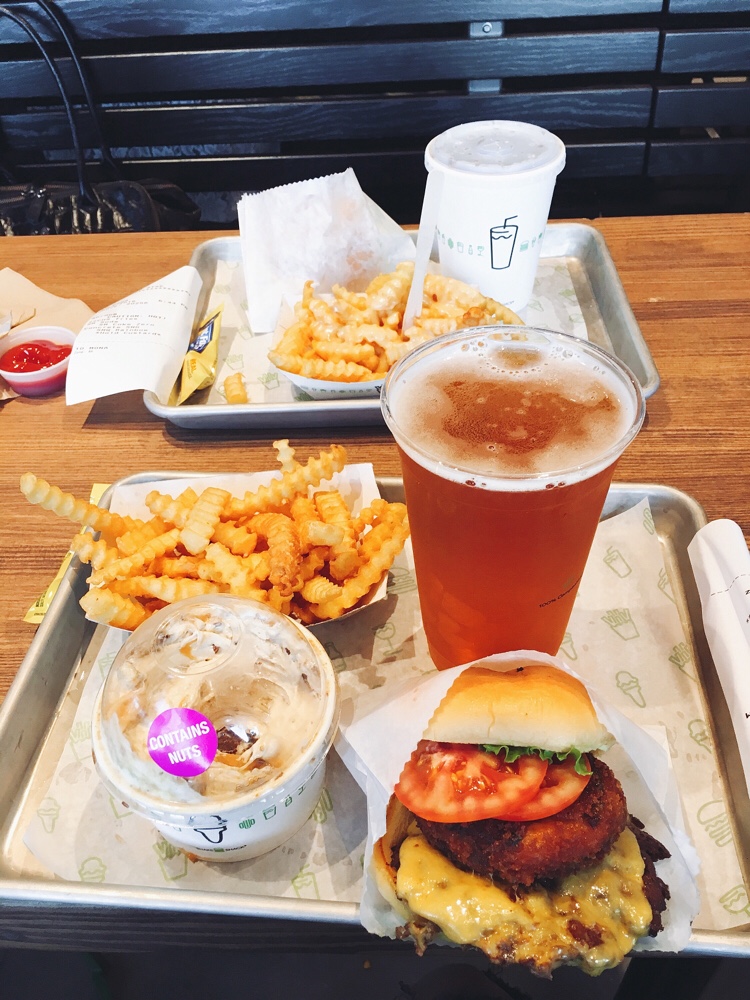 Oh, the trials and tribulations I had to endure to finally get this spread in front of me. I had to down a large ShackMeister Ale in order to get my shit together and prepare
for what was about to go down. I also furiously stuffed the entirety of those sexyass crinkle-cut fries in my mouth because I could not restrain myself from doing so. WILL YOU LOOK AT THEM!? 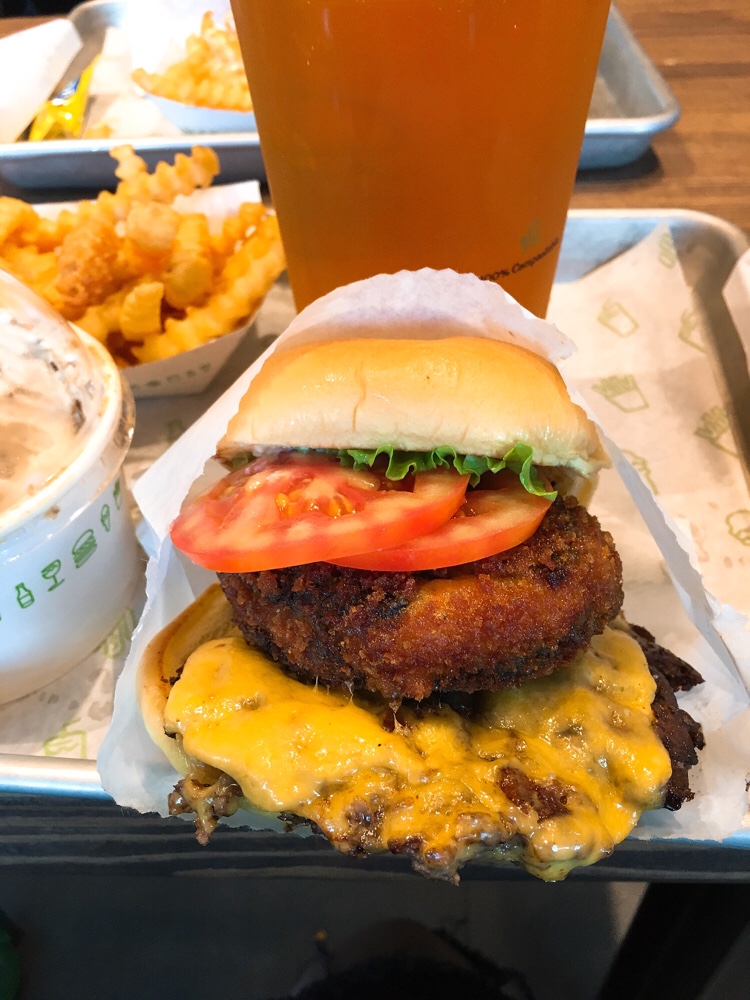 I ordered the Shack Stack burger, which is a cheeseburger with a fried Portobello mushroom STUFFED with muenster and cheddar cheese. Yes, that fried thing sitting on top of cheese is full of cheese. Although the burgers are much smaller than I thought they would be, adding cheese filled frieds to them definitely compensated for that. This burger was fucking amazing and I was not disappointed, well worth the sunburn from waiting in line. 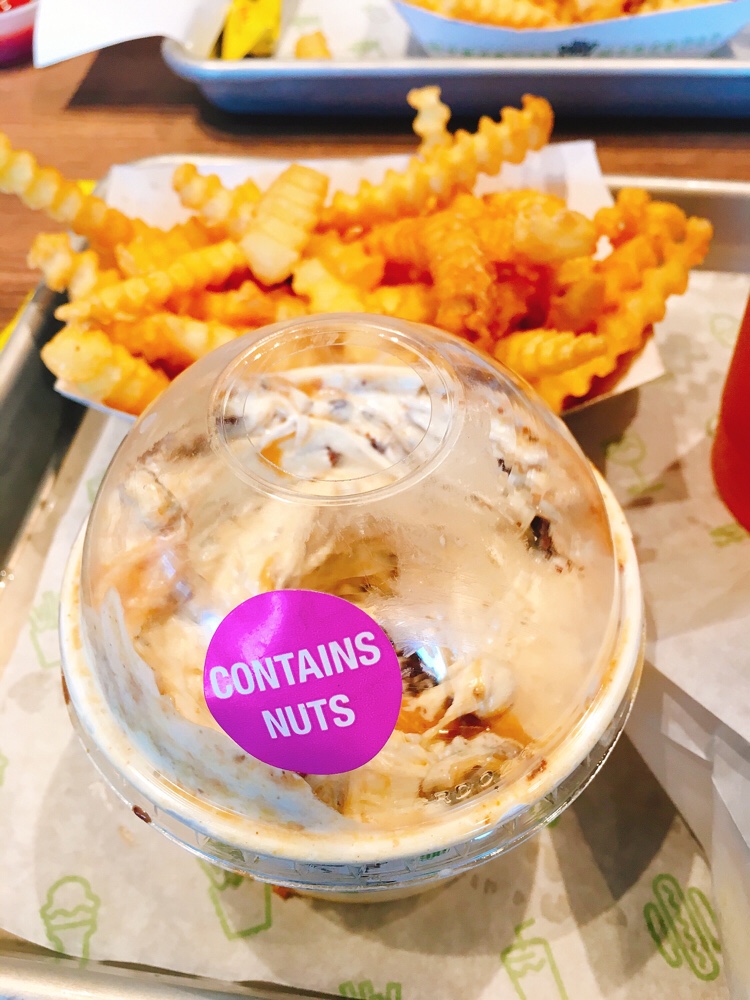 This sticker tried to tell me to contain my nuts and to that, I said "FALL BACK". One cannot simply contain their nuts when there is a slab of frozen custard waiting to be destroyed. This here is the Brownie Points concrete, which is vanilla frozen custard with salted caramel chocolate brownie, peanut butter sauce and chocolate toffee mixed in.

Overall, I would return. Possibly on a weekday between lunch and dinner, but no other time. Also, I don't know who keeps comparing this to In-N-Out, but they need to be stopped. They are two completely different things that need to be appreciated separately, like Ace Ventura: Pet Detective and Ace Ventura: When Nature Calls - both individual masterpieces that cannot be compared.

If you have a low tolerance for bullshit and refuse to wait 30 minutes in line for a burger a.k.a. a normal, sane person, you should hit up Amboy in Chinatown. My new favorite chef and probable cousin, Alvin Cailan (the genius responsible for Eggslut) opened this Filipino barbecue spot in the Far East Plaza. 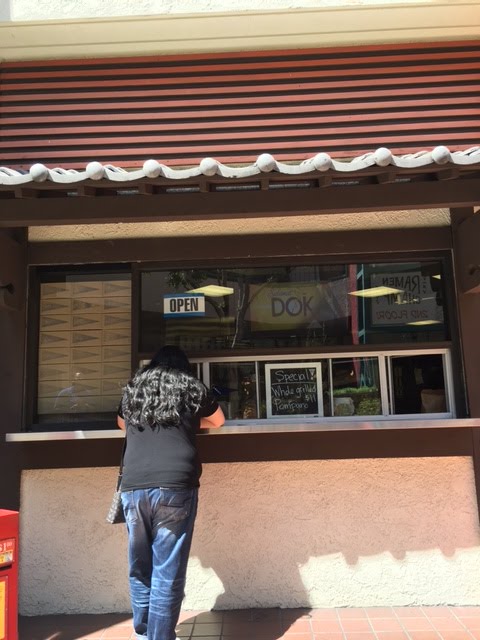 It was kinda hard to spot, but it's hidden behind this discretely marked window inside the plaza. I kinda just crept up to the window and whispered, "Amboy, ka yo?", which may or may not be Tagalog for "Are you Amboy?" I'm not sure, my Tagalog skills are tragic and the lady at the window clearly was not Filipino, so we kinda just stood there staring at eachother. Thankfully, there was a menu that confirmed that I was indeed in the right place.

They were out of the pork belly and the grilled whole fish, so I was a little bit sad. But we settled on the steak and pork shoulder instead, which are two choices no one can complain about. 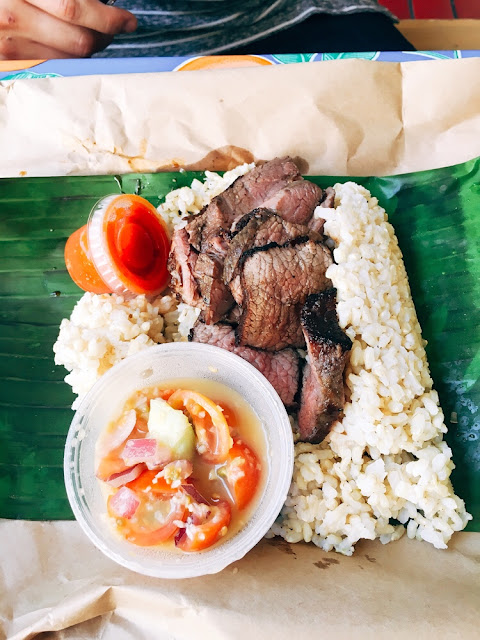 WILL YA LOOK AT THAT!? The steak and brown rice were beautifully wrapped in a banana leaf and served with a pickled tomato salad and this fireass hot sauce. It was so simple, but so good. My boyfriend just kept muttering, "so fresh" and groaning the whole time. 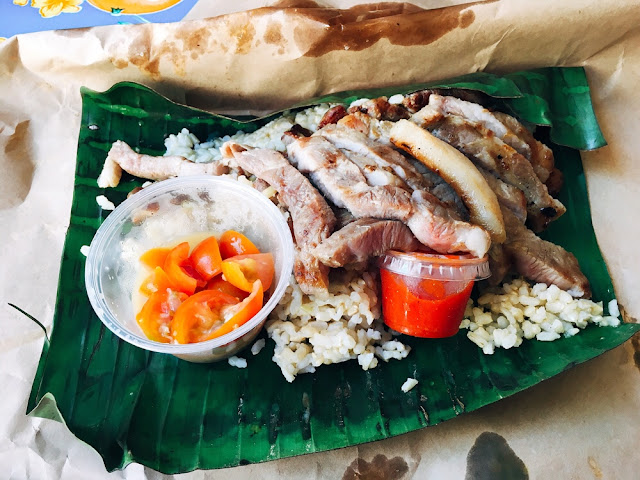 I got this gorgeous pork shoulder, which had the same setup and it was fucking lovely. There is nothing better than smoky tender meat on a bed of carbs. It's the simple things, guys.

Ugh, I WANT FILIPINO FOOD AGAIN. OR A BURGER.
ME HUNGY!! 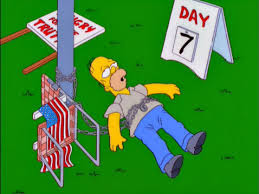