Eating My Way Through The Blues Trail: Memphis

After immersing ourselves in Nashville's vibrant and bustling country music hot chicken scene, our spirits were rejuvenated and ready to take on Memphis. We half-consciously drove three hours down the interstate at 6 a.m. and made it to our Airbnb located in downtown Memphis just in time to not collapse to our deaths from exhaustion. I learned a very important lesson on this trip and it is that years of sitting in LA traffic have destroyed my patience for driving. Like, I'm about ready for my "FUCK DRIVING" neck tattoo and to trade my car for a one-way ticket to New York to fulfill my dreams of becoming a pedestrian. So if you know of any airlines that are willing to barter tickets for an old Prius, please let me know.

We didn't have chargrilled oysters in New Orleans, so when we saw Pearls Oyster House had some of the best ones in Memphis, our fat asses ran (Ubered) directly over there for lunch. 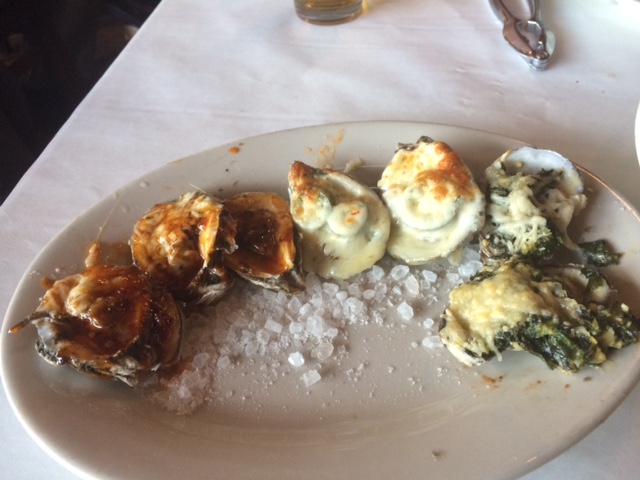 Had the Oyster Sampler with Chargrilled Oysters, Oysters Rockefeller and the Hot Shucks with jalapeno and pepper jack cheese. SWALLOWED 'EM WHOLE and no, I'm not okay. 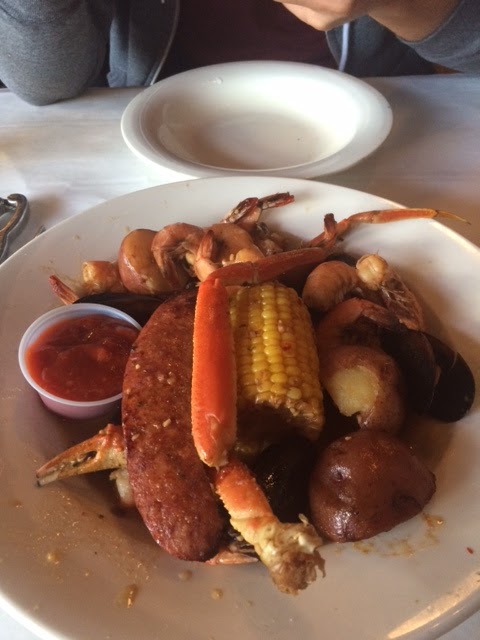 We shared the Shrimp Boil and it was like eating Boiling Crab's grandmother. She was sweet, had the decency to arrive on a plate with silverware and didn't make me say the word "bang" when I ordered her.

It was New Year's Eve and around 30 degrees out, so we had to throw on long johns and galoshes along with our party clothes. We hit Beale Street because they were doing a guitar drop at midnight at the Hard Rock Cafe and we were eager to be a part of the shit storm. 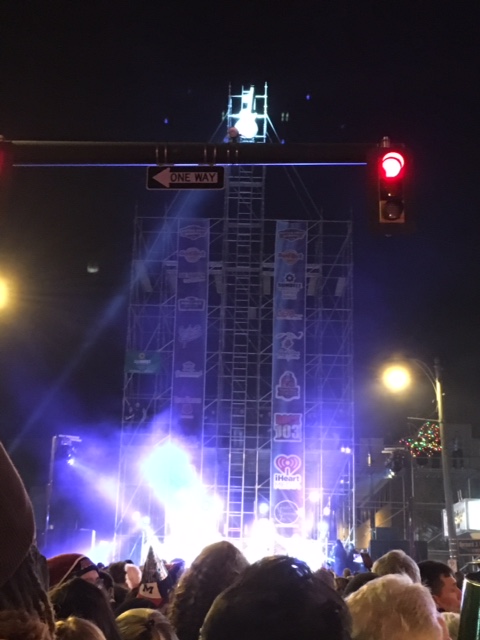 This glorious R&B band performed right before midnight and the guitar dropped at like 12:30 am. It was as if I planned it myself. 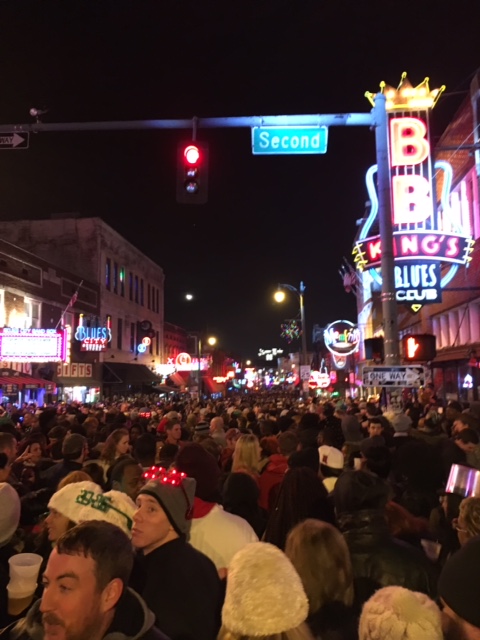 It was lovely pummeling my way through a crowd of drunk people. I really felt like I was in my element. 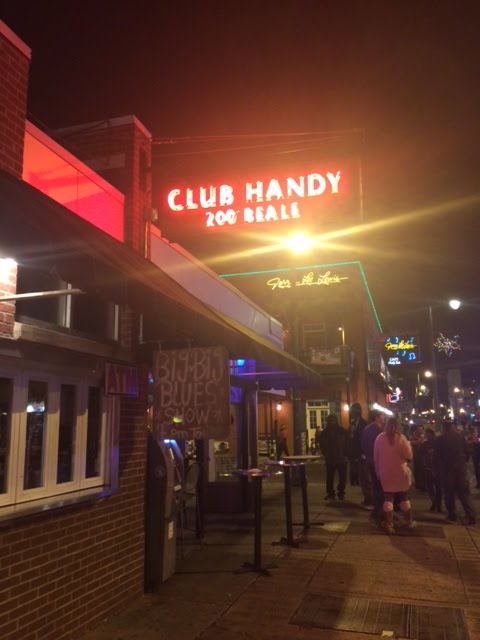 IF YOU ARE EVER ON BEALE STREET, YOU MUST GO TO CLUB HANDY.  We walked by and there was a live blues band just killin' it. I think it was their house band and we went here both nights we went out to watch them and their patrons, who are some the nicest and most clinically insane people I've ever met. Cheap liquor, a dopeass blues band and crazy people are all you really need to run a thriving business. 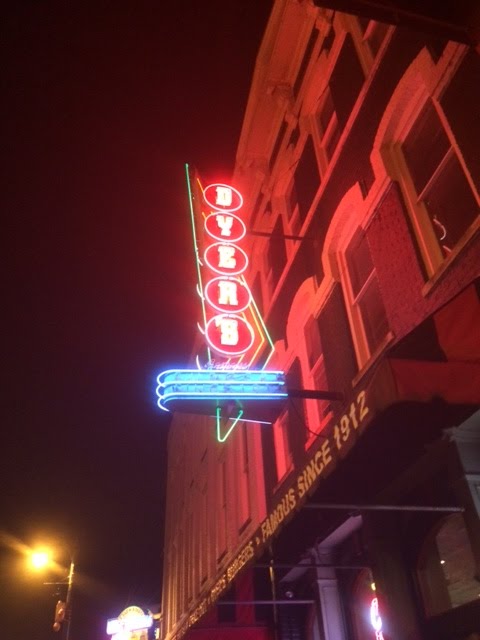 At around 3 a.m., we mosied on over to Dyer's Burgers. I'd seen this place on TV before, presumably on some variation of Fried Paradise and I felt an overwhelming sense of accomplishment for having this as my first meal of 2016. 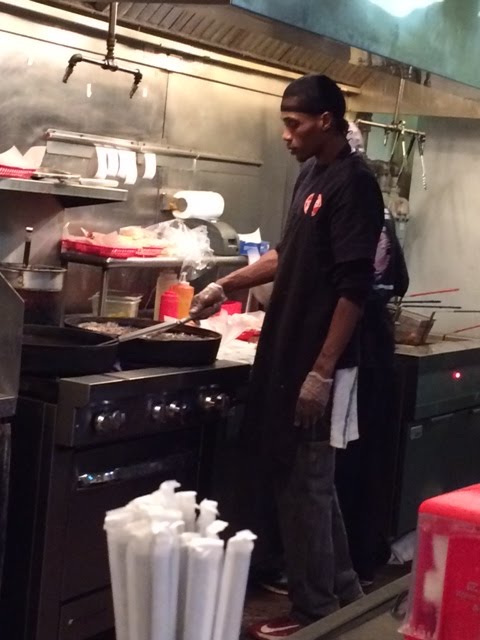 This place is known for frying their burgers in cast-irons full of grease that has been preserved for almost a century. Like, they've been saving this shit since they opened in 1912 and have been frying burgers everyday in it since. I'm just gonna go ahead and assume that this is safe since the Tennessee Department of Health hasn't shut it down? 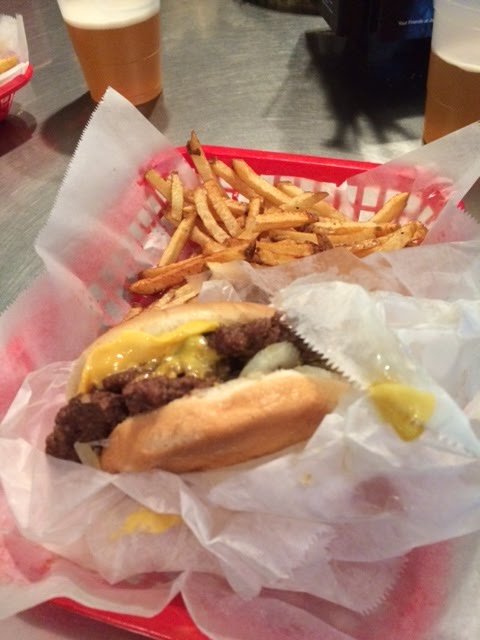 My expectations were pretty low and I was about twenty sheets to the wind, so I was blown the fuck away. I got a double cheeseburger, which was just meat, cheese, mustard and onions.  First of all, I love me a simple burger with a fat-laden juicy patty and American cheese, so this was straight up heaven/a caloric catastrophe.

The next day, we did absolutely nothing. I was comatose and already embalmed in Dyer's grease, so I just went ahead and pronounced myself dead.

Miraculously, I snapped out of it the next day with the healing powers of Gatorade and Advil. We were very behind on our BBQ eating schedule since we were immobilized from not having seen a vegetable in a week, but knew we would regret it if we listened to our bodies cries to stop poisoning them. After much debate, we settled on going to Cozy's Corner BBQ. From what I gathered, it was a favorite amongst locals and that was good enough for me. 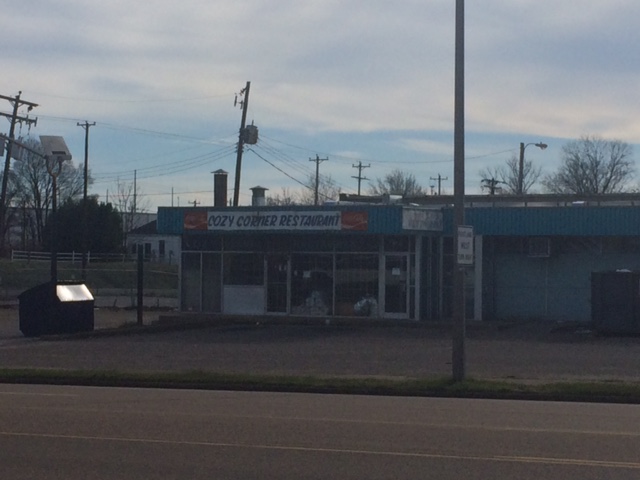 The original Cozy Corner restaurant was closed because it was damaged in a fire. If you encounter this, WALK ACROSS THE STREET. 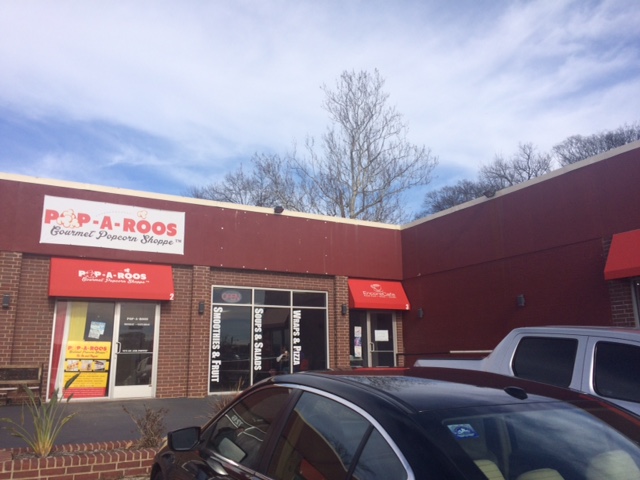 It's hidden in this plaza, disguised as a deli that sells wraps and salads. I once bought discounted Disneyland tickets from an office hidden inside a fake deli, so this seems to be a popular front for people slanging majestic goods. 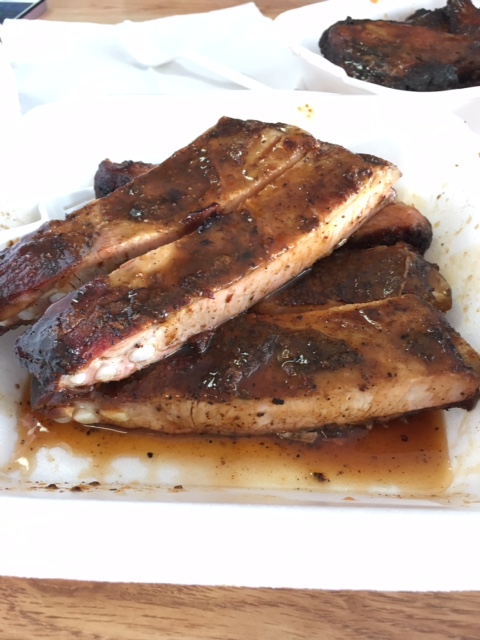 The instant we walked in, we made a few friends (more friends than I currently have in California) who recommended pretty much everything on the menu. We could not pass up getting a rib plate because it would be criminal to not eat ribs in Memphis. Like, TSA would detain me for being an idiot. And boy am I glad for that because this osseous, sauce-drenched miracle made me a woman. 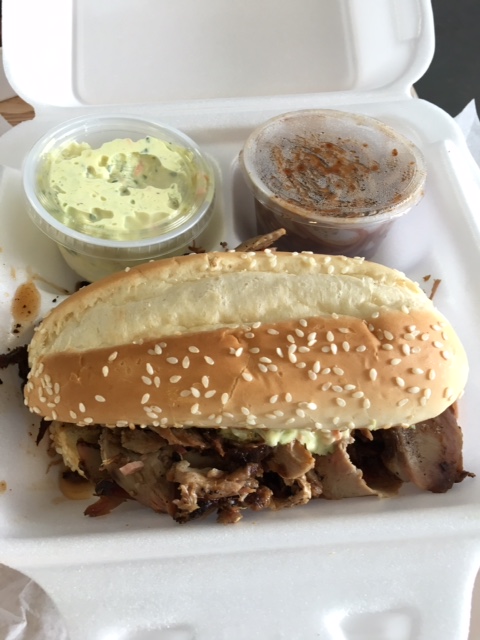 Secondly, I'd like to introduce you to the Sliced Pork Sandwich that impregnated me with joy. He arrived alongside his two accomplices and my new sister wives: Cole Slaw and BBQ Spaghetti. Our babies are all deformed. 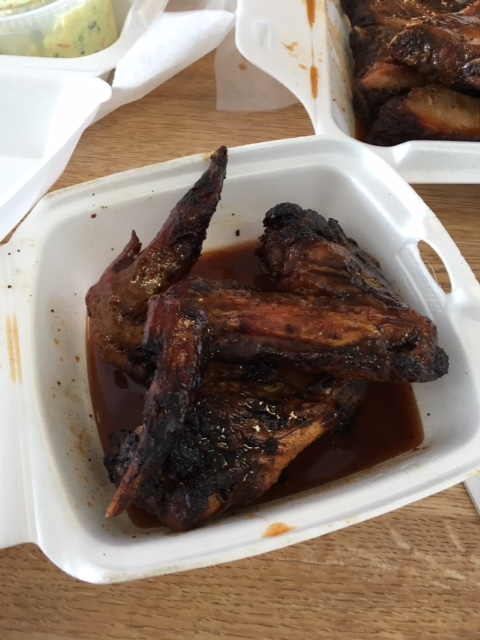 If anyone knows anything about me, they know that my #1 hobby is chicken wings and these happen to be drenched in my number #6 hobby, BBQ sauce. I'm not sure I've ever had BBQ'd chicken wings that have been smoked in a real-life smoker and drenched in non-KC Masterpiece BBQ sauce, so this was a very transformative experience for this callow youth.

Our next stop on our 5 hour tour of Memphis before our flight was The National Civil Rights Museum. I cannot recommend this museum more. It was built on the site of The Lorraine Motel, where Martin Luther King Jr. was assassinated and is actually attached to the former motel itself. 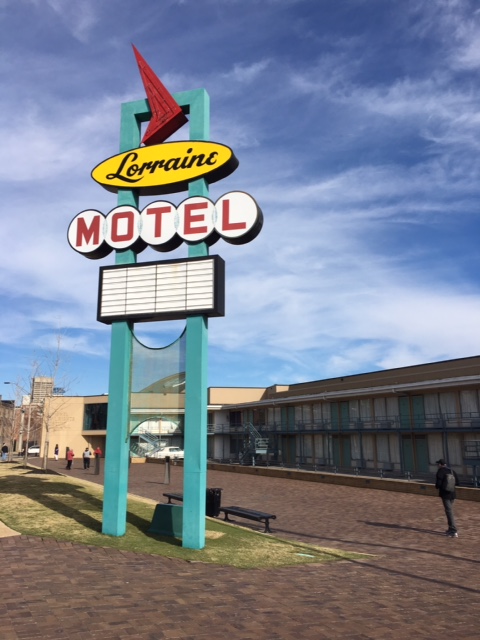 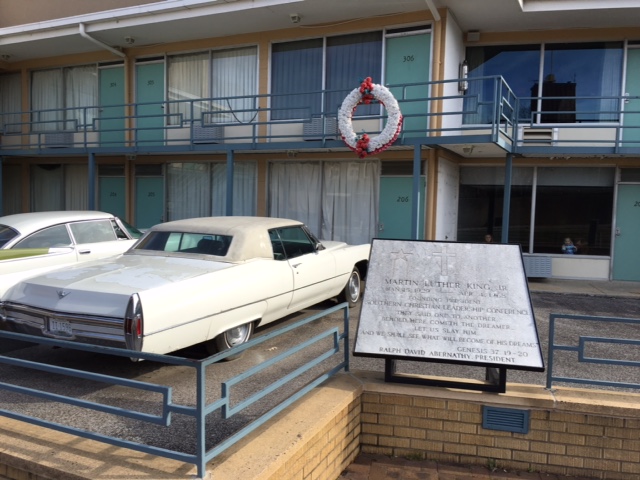 This is the memorial in front of the room where MLK was shot. I don't think any American (or human) can visit this site without shedding a tear, so bring tissues. It was so powerful and haunting, I had a hard time keeping it together and I hadn't even entered the museum yet. 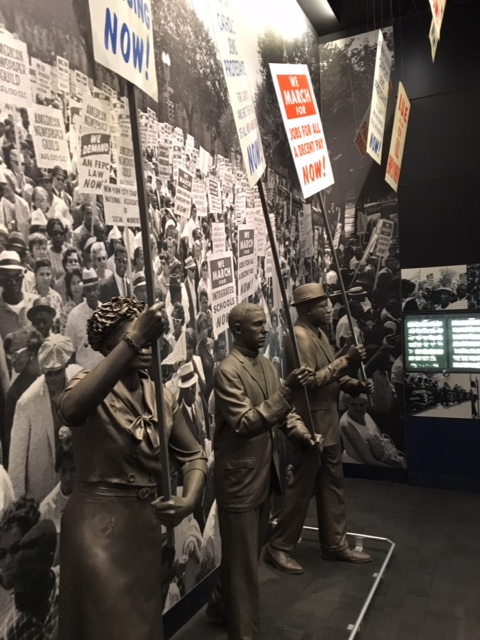 The exhibits walk you through the beginning of the slave trade to the rise of Jim Crow to the Civil Rights Movement. These were some of the most engaging exhibits I've ever experienced and they did a great job presenting everything in such a compelling and absorbable way. Like, there was an actual bus that we could walk onto and sit next to a statue of Rosa Parks and we could walk through the inside of Lorraine Motel and see MLK's motel room.

My boyfriend and I agreed this was the highlight of our Memphis trip and yes, we took into account the century-old burger grease when we decided this. I would even say that this was better than when I saw Jerry Seinfeld's puffy shirt at The Smithsonian and John Wayne Gacy's clown suit at the Crime Museum - and that is a powerful statement, my friends. 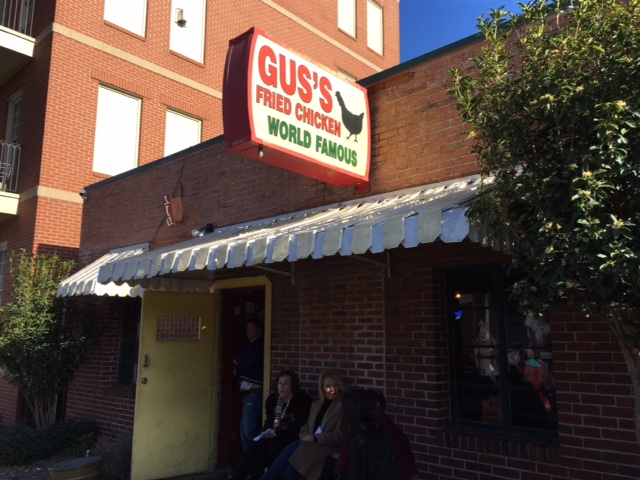 Once I was able to harness my emotions again, we headed a block or two up to Gus's World Famous Fried Chicken to get an (un)necessary last-minute meal before we hit the airport. There was an insane wait, so we got a Half Chicken Plate and a slice of chess pie to-go. 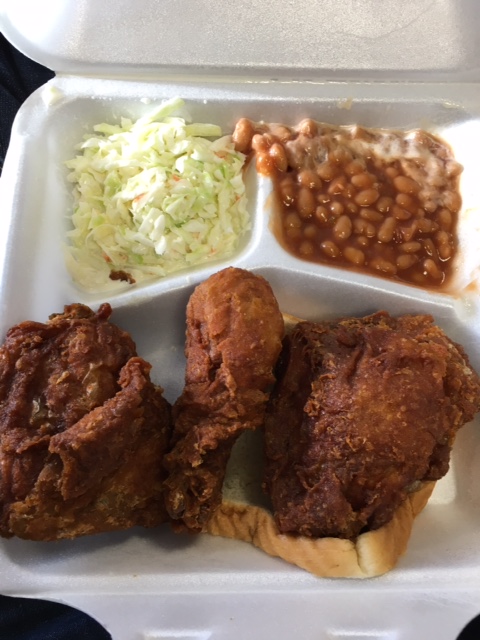 We actually ate this plate on our laps at the gate at the airport. Nobody looked at us weird and we experienced zero humiliation and that is why I LOVE MEMPHIS. The chicken was crispy, juicy and deserves all the accolades because that was some bombass fried chicken. I found out they're opening a location in LA and I fully intend on trying to get a job there ;) 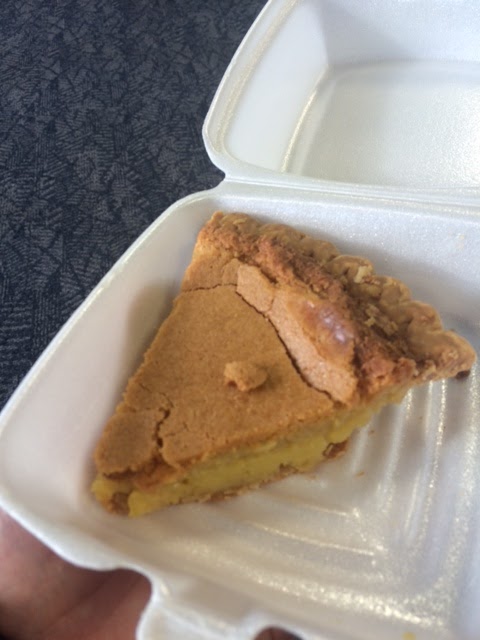 The Chess Pie was kind of like a custard pie? It was possibly too sweet, but the crust was so good that I stuffed the whole damn thing in my mouth before I could even make up my mind about it.

I know, what you're thinking and correct, I did not eat nearly enough barbecue, but it's safe to say that Memphis is one of my new favorite cities and I would 1000% return. How does one apply to be a judge at the World Championship BBQ Contest at Memphis in May?