My lifelong dream has always been to somehow lose weight while laying down in front of a television. I had always placed that dream outside my realm of possibilities next to my dreams of winning Star Search and attending the Hogwarts School of Witchcraft and Wizardry. That is until I heard about Shape House on the radio. I almost crashed my car when I heard that you can lose up to 1,000-1,200 calories laying down and sweating in 50 minutes. I immediately looked it up on Yelp and people were reporting that each sweat station is equipped with it's own TV with a fully loaded Roku. This is when I realized that contrary to what I had always believed, Jesus does listen to my prayers.

Since my pal, Jessie was going to be in town from San Francisco, I thought I would give her the full LA experience by making her partake in fad exercise. She also shares my opposition to movement and love for on demand television, so naturally this would be the perfect bonding activity for us. I found a Groupon for $29 for one session, which is a great deal since it's normally $45 per session. We made our reservations through their website for the Pasadena location. I even called ahead to make sure they sat us next to each other and the nice woman on the phone said, "Okay, I have you guys next to each other, we can leave the curtain open so you guys can sweat together." So romantic.

The website explicitly advised against consuming alcohol before and during the sweat, which was kind of a problem for us since we had brunch scheduled at Franklin and Company before our sweat session. Since I was scared of fainting or getting a nose bleed during our sweat, I insisted Jess and I just share a small daytime cocktail. 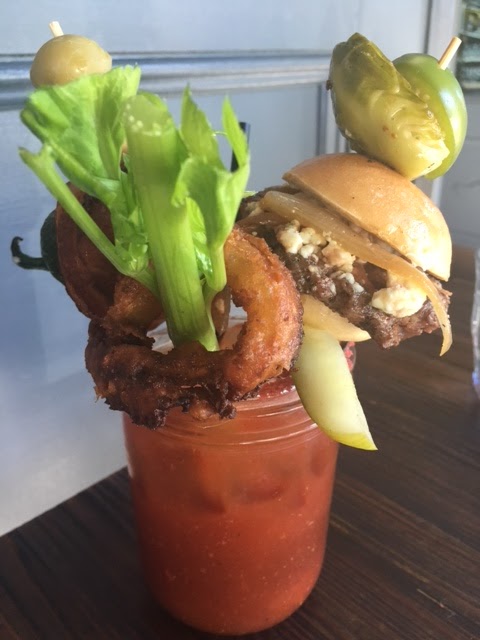 And so we shared this elegant jar of bloody mary garnished with what looked like a deconstructed appetizer sampler from Applebee's. And possibly a glass of mimosa each. WHAT!? They were only $3. But I made sure I drank tons of water... 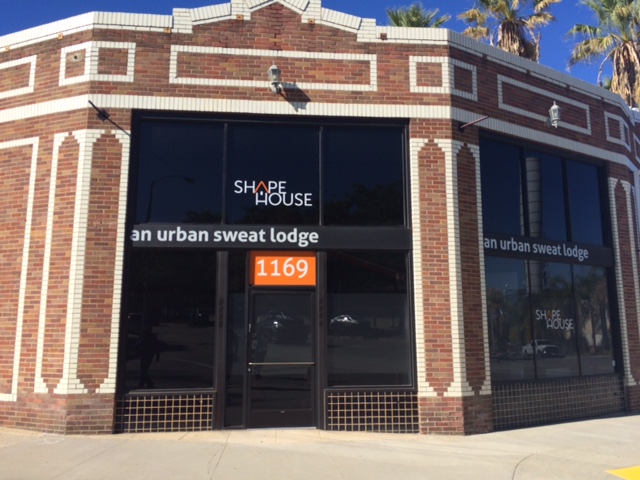 This is the exterior of the Pasadena Shape House location. "An urban sweat lodge" is a perfect description of this place. 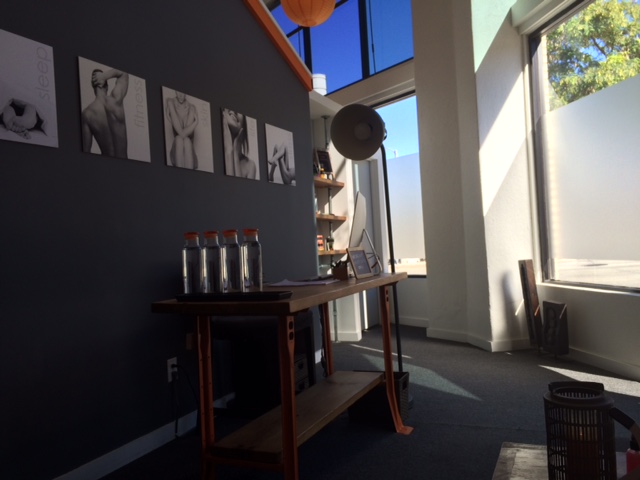 The waiting area where we signed something on an iPad that I assumed was a waiver? Not sure, didn't read it. I was just struggling to use something as advanced as an iPad.

The nice ladies at Shape House lent us sweats, large orange shirts and socks since we had neglected to bring an extra pair of clothing to sweat in. I honestly thought we would be in our underwear during the session, so I mistakenly wore a nice lace bra and panties. So much for that. 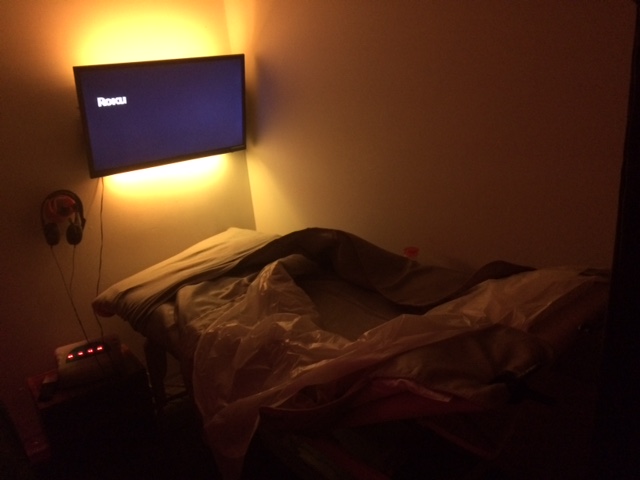 After we got dressed in what looked like my grade school P.E. uniform, we were led to the dimly lit upstairs area where all the sweat stations are. We were helped into the sweat beds and given a large fancy glass of water. They taught me how to use the Roku and showed me the call button in case I needed more water or needed encouragement. Then they wrapped me up like a burrito in this heavy heated blanket thing. I'm gonna be honest, I was already sweating after I walked up the stairs, so I was sweating pretty profusely once I was secured inside the heated tortilla. 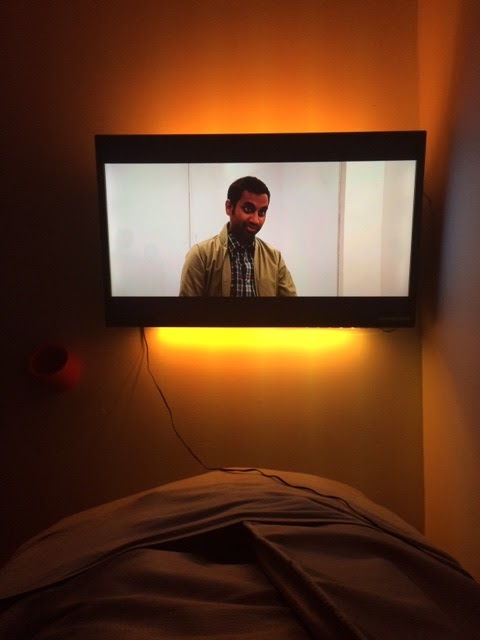 There was a 4 minute introductory video and then I got to choose between Netflix, Hulu, HBO GO and like a million other streaming apps. It was fucking luxurious. I settled on Aziz Ansari's hilarious new show, Master of None.

At first, the heat was kind of uncomfortable but I just drank water and focused on the television. I eventually got used to it and then it became pretty tolerable. I also did some fantasizing about cancelling my ClassPass membership because this was clearly a better workout for me.

Every now and again, I would glance to my right to make sure that Jess was still alive. Just kidding, I was just treating myself to this hilarious sight. 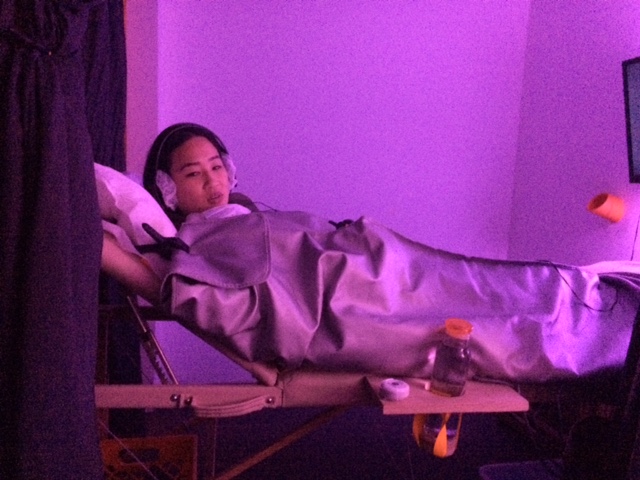 Time kind of flew by, but it progressively got hotter inside the burrito. According to the intro video, the last 20 minutes are supposed to me the most intense. I noticed the both of us had freed our arms from the blanket and were flailing our arms around above our heads because it was too hot toward the end. The ladies came back around with cool lavender towels, which I really needed and appreciated.

After the sweat, they lead you to a recovery room downstairs where you can chill out and eat oranges. 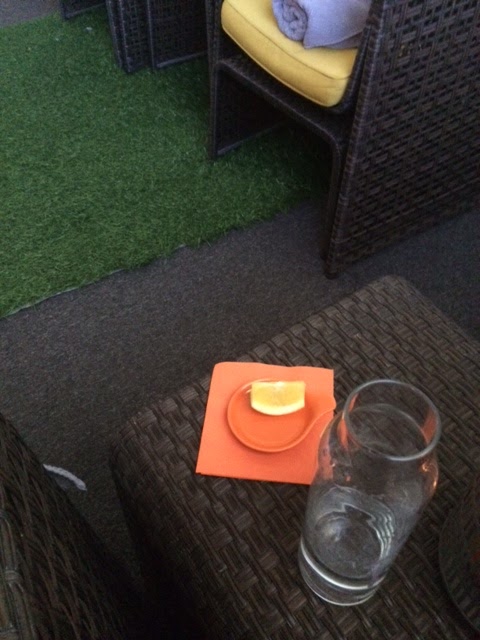 Apparently Jess was on the verge of quitting throughout the entire sweat session and was a much more violent sweater than I was. I assume this is because I made her drink the majority of that hamburger cocktail. 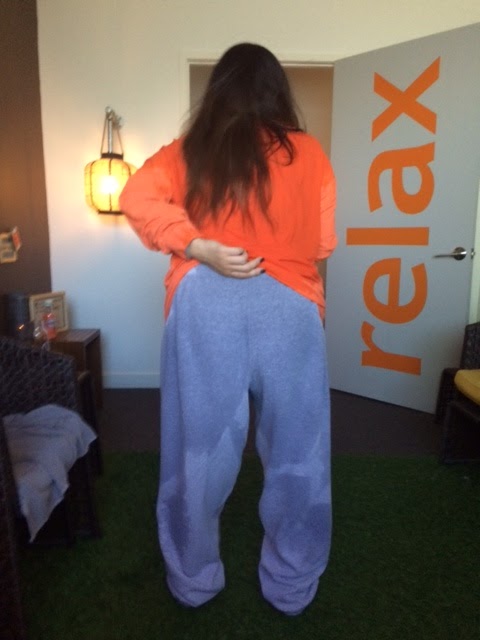 I asked her if she pissed herself, but she claims that this is just booty sweat.

Overall, I thought urban sweat lodging was delightful. Everyone that worked there was really nice to us and made us feel comfortable and I literally burned hundreds (possibly thousands?) of calories while watching television. Shape House really turned this little lady's dreams into a reality.

To reward ourselves for treating our bodies to such a detoxifying cardio session, we decided to get ice cream. 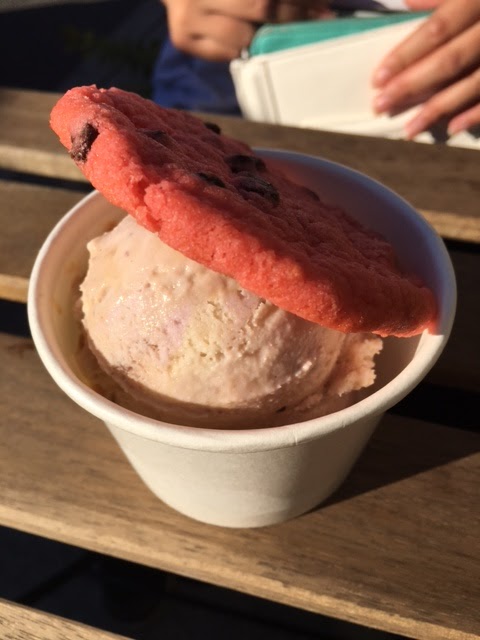 We hit up Cookies and Milk in South Pasadena for this delightful open face sandwich with taro salted caramel ice cream and a strawberry chip cookie.

Stay tuned for all the other fat, non-calorie burning activities we did throughout the weekend. Why? Because it involves eating an extraordinary amount of dumplings!
Email Post