I wish that I could say that I haven't posted anything in over a year because I've been away building houses for orphans in Botswana or busy with my new internship at a taqueria, but I cannot truthfully admit that. I just assumed nobody read blogs anymore and dedicated my life to watching every season of Breaking Bad, Sons of Anarchy and Game of Thrones instead. If you know anything about any of those three shows, you know that the plot lines are incredibly stressful, so it's been very taxing on my psyche and as a result, it has stunted my creativity and ability to form sentences that aren't threats.

Anyhow, I am back and proud/sad to announce that after two months of dieting--I am fat again. One debouched weekend in San Diego that my friend Jess and I dubbed as "TOUR DE CARNE ASADA FRIES" reversed two months of sloppily attempting to eat paleo and exercise in about two hours. I'm still not sure if I feel any remorse since I value carbs and cheese more than only having one chin. The only thing I value more than carbs and cheese are photos of carbs and cheese that I'd eaten and showing them off on the internet.

First off, I do not recommend the night life in San Diego because you will get photo bombed by people that wear shirts like this.

Since the purpose of this visit was to eat as many carne asada fries as humanly possible, we hit up a shady Mexican restaurant drive thru at 3:30 am to acquire these puppies. They weren't the best since they were the only ones available at that hour and they kind of look like chorro, which I've learned is the Spanish term for diarrhea. 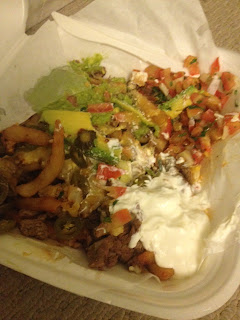 Luckily, San Diego is a thousand times more charming in the day time. We went to Hash House A Go Go since Yelp was reporting long wait times and fancy fried chicken dishes, which can only mean this place is glorious. We ordered fried chicken waffle towers, fried chicken benedicts and pancakes that I mistook for delicious sleeping bags.

We spent the rest of the day at the beach, drinking and riding bikes because that's legal and all. The sun eventually went down and we realized that we hadn't consumed nearly enough asada fries and too many Straw-Ber-Rita's, so we went on a ravenous hunt for asada fries.

Lolita's Taco Shop was without question the best of the three and is definitely in my top two of all time. The Instagram filter in this photo doesn't quite capture the magic of the cheese and the other accoutrement, but that magical pile of calories was THE JUAN. 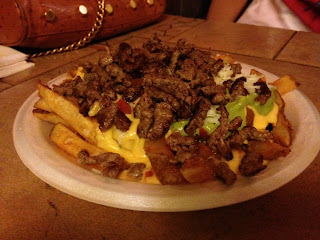 Our last stop was El Zarape because we read that they had lobster burritos and scallop tacos. Unfortunately, they discontinued their lobster option because it was too ballin for them. The scallop tacos were off the hook and the fries were not too shabby since they used straight up nacho cheese. Or they could have all been bad because I was exceptionally wasted at this point.

We spontaneously attended a drag show at the bar next door, got confused and then left San Diego. TOUR DE ASADA FRIES was a rousing success and I am glad to announce that I will be making it an annual event. Eating carne asada fries is officially my favorite sport next to eating hot dogs at baseball games.

For some reason, I went to Disneyland the next day after getting two hours of sleep because I obviously hate myself and will do anything to hang out with my friend Jess when she is in town because I am desperate for Chinese companionship. The only thing Disneyland has going for it are the snacks. I'm pretty sure my uterus shriveled up and died after being around all those screaminass babies all day. I think the government should routinely send teenaged girls to Disneyland to discourage them from getting pregnant. I am now barren from the experience. The snacks, however, were the only thing that prevented me from crying the entire time. 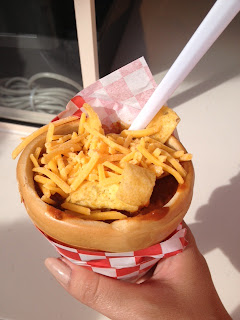 The Chili Cone Carne was well worth the billions of dollars that went into erecting the new Cars Land. It's a bread cone filled with chili, cheese and Fritos. Whoever dreamed up this symphony might as well have shat on Mozart's grave. 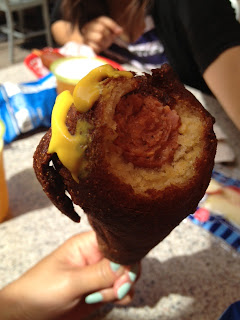 The main reason I agreed to go to Disneyland was because my friend, Mimi promised to buy me a HOT LINK corndog. Nothing motivates me more than the promise of a good sausage. Well, Mimi came through on her promise because she is a down ass bitch and I would have killed her. It was hands down THE BEST CORN DOG I HAVE EVER EXPERIENCED IN MY LIFE. If you want your life to change for the better--eat this thing 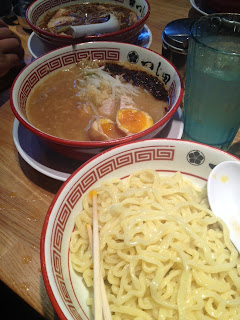 I highly suggest the tsukemen at Tsujita LA Artisan Noodle Annex in West LA. I'm pretty critical when it comes to ramen since I think everything pales in comparison to Daikokuya, but this place is pretty special. I just really love fat, porky broths and fresh noodles. 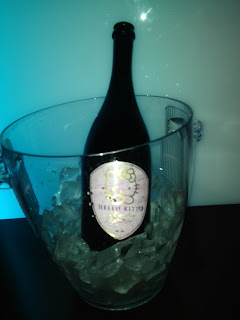 Lastly, I am a very classy and grown lady. I got Hello Kitty champagne bottle service at an Alice in Wonderland themed bar called Rabbit Hole last night. A man who was clearly very jealous was heckling at us for drinking Hello Kitty champagne and then proceeded to fart next to our table and walk away. Luckily my boyfriend chased down the jealous fart bandit and confronted him about farting in the presence of such sophisticated ladies. Of course, he denied it but you know what they say--whoever denied it supplied it!

I promise to write more especially since I am on the cusp of becoming an artisan sausage maker. I haven't made any yet, but I've been thinking about it...A LOT.

Anonymous said…
i started a nacho blog, but then got lazy and stopped posting. your blog is pretty awesome though. keep up the good work
August 26, 2013 at 11:17 AM

carne asada restaurant said…
This posting is marvelous and what a fantastic research that you have done. It has helped me a lot. thank you very much. Feel free to visit my buy portfolio lighting site.
October 31, 2013 at 8:21 AM

JEDDIE K said…
CHECKED BACK AND SO HAPPY YOURE BACKKKKKK LOVEEEEEEE LOTS OF YAY AREA LOVEEE!
June 17, 2015 at 5:11 PM

nnotg6vz7y said…
A 50x wagering requirement is in impact for all bonuses until in any other case said by the on line casino. The no download platform is out there for cell and desktop users. Our Jackpot City on line casino evaluation famous that this on-line gambling site is in style in quantity of|numerous|a selection of} countries around the world. They do nonetheless have nation restrictions and so they do not accept US or UK gamers properly as|in addition to} gamers from South Africa and quantity of|numerous|a selection of} European countries. If you are be} looking for a high UK on-line 퍼스트카지노 on line casino or the the most effective USA on-line casinos in 2022 be sure to|make sure to|remember to} check out at|try} our Top 10 reviews. Here is a shortlist of the countries that JackpotCity caters in the direction of|in course of} most and it is easy to see that Canada is tops on the list by taking a look on the current JPC winners - 6 out of 10 are Canadian.
January 20, 2023 at 11:31 AM