I believe I reversed about two months of running in about 3 hours the other day at the Santa Cruz Beach Boardwalk. I don't know what it is about carny food but it just does not fill me up and it actually makes me hungrier. I naturally fall victim to the "salty, sweet" cycle- after you eat something salty, you need something sweet, then salty again, and then sweet again. I find that carny food amplifies that emotion (yes, it is an emotion in my world) and sends me into a beastly rage.

So my friends and I started the day off at the Millbrae Pancake House, which is one of the Bay's best breakfast establishments and I base this claim solely on their generous and violent use of whipped cream. By the end of our meal, everyone at our tables eyes were crossed and had full-on whipped cream beards. Except for the toddler we had with us, who managed to maintain a Hitler mustache throughout the entire meal. 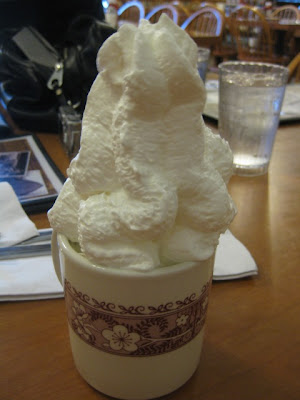 In this mug, buried somewhere beneath this behemoth pile of whipped cream is a puddle of hot chocolate. Again, the people here really know what their doing when it comes to whipped cream distribution and giving the public what they really want out of breakfast. Also, this is called the "hot chocolate" not the "whipped cream mug." 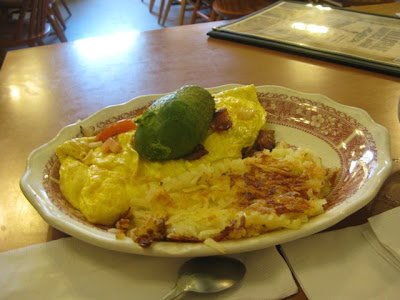 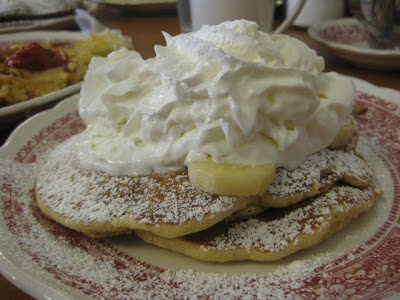 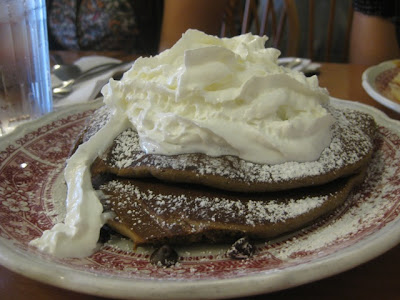 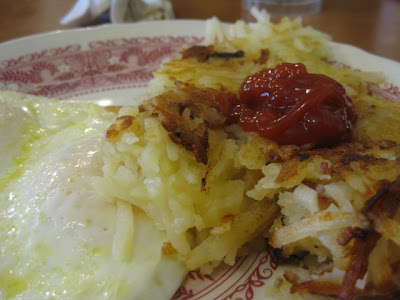 This is an artistic photograph of my over easy, farm fresh, jumbo hen eggs along with my browns of hash topped with a tomato puree. Simply divine. 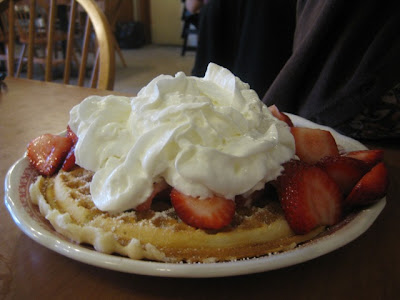 WAFFLES with a strawberry compote, draped with a delicate cloud of whipped topping. 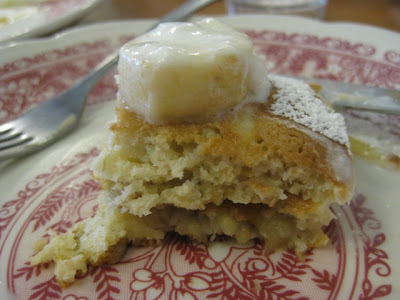 After 2 minutes of intense motorboating, I was able to pull myself away from the wreckage and take this glorious photo of my last bite.

After our light breakfast, it was off to the Santa Cruz Beach Boardwalk where the beer flows like wine and where the Hell's Angel's instinctively flock like the wild salmon of Capistrano. They have approximately 9,000 different food carts/booths and every type of carny food you can imagine, served by real-life 150 year old carnies and their toothless predecessors. 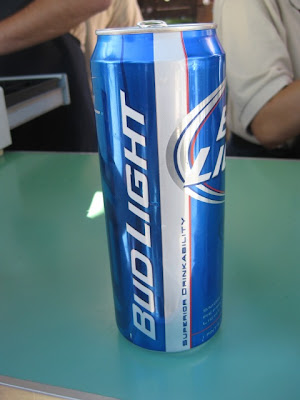 I was overcome with feelings of unbridled joy when I found out there are no open container restrictions along the boardwalk. I promptly purchased the closest 24 ounce Bud Light, poured it all over my body, smashed the can on my forehead, let out a war cry, and ordered a round for a group of questionably homeless patrons and some fourth graders. 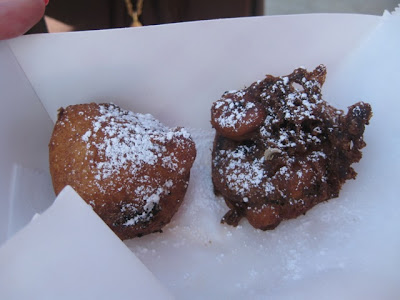 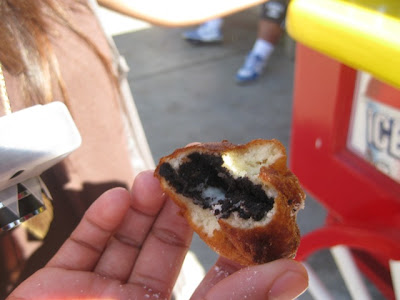 DEEP FRIED OREOS! Since we've met, I only think of them on two occasions and that's DAY and NIGHT. Actually according to Dailyplate.com, they are pretty low-cal...only 80 calories each! Am I right or am I right?? 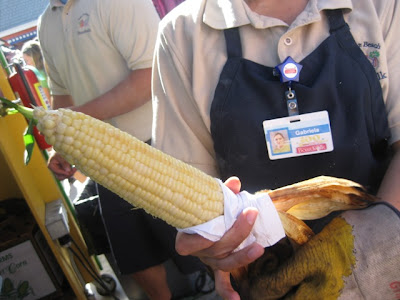 ROASTED CORN! There is nothing more refreshing and satisfying for my teeth and gums than some roasted corn on the cob! Lather these in butter and I'll have kernels permanently wedged between my teeth within 5 seconds of the carny handing it to me. 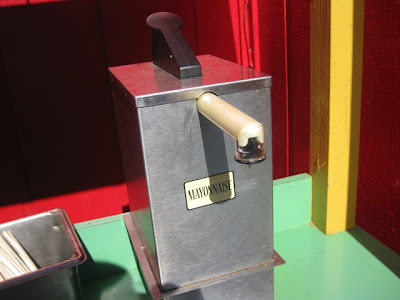 But in Santa Cruz, they do NOT play...they stay stacked with the ELOTE condiments! You build your own damn elote, leaving your cheesyass destiny in your own hands. It alllll starts right here, at the MAYO pump. I gave it a good 80 pumps until the carpal tunnel started to act up. 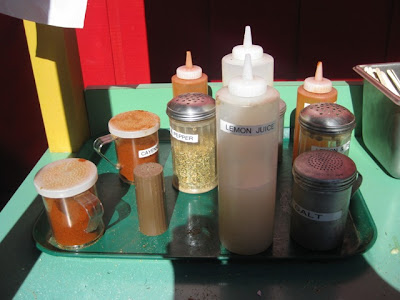 All you need right here: parmesan cheese, cayenne pepper, chili sauce, salt, pepper...THE WORKS! Actually you can't see the parmesan cheese in this picture because my homie, Gabby was probably molesting it somewhere. 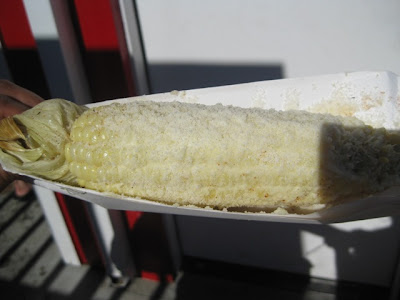 This is Gabby's elote...notably more cheesy than my own. 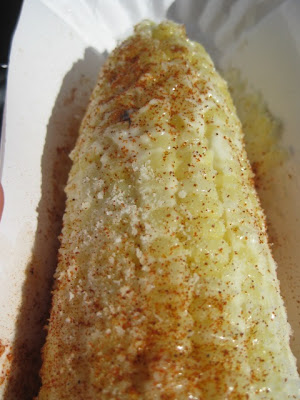 And this belongs in some sort of a Mexican art museum somewhere. If anyone knows of any, holla at ya girl cause I have a shitload of potentially prize winning Mexican food photographs. 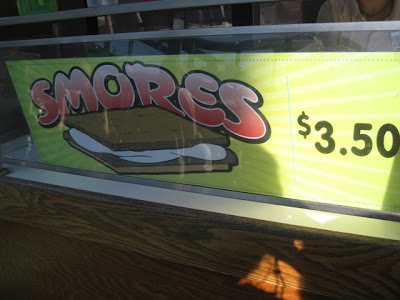 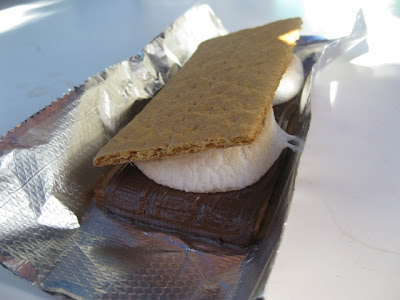 SMORES! I didn't know this delicacy propelled itself into carny food world, but it makes tons of sense, its delicious, bad for you, and you could probably easily make this for yourself for a fraction of the price. But everyone knows that food tastes better when its prepared by the hands of a carny. 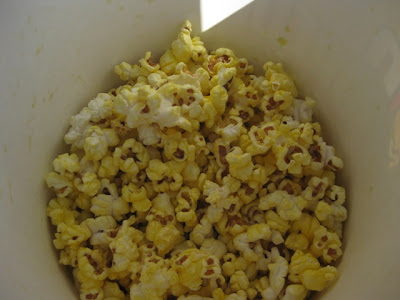 Popcorn is a must and they're like negative calories because after all, its just air. 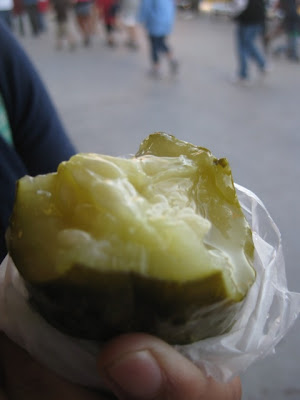 A jumbo pickle. Funny, cause I found myself in a jumbo pickle the next day when I found out that my jeans no longer fit around my fat ass. 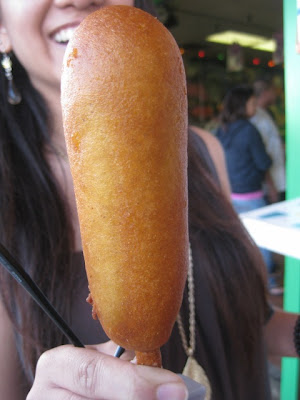 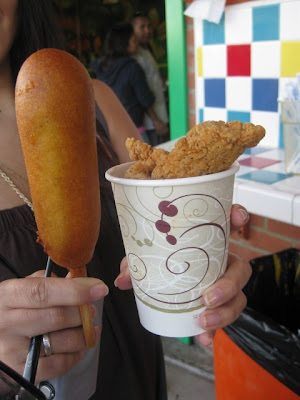 CORN DOGS AND CHICKEN TENDERS! Corn dogs are vital to the carny experience. I was planning on getting a foot long corn dog, but it was already the end of our two hour run at the Boardwalk and I didn't want my arteries to explode in public.

So after all that, we found that we still were not full and so, we went to eat pho at some place in Oakland. It was decent. Also, after partying that night, we found ourselves in line at the Jack in the Box drive thru.

And so at the end of the day, I was channeling a different kind of Carny... 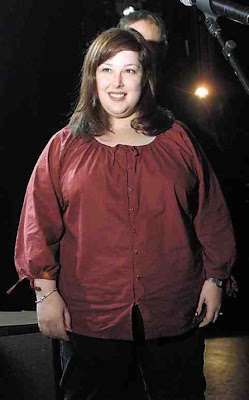 Where did you find such a wonderful way to add another layer to your back side?

I wish I knew so I could add it to my layers.

Viagra Online Without Prescription said…
I think this is unbelievable to eat 12 000 calorie is too much, it is better if you do some exercises and relax, stretching you body.
August 25, 2010 at 6:52 AM