Breaking News: I am Samoan

MAHALO! Well, it looks like I am once again the proud owner of a broken laptop. Therefore, blogging has become damn near impossible. So let me update you while I sit here and chug jars of maraschino cherries in the nude.

I had the honor of going to Honolulu for my cousin Amanda's graduation a couple weeks ago and I did a lot of prepping for my trip. Prepping as in I spent hours on end yelping food places in Honolulu and then sending my cousin creepy, cryptic text messages about food. I must say, my efforts were well received and I had some very pleasing encounters. 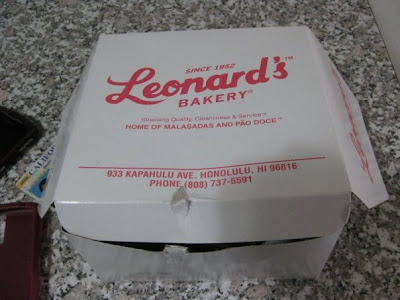 So my cousin greeted me at the airport with a box of malasadas from Leonard's. They're famous for their malasadas, which are pretty much Portuguese doughnuts. They're deep fried yeasty dough covered in sugary goodness. 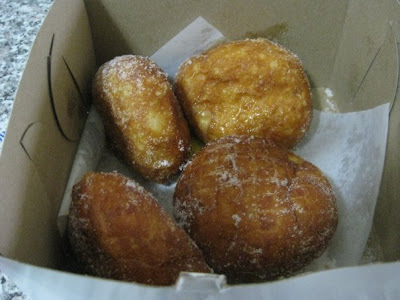 Well, suck me sideways...these particular malasadas were filled with mango custard. I'm not usually a fan of filled doughnuts but Leonard's has a bunch of different flavors like guava, haupia, and chocolate. I'm sure if you punctured my ass cheeks, mango custard would come flowing out because I probably have mango cultivating ancestors. More on this discovery later. 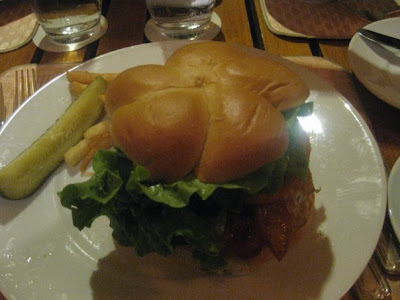 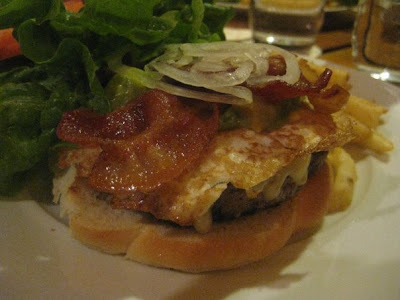 This is a Kahala burger from the Plumeria Beach House restaurant at the Kahala Hotel. It's an angus beef burger with fried egg, guacamole, bacon, white cheddar cheese, topped with a hibiscus flower-shaped bun. It's pretty much a boughie, Hawaiianized version of a Fat Burger with fried egg and bacon. And Lord knows I love me a FAT BURGER! 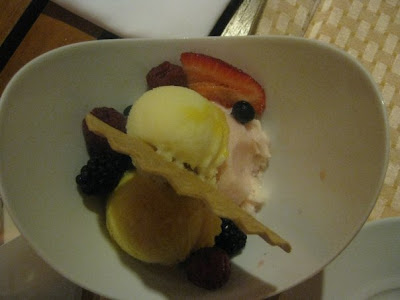 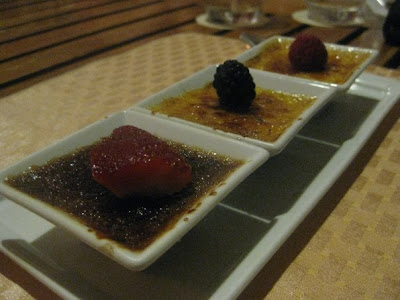 For dessert, we had the creme brulee sampler which had a regular, orange, a coffee creme brulee and we also had Hawaiian sorbet which consisted of guava, lilikoi, mango, and pineapple sorbet. The creme brulee inspired me to write a haiku that goes a little somethin like THIS: 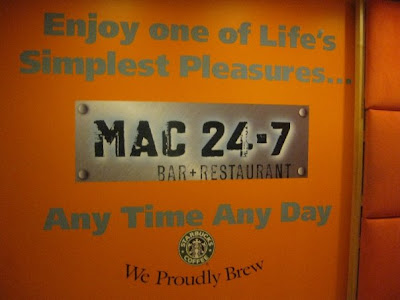 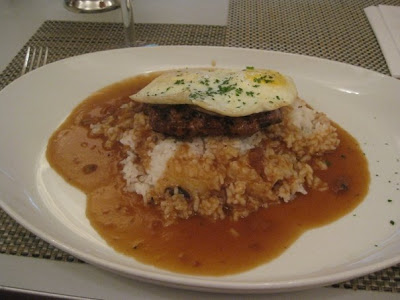 This is what a $17 loco moco looks like. Yeah, blasphemy...whatever, it was good. Another angus burger with fried egg atop rice and smothered in gravy. FRIEDS AND GRAVIES are always an amazing combo and always causes a violent reaction in the nether regions. 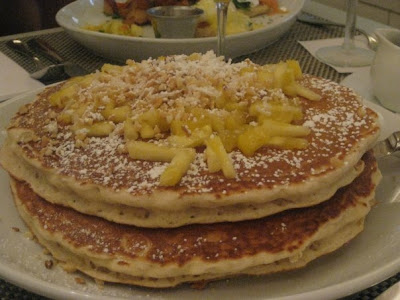 MACADAMIA NUT PANCAKES! 14 INCHES BLUUUUD! Trust me, these were fuckin monsters. If memory serves me corrects, the to-go box was an actual cake box and we needed a dolly and several scantily clad native beefcakes to help us carry the leftovers to the car. 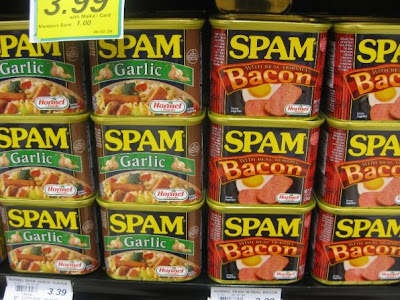 The single most amazing thing about Hawaii is that they have about a million different varieties of spam that are not available on the mainland. The most significant one being GARLIC SPAM. When my aunt made this for us, we were all screaming, jumping, and crying tears of joy. It was the most triumphant moment in the history of canned meats and definitely a turning point in my life. 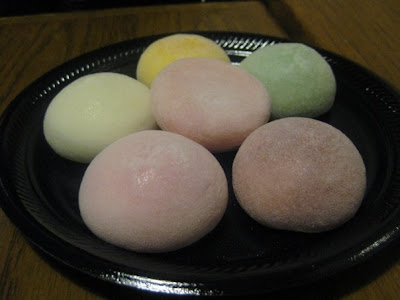 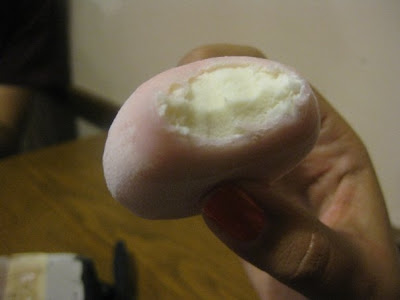 This is mochi ice cream from a place called Bubbie's. These are the most amazing mochi ice cream's I've ever had. We tried the guava, sakura, green tea, raspberry, and mango flavors. The close up is of the raspberry one which was truly crotch numbing. 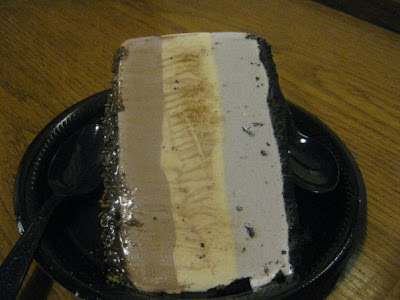 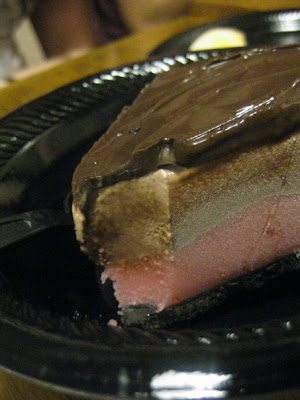 ICE CREAM CAKES!! Oh lord, one was chocolate and raspberry and the other one was a triple layer cake with cookies and cream, coffee, and chocolate ice cream. I may have startled everyone around me because I went cross-eyed and kept running around shirtless, yelling out Armenian curse words. I heard a rumor that those are symptoms of the early stages of diabetes, but in my professional opinion, I'd say a bitch just had too much sugar.

Since I was only there for 3 days, I didn't get the chance to hit up every place I wanted to. But in 3 days, I did find out that I am actually Samoan. When I was checking into the airport on the way to Hawaii, the man checking me in asked if I was excited to be going home. I also had someone ask me if I was Samoan, which was not the first time a person has asked me this question. I also came across several people who are probably my relatives and lucky for you, I took pictures of them. I bear an uncanny resemblance to all of them...mainly in the leg and hair area. 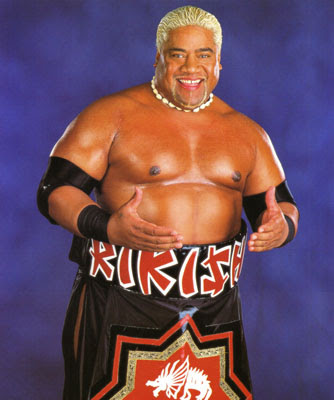 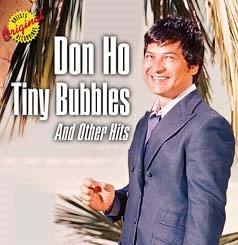 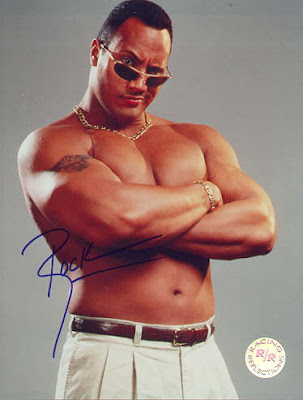